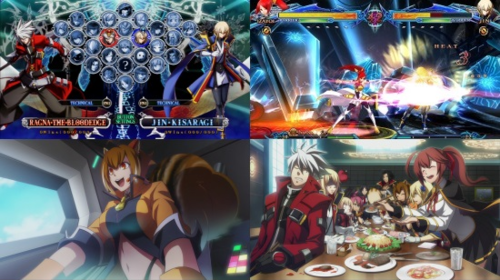 Back to offer more fast-paced fighting game madness, Blazblue Chrono Phantasma sees its roster of characters move location from Kagutsuchi to Ikaruga. In doing so not only are there new stages in this latest version, but there are also seven new character additions, four of which are available from the outset and one of which can be unlocked, while at this time the remaining two are available as downloadable content.

Between Continuum Shift and Chrono Phantasma a few things have changed. While the standard changes you'd expect from a fighting game have occurred, such as balancing characters by changing their damage, knockback on attacks and so on, some characters and the style of gameplay has also changed. Characters who once had moves that used all four of their attack variants have had them now reduced to two - this will be most evident to those who play as Tsubaki or Jin. In order to compensate for this, new moves have been added and the properties of the attacks have changed. Chrono Phantasma also changes up the Break Burst mechanic with the addition of an overdrive gauge - each player has a small circle under their character portrait that, when full, allows a character to use overdrive or break out of a combo. Once used, the circle will start to refill until it can be used again. When overdrive is activated, the player goes into an enhanced state that allows more powerful attacks, and the length of time a player stays in this state is reflective of how much health they have left. As with the previous BlazBlue games there is a tutorial mode to learn the new mechanics of the game, and also a challenge mode to learn the character's moves and combos. While Continuum Shift/Extend had ten or fifteen challenges per character, Chrono Phantasma has taken a cue from Persona 4 Arena by now offering thirty challenges per character. Along with this, the challenges also adhere to the broad style of Persona 4 Arena, such as not giving the player input in exactly what is needed to complete certain challenges - instead they are given a task to complete, such as using a certain move in a combo, inflicting a certain amount of damage in one combo, and so on.

Along with training and challenge modes, a few of the modes from previous iterations have returned with alterations. Score Attack mode, which was once the most challenging, has dropped difficulty quite significantly by having the player choose one of the three routes to take, which shows the ten characters they'll be fighting. The CPU difficulty has also been lowered in this mode in order to accommodate the far more difficult Unlimited Mars mode which saw it's debut in Continuum Shift Extend - this allows the player to face-off against stronger versions of the characters, who also have smarter AI to match their increased power. Abyss mode also makes a return, but has been changed into ten individual dungeons, each with their own number of floors and difficulty level. Abyss works as BlazBlue's survival mode, where the player must descend the levels of a dungeon with very little health being recovered after each battle. While the easiest dungeon has 100 floors, the player can descend quickly as each fight will have them descend around 10-20 floors. Once the player reaches every twentieth floor they fight a boss version of a character, which pauses floor progression but also offers an item as a reward. This can increase the players' stats but can also offer more useful effects such as attacks ignoring the enemy's guard or the player having a constantly refilling special meter. After clearing a dungeon, any items that have been won are kept - the status increases will always be applied to the player but items that offer special effects will be transferred to the Abyss mode shop and can be purchased for use before starting a dungeon using the in game currency.

Online play has returned to the game via Network mode - this time the game has taken more steps to improve the functionality of online play by making a few clever adjustments, allowing players to search for Ranking mode games to make it easier and faster to jump into a match, adding player lobbies that can hold up to 64 players, and all fights having the replay data saved instead of manually selecting it.

Along with these returning modes there is also an addition of a new mode that is unlocked once the story mode has been completed: “Highlander Mode”. This mode is a 1-on-1 battle between the player and a super-boss that has far too much health and takes up half the screen. The problem with this mode is that some characters in the BlazBlue roster are simply not able to attack this boss properly, a problem which stems from quite a few issues. The first is that the boss' attacks are designed to push the player back from one end of the stage to the other - this means that if the player is controlling a character who has an unconventional dash they will not be able to get back to the boss quickly enough to attack. Secondly, the boss is incredibly hard to hit at times if the player is not making use of air attacks - again, some characters don't have the right air combos and damage output in order to do much to the boss, making the fight an extremely tedious, frustrating and drawn-out battle. Finally, the boss is immune to grabs, meaning that if a character's attacks rely on this game mechanic then they will outright not work. This is extremely frustrating for characters such as Bullet, who has a special attack based on a grab and another special that uses one halfway through, meaning she can only do half the intended damage from the latter special attack. While the other modes have quite brutal difficulty, they were at least fair and ensured that all the characters were playable - the super-boss in Highlander mode is completely unfair and is challenging in more of a frustrating way than the other modes. The series had always avoided this particular cliché of fighting games by not having a boss that takes up too much of the screen and having attacks to match, now not only have they implemented it but added in one of the worst super-bosses in recent memory.

The story of BlazBlue is broken up into two modes. Arcade mode continues to meet fighting game standards by giving the player eight matches to fight through with a few of the fights having some character dialogue thrown in. The main story mode though has undergone quite a drastic change for Chrono Phantasma - in the past the story mode was divided into character sections, but this time around the story is broken into three routes, consisting of one main route (the titular Chrono Phantasma) and two supporting routes. Taking another cue from Persona 4 Arena, the story mode feels very uneven in its presentation - although a story for a fighting game it's provided in a visual novel-esque style, which is very is evident at times with over an hour passing by without a single fight occurring. This is especially true for the early sections of the story, although as it progresses starts to reach its climax it becomes loaded with fights that happen one after another. Alongside this, the story jumps back and forth between all the characters in the game quite frequently, and while Chrono Phantasma also retains the gag endings of the previous games it fails slightly in their delivery. Within the story mode the gag endings come to the fore whenever the player is given a choice. Choice A always advances the story and Choice B always gives a gag ending. The gag endings are still rather humorous, building on past jokes, calling out in-jokes from the game and its respective fandom and even parodying certain aspects from video games and anime. However the story has gone for a more serious tone this time around, and as a result having a gag ending appear in the middle of a story like this feels incredibly out of place and breaks immersion, especially if that option is chosen first. There are also points where there are breaks in the story, which requires the player to see all of the chapters within the three available routes before they can advance any further. While this does allow the player to see the same set of circumstances from different character's perspectives and introduces events not known to other characters into the story, it feels messy - the main problem is that having the player jump between three different narratives for the same events over and over starts to wear, making the story tedious and feeling like the story is trying to bombard the player with too much information at a time. These jumps between narratives also makes it hard to tell exactly when certain events happen in the timeline, as each route has a different amount of chapters and contains events that are much further in the past or future compared to the other routes. This, combined with the use of details and references to the BlazBlue manga and light novels that aren't available outside of Japan makes the story confusing and hard to follow at times. Coupled with a poor resolution to the story, it leaves a very disappointing impression overall.

Other than these gripes, the game feels like it boasts the most refined fighting game mechanics in the series - Chrono Phantasma feels like a quicker, snappier game to play than previous entries. The new overdrive mechanic adds some interesting strategy to matches, the new characters the game has added fit really well into the games roster and the online play is the most accessible it has ever been. However, the inclusion of a super-boss character is a real detractor and the story is a let down both in it's narrative and execution - while BlazBlue Chrono Phantasma is a fun game to play at its core, its disappointing story is a huge negative point.

8
Chrono Phantasma offers the most refined mechanics in the series, but is let down by its story and game mode additions