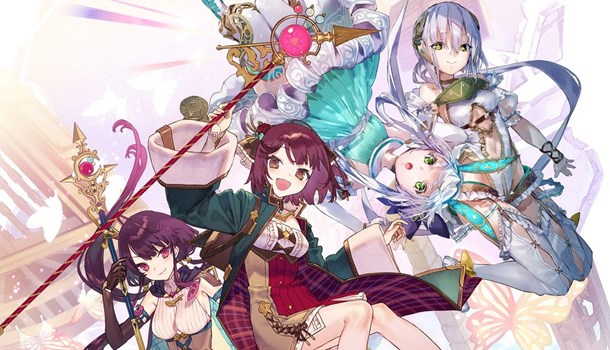 Taking place just after the events of the first game, Atelier Sophie 2: The Alchemist of the Mysterious Dream sees protagonist Sophie and her teacher Plachta leave Kirchenbell in order to travel the land to learn more about alchemy, with the overall goal of making Plachta fully human again. However, the pair get separated when they are pulled into a strange vortex that appears in front of a tree that Plachta has seen in her dreams. Sophie awakens in the Dream world, ruled by Elvira, the Goddess of Dreams. The Dream World, known as Erde Weige, is populated by  people who are drawn there in order to pursue various dreams and life goals, many of whom bear striking resemblance to people Sophie knows. They offer to help her find Plachta, thus beginning a new adventure for Sophie and her new friends in the dream world.

The first thing about Atelier Sophie 2 is that it is an isekai. We find Sophie in a strange new world with its own characters and quirks. This aspect acts as a rather clever framing device to bring newcomers up to speed on the games mechanics and also offer a refresher to established players. The game assumes the player is familiar with Sophie and Plachta from the first game, as well as some of the story events and characters, with Sophie making reference to characters and past events. However prior knowledge isn't really necessary here as the game has a nice set of encyclopedia entries and a "story so far" section to bring players up to speed. Much like the other games in the series, the overall story isn't very grandiose or the main draw of the series. This is a game about characters first and foremost, focusing more on their development than major events. The main plot helps advance the player forward in order to continue the overall arc of the Atelier series games and to fulfil it more efficiently.

The main activities of the Atelier games are divided into several parts. We have gathering, requests, battles and most importantly, the alchemy.

Like the previous games of the series; the player starts out needing to gather items in order to synthesise. The player at first has access to being able to pick up items from the field by hand or using Sophie’s staff to smash tress and rocks. As the game progresses the player will have access to newer gathering items which include but are not limited to sickles, fishing rods, bug nets and pick axes. Each of the new gathering items allows the player to gather new material. A new aspect of this game is the massive gathering aspect, which turns the gathering process into a mini game depending on which item is used. The first example would be the sickle. which has a spinning wheel that the player can stop on an icon allowing bonus attributes, increase in attribute quality or quantity and even affecting how much money is bestowed. The amount of bonuses earned depends on the quality of the item used to gather it, which gives the player incentive to keep upgrading items they have.

This in turn leads to the main aspect of the game and what the series is known for; alchemy. The game opens up with Sophie already being quite experienced at alchemy, so rather than following the previous game's tradition of synthesising a lot of basic things the player won't need multiple times to gain levels, rather the player can jump right in and make what they need. However the main draw of the game is experimenting, trying new item combinations and going back to items you made previously to make a better version. The game helps with this aspect in that, as the player progresses, they learn skills that allows them to gather higher quality ingredients. Tied into this is a friendship aspect; as Sophie talks more with her companions, new scenes will open up, increasing friendship levels and opening up access to new skills that can be used during alchemy.

In practice, alchemy is performed by choosing items of a specific element and placing them on a grid in a pattern that will link them together, ideally filling in as many blank spaces as possible. The friendship skills will grant bonuses for every special link square of certain elements that are linked together, with each character corresponding to a specific element. One character is ice, another is wind and so on. When the player has a complete row or column, these are added to a meter that can give a higher chance of the synthesis being a super synthesis, which will increase the item quality. As the player gets used to how alchemy works, develops stronger bonds with the characters and gathers better quality items, the end result of the process will improve accordingly.

For requests, the game requires the player to present something to the guild, whether this is gathered items, synthesised items or fulfilling hunt requests. As you play, you'll fall into a familiar loop of undertaking multiple quests at once to earn money and item rewards. As your skills increase from competing these tasks, your rewards will increase in value, a sure-fire way to maintain the currency you'll need to buy items from the shops that help with alchemy, restock items that are used in battle or even duplicate an item that was created. This in turn leads to the player ensuring that their party is properly equipped with the items required.

The battles in this game work with all six characters battling at once, arranged into two rows of three, the front engaged in battle, the back used for support. Every character in the game can use alchemy items in battle, however each item has a value to it. All alchemist characters have a Max limit of 999 so can equip anything no matter how strong. The characters who aren't alchemists have a much lower item equip limit making the player think about what items should be given to each of them.

The game works on a simple turn based system, things only getting a bit more complicated when enemies bring up an "aura guard" that needs items and skills of a certain element to break. The game also has various skills that are learned via levelling up and also via the game's ability system, which grants skills and bonuses based on the amount of points spent. These ability points are earned not only by levelling up but also through seeing landmarks and fulfilling various character specific quests, such as having one character use items in battle ten times, using support skills ten times etc.

Tied into this and the alchemy is the way in which Sophie and the alchemists learn new recipes. They either read books (that can be found or bought) but mostly they use the "recipe idea" mechanic. As the player progresses throughout the game, the recipe idea will have various objectives attached to it which will unlock a new recipe. Quite a few are tied into story events but some can be completed fairly easily. Most of these recipes are tied into having an item created, materials gathered or certain enemies defeated. This aspect is in constant use and therefore  the player needs to check it regularly in order to go out and gather in order to learn the recipe.

All these aspects may feel like a lot of systems thrown together, but they all balance and work well as a whole. The player is given quite a lot of freedom to go things at their own pace. If they want to focus on battles, gathering, requests, alchemy they can. I found myself repeating a very methodical pattern of checking requests, gathering, hunting, reporting them, creating items, checking for new recipes, going back to gathering, requests and so on. The game itself has a rather relaxing aura to it. Just letting the player experiment with its systems and discover their own best approach to things.  With regards to the presentation of the game; things look pretty clean and vibrant.  Following the established art style and trademark look all the characters and environments the series is known for.  The game runs fairly well in battles and on the field with no noticeable issues.  The game does have a few long loading times even when played on a PS5.  Not really an issue if you're still used to standard PS4 game loading times but a bit more prevalent if you're used to the next gen.  The music again feels very familiar with the town and field music being rather whimsical and atmospheric.  Each field music highlights certain mods as the weather plays a big part in the games overall presentation on the field.  Par for the course the game offers only Japanese audio, however the cast comprises of anime voice talent so a few familiar voices are heard throughout.  The games presentation gives off a rather focused relaxed and comforting atmosphere.  It doesn't push any boundaries instead opting to stick to its roots and exert the right amount of polish here and there to keep the tone and vibe the series has developed over its course.

Atelier Sophie follows a long line of games that are rather similar to each other, and for those looking for a big shake up to the formula, this is not the game to do it. But for fans of the established franchise who want a nice comforting slice of the familiar. This ticks all the right boxes.

8
A comfortable and relaxing return to the familiar