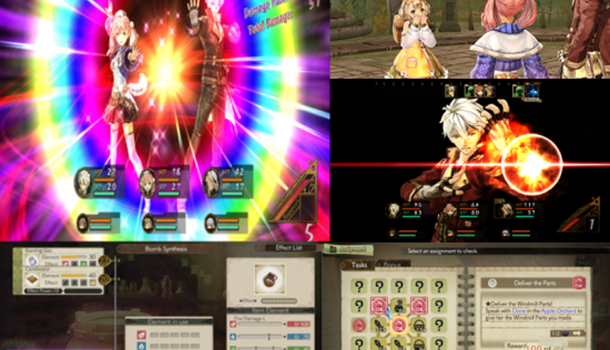 Atelier Escha & Logy: The Alchemists of Dusk Sky is the fifteenth mainline entry in the Atelier franchise, whilst also serving as the fifth title to be released for the PlayStation 3. With such a long-running franchise there is a certain expectation that this series is very difficult to just jump into - however, you'd be wrong in thinking that as each game in the series works as a standalone in it's own right. Whilst the various PlayStation 3 titles have divided themselves into trilogies, the only continuity here is that each trilogy's setting is based in one region and that newer games bring characters from previous titles from the trilogy in as cameos. While these act as a nice bonus for those who played the previous entries, they are not vital to enjoying each game. Along with this, there are the notions that each game requires experience of the past instalments to enjoy them, and that due to the now annual release structure of the games in the series that the mechanics are pretty much copy and pasted from one iteration to the next. While that is true in the core gameplay sense, Atelier Escha & Logy does enough to blend the various mechanics in a way that not only feels welcoming to newcomers but makes them interesting and different enough for veterans to enjoy.

While most RPGs give a long introduction of why the world is in peril and how it is up to whoever the player is controlling to go and save everyone, Atelier Escha & Logy takes a more laid-back approach with how it sets up its story, but also puts the player immediately into action and lets them do whatever they want. The setup for the story is that Escha is an alchemist that is starting the first day of her new job in her town's research and development division. She is also joined by Logy, an alchemist who has been transferred from the big city to their small town in order to work in the same division. Before the game starts it allows the player to decide which character to play as; Escha or Logy. The option of choosing your character doesn't affect gameplay or the overall story events, but instead determines which of the two characters the player controls in the field, which endings they gain access to and the chance to view scenarios and side-stories that are specific to that character.

The main aim of the game sees the alchemy team given an objective to complete every quarter of the year. This objective is placed on the centre of a request board along with twenty-four other requests, displayed as squares and sorted into five rows and five columns. The square in the centre of this board is the main objective, and the eight squares that are adjacent to the middle square are sub objectives. When completed in a way that creates a straight line between 3 of them (including the main objective) the player receives a reward, which can take the form of an item or status increase. The remaining sixteen squares that fill the board's perimeter offer points along with the main objectives - these can be spent on rewards that include skills for Alchemy and Battle, increases in experience gained and reducing the time that certain actions take.

The greatest enemy to the player in the game is time. Since the player is given free reign of what to do, with only the objectives and deadlines as their guide, it is rather easy to waste or misuse the time they are given. Most actions in the game take up time - in order to create items using alchemy time is used by making days pass. It can take several days to travel from the town to the surrounding dungeons, and even gathering items and fighting battles takes up a portion of the day. The game alleviates this as the player progresses - the main way to combat time is to purchase skills using the points from completing the quest objectives. The objectives themselves are pretty simple, mostly consisting of having the player create a certain item using alchemy, exploring a dungeon, defeating a certain amount of enemies or defeating a boss character. While the game does allow the player a lot of freedom, the objectives themselves acts as a very good guide to determining how well the player is doing in the game. In most cases the player may find themselves having completed not only the main objective but all other objectives several weeks before the deadline for that quarter is due.

With the spare time the player is given they can explore the town and talk to the residents. Doing so will unlock special events and lead the way into another objective which seems more like the main story of the game. It should go without saying that the objective that opens up acts the same way as the quarterly objectives, only this time there is one single goal to strive towards with a lot more character interaction and story built around it. Without spoiling what it is, successful completion of this goal leads the way into the game extending it's timespan into a fourth year in which any objectives missed from the quarterly boards can be completed. It also opens up the way to a new dungeon and final boss of the game. While this story is rather interesting, the main problem with it is how easily it feels like it can be missed completely. Sure, there are a few hints throughout the game that allude to it and point the player in the right direction, but as with many of the side stories of the game seeing these depends on how much effort the player has put into seeing them.

The gameplay itself is split between creating items, weapons and armour using alchemy, and battles that use a turn-based battle mechanic. As the player is given access to two alchemists the workload is split between them - Escha is the traditional alchemist that fans of the series will recognise as she uses a cauldron to create items that can be used by alchemists while Logy, being an alchemist that relies on science, doesn't use alchemy this way and instead creates weapons and armour that can be equipped by the party members.

Creating weapons this time around does not require the player to visit a blacksmith and create them by spending money and having the right metal - instead, weapons can be easily created as long as the player has the right recipe. Recipes can be easily acquired by increasing your alchemy level, gaining them as rewards for completing objectives, finding them in dungeons or buying them. The alchemy level is shared between Escha and Logy so there is no need to level them individually. As well as gaining access to recipes, the alchemy level determines what items can be created and what alchemy skills can be used, with each item having a minimum level needed to create it. Alongside this, skills can be used in order to create stronger items and items synthesised by adding items together. In order for the synthesised item to gain the effects of the ingredients used, points known as CP must be used. Access to more CP is given to the player as rewards that they can spend their objective points on, and also when their alchemy level increases. When an item is used in synthesis it also adds element points to the item, which is where Atelier Escha & Logy differs from it's predecessors. These element points can be used along with CP in order to use alchemy skills. There are four elements to each item; fire, water, wind and earth, and each element has skills associated with it. These skills include (but are not limited to) increasing the quantity of the item that is made, allowing an item to be reused in synthesis again and increasing the power of an ingredient item. By using this system effectively, it can be really easy to abuse it in order to get very high quality created items. The fun in alchemy comes from trying to get items with the best attributes and highest quality.

As with previous games in the series, only alchemists can use items. In this case only Escha and Logy can use items in battles, while the other party members have access to an ultimate skill that is charged through various actions in battle. Also, to keep in line with the previous games, three characters are on the battlefield at a time, although in this game six characters take part in a battle, with the other three members in reserve where they can be swapped in for another character when characters take their turn or as the result of a character in the back row defending a character in the front. The most effective method in battle is to build up an attack chain that uses all the characters, with the character who ends the chain providing a more powerful attack, and also jumping to the front row if they are a back row character. Each character has skills they can use but the most useful thing in battle are the alchemy items - depending on what traits they have and how the player decides to use them, these can lead the way to some interesting results. This gives battles a bit of depth as characters can be moved to set points on the battlefield and, combined with each item having an area of effect, brings some strategic elements to battles as players can decide where characters are positioned and when items are used.

While the battle systems does have some depth and the alchemy system has a lot of interesting mechanics, both of which can be easily exploited which makes the game feel much easier than it should. Once a powerful item has been created it can be replicated using a system within the game that takes little effort or resources to use. The player is given money each month depending on the items they've created, quests they've completed and monsters defeated which also funds the restocking of item - this means that any item that is created using alchemy can always be easily restocked. So, once the player has made a powerful item that can win battles easily they've pretty much broken the game, at least until they encounter the more challenging boss characters that are present in some areas, although even these can be overcome using the same method. The game feels like it has done this on purpose to ease new players in to the franchise while making preparations for the tougher bosses easier to manage, and that being said the game manages to be fun and addictive. With the systems proving to be as accessible as they are, players can spend hours lost in the pattern of crafting items, fighting battles and handling requests.

Atelier Escha & Logy: The Alchemists of Dusk Sky is probably the most accessible entry of the series on the PlayStation 3. It combines it's mechanics very well to make a fun and addictive RPG, and while there are interesting characters and entertaining scenarios it's let down slightly by how little importance its main story seems to have in the grand scheme of things.

8
Alchemists of the Dusk Sky blends its mechanics well to offer a fun and addictive RPG.