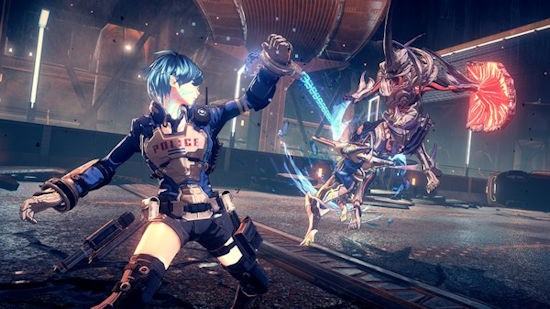 Set in a futuristic city with manking on the edge of extinction, you are tasked with joining the Neutron Police division and paired with a living weapon to defend the population from an alien menace.

The first time I heard about Astral Chain, I knew little of the gameplay - only the dazzling futuristic designs, bathed in neon with character designs by legend Masakazu Katsura (Video Girl Ai, DNA2, Zetman) were really on display. Early trailers looked impressive for the Switch, and with combat being handled by the experienced team behind Bayonetta, chances were high that the game could deliver on the thrills and spills promised.

I was a bit surprised, once I started playing, to see that the game was such a traditional format. Following the same ideas as Freedom Wars and God Eater, the player is stationed at a base with limited freedom of movement around the complex, and then tasked with missions in the field. This is no bad thing as I love the format, but I was somehow expecting more innovation. Instead what we get is improvement by degrees and very few surprises.

Things start out feeling pretty fresh - you're initially racing to attend a scene on a cool looking motorcycle complete with machine guns to overcome obstacles. It's a great introduction to the story, which is delivered through a mixture of in-game exposition and lushly directed cut-scenes. The overall feel was very similar to Silent Möbius, which also features stylised police uniforms, grotesque invaders and neon-soaked cityscapes. Still, if you're going to copy, it's not a bad inspiration as these things go.

Mission deployment usually contains a single main objective, with smaller missions contained within for bonuses and upgrades. You can explore an area to find hidden items, follow clues to foil smaller crimes and even rid the streets of residual alien residue for bonus points, but chances are that by the end, you'll end up in a scrap ending with a boss.

Combat is very well handled here. Your character (and you get the choice between a male or female character at the start with limited customisation) is chained to a captured alien which has been subdued and placed under your control (a'la Evangelion). You can deploy this menace any time you see fit, and it is chained to you at all times. This is handy, as the chain can wrapped around enemies to contain them, or even capture small-time crooks. You can use the chain to jump vast distances, and if all this chain stuff gets annoying, you can just use the beast to kill things. It makes combat pretty in-depth, and upgrades are available throughout the game to your basic kit and your minion.

The Switch handles all this graphical heavy-loading very well. It's arguably the best-looking title the system has to offer, and bodes well for the Ghostbusters Remaster coming soon. Similarly the soundtrack by Satoshi Igarashi (NieR: Automata, Bayonetta, Xenoblade Chronicles) is top notch, and one of the best reasons to track down the special edition which contains a lovely CD full of tracks.

The story, on which these types of games hang their hats, is compelling and entertaining. Characters are fun archetypes, and while the voice acting won't win awards, it's competent enough to keep things rolling smoothly enough.

In all, the game isn't quite the pinnacle of it's genre - that award goes to NieR: Automata - but it's a lovely looking and very smooth example. If you have a Switch and want a game with some depth and a cracking story, this is for you. If you don't have a Switch, here's another reason to consider picking one up.

9
A polished example of the genre with great combat and a compelling storyline. Another gem for the Switch.