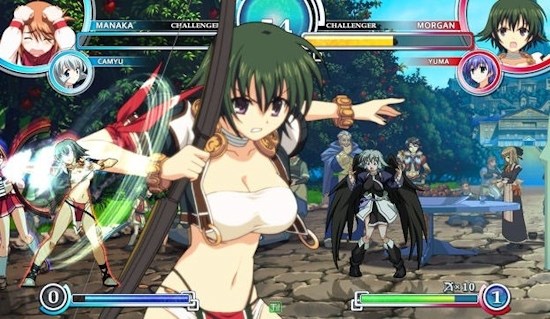 I first encountered Aquapazza on a trip to a Japanese arcade. A fighting game based on the Aquaplus and Leaf visual novels, it's bright, fun and features a cast of wacky characters (mostly teen girls) beating the hell out of each other. It rather took me back to my early days as an anime fan when Ranma 1/2 on the SNES opened up a world I'd hitherto never known existed. I still have my Aquapazza arcade card (a common mainstay of Japanese arcades whereby you can buy this credit-card style item which records your scores) and as a result of a lot of playing, I subsequently picked up the PS3 special edition on my next visit.

Safe to say I've plenty of experience with the game, one I never thought would be released in the West due to the niche nature of the licenses involved, something I had also expressed with Project X Zone on the 3DS, proving that companies are increasingly taking risks on licensed product in the West.

The game features 13 playable characters from titles such as Comic Party, Utawarerumono and To Heart, each with their own signature moves that fit in perfectly with their series of origin. For example, Multi, the cute android schoolgirl from To Heart, attacks with her broom and a variety of cleaning-based attacks, in contrast to my personal favourite, Morgan (Tiers to Tiara), who uses a quiver of 20 arrows to attack opponents.

This multitude of styles throws plenty of variety into the mix, but this is further enhanced by an equal number of support characters who can assist once their meter is full. These paired attacks can make or break a match, so choosing a partner complimentary to your play style is essential. Recharge times vary for each partner too, affecting the flow of play, so choosing isn't just a case of picking the most powerful attack.
The sheer amount of variety this injects, just like Arcana Heart 3 before it (also developed by Examu), is dizzying and leads to hours of fun testing out your ideal pairings.

The mechanics of the game are superb, and a mark of the quality, if you need it, is the game's inclusion in Japanese Arcade magazine Arcadia's Tougeki tournament, a major event in Japan. Other games featured include Street Fighter III, Tekken Tag Tournament and  Soul Calibur - distinguished company indeed.

Attacks are distributed across 3 buttons (soft, medium and hard) and the moves are simple enough to pull off that any newcomer can pick it up and have fun with relative ease. As with all the best fighting games, it's not the complexity of executing moves that make a game, it's the ability of both parties to use the tools available to play a chess-like battle with a focus on timing and strategy instead of dexterity of fingers.

Graphically, the game is incredibly appealing. Large, fluid sprites glide gracefully across the screen, with large, static representations of each filling the screen when specials are unleashed. Personalities are writ large through the charming animations, and the visual flare certainly helps to make it a pleasure to watch as well as play. The comedy leanings of many attacks make it all the more entertaining.

The PS3 version of the game is essentially the 2.0 version of the original arcade game, which means extra characters and 2 story modes, the second of which features Chizuru from the unreleased in the West Kizuato, attempting to break her curse, and in doing so becomes a rather cheap boss. However the interactions are entertaining and it's gratifying to see extra content for the home version.

Overall then, Aquapazza is a pleasure to play, beautiful to look at and features enough variety to stand a lengthy association with any fighting fan. It's only available on US retail/PSN at the moment, but given that PS3 is region free, I'd recommend any anime fan who enjoys a good brawler import a copy as there's been no word on a UK release as yet.

9
A wonderfully tight fighter with fantastic graphics. A love-letter to visual novel fans and a boon to fighting fanatics, it deserves more than a niche audience.