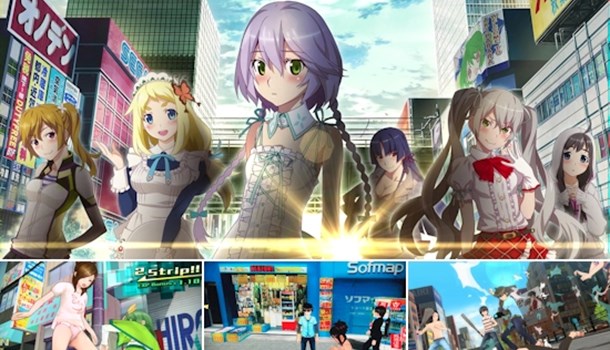 Ah, Akihabara - a worldly constant of geeky pleasures and niche pursuits. It really is a beacon for Japanese counter-culture, and only in Akihabara (fondly referred to as "Akiba" for short) could you set a game like this.

Your avatar Nanashi is lured to a job interview on the promise of payment in rare collectable figures, only to be turned into a vampire (or Synthister as the game calls them) that feeds on the enthusiasm of others. You're saved form your fate by a cute girl named Shizuku who kicks ass and shares her blood with you, stemming your deire to feed but leaving you with enhanced fighting skills. Your mission? Find the Synthisters preying on Akiba denizens and strip them naked to be turned to ash in the sun!

Before I get to the gameplay proper, lets deal with the elephant in the room. This is a game about beating nubile young ladies (and men! - Ed) and then forcibly stripping them in order to murder them. It's a Daily Mail wet dream and it's going to upset people, especially in the wake of recent articles about how women are treated in computer games. Senran Kagura draws the ire of many Internet-wide, and this won't help the cause much. So, if you're offended by the thought of a game that thrives on titillation and can't see the obvious parody, then this isn't the game for you. It's evil, shake your fist and move on.

For those of us more used to certain Japanese appetites in gaming (and can seperate games from reality), Akiba's Trip 2 (to use its Japanese title) has much to offer. The most notable thing about the game is the environment, a beautifully realised and extremely faithful rendering of Akihabara itself. As someone fortunate enough to have visited Akiba on a number of occasions, the game was a delight to traverse - all the shops I know and love, including some that are easy to miss, are represented. For those areas that allow entry, the shop interior is represented by an actual in-store photograph rather than a CG representation, which adds a lot of flavour to the experience. Being able to wander around and walk by Yodabashi, the Gundam Cafe, AKB48, Sofmap and hundreds of others is a real treat, and a fabulous way to show off to your friends about where you've been!

On top of the geographical accuracy, the game also features girls handing out flyers for you collect - these are real advertising flyers and you're encouraged to support the businesses represented in the game by visiting them if you come to Akihabara - clearly, the game loves its environment as much as we do.

But behind this living, breathing Akiba memento lies a game, and thankfully its a very good one. As a member of the Akiba Freedom Fighters, you and your friends will patrol the streets looking for Synthesters. Since they take a poor picture, you can search for them by using your smartphone camera. You'll also be offered side-quests which will unlock rewards. The battles you'll engage in are loosely tactical - you can attack the upper, middle and lower body by hitting the appropriate button, and this will damage your opponents clothes. Once they take sufficient damage, you can try to strip that area by holding down the attack button. You can weild a number of bizarre Akiba-centric weapons, such as rolled up posters and games consoles. More mundane items such as baseball bats are available, but who wants to use those?

If you get your timing right, you can unleash strip-combos and work your way up to an ultra-finishing move. The system is tight and engaging, and well worth practicing as areas can become difficult when you're swamped with enemies. Thankfully, you can fight with a partner, typically one of a number of girls that are part of the ADF. You can instruct your partner on how to fight by using the D-Pad, and you can tag team an enemy too - one of you will hold the victim in place while the other unleashes a devastating attack. All in, its a pretty good system and serves the game well.

As part of your battle, you'll need to upgrade yourself and your partners. You can do this by earning money to spend around Akiba - your buying decisions will visibly upgrade your characters, and half of the fun here is coming up with kick-ass outfits, finding rare items and generally enjoying Akiba's main attraction - shopping!

The characters in-game are all well rounded too. My personal favourite is Nanashi's younger sister, Nana. As well as providing a lot of the comedy through her stilted dialogue (I especially love the "Bro" puns, as she refers to her brother as "Brogram" among others) and self-aware nature as an anime shut-in. However, the real meat here is the dating simulation, whereby, just like Conception II, you'll grow closer to certain characters depending on how you treat them. There are multiple endings and the game keeps track of you in multiple ways, so try and make the girl you like the most as happy as you can.

The game also has a lot of in-game widgets. all handled through your smartphone. Rumours around Akiba can be tracked on newsboards, texts and alerts will be send directly to you, your camera will reveal enemies and you can even set your phone's wallpaper with images earned throughout the game and as rewards for boss-battles.

In terms of niggles, yes the game has a few. Each block of the game area has to be loaded, so you'll be watching the load screen more than is preferable. Draw distance isn't great either, with characters appearing as shadows before walking close enough to gain definition. That said, having a virtual Akiba in your pocket is still one hell of an achievement, and it'll be interesting to see how many of these issues are fixed in the upcoming PlayStation 4 port.

Akiba's Trip is a layered, enjoyable game which offers a great deal to find, explore and, well, strip. The game is a clear love-letter to a wonderful and unique part of Japan, and anyone with even a passing interest in this most eccentric of towns should pick up a copy as soon as they can.

Akiba's Trip: Undead & Undressed is coming to Europe for the PlayStation 3 and PS Vita in October, and (at a later date) to PlayStation 4. You can visit the official website here.

9
If you can live with the central concept, this is a wonderfully absorbing, layered game with tongue planted firmly in cheek. A must for fans of Japan's Electric Town.