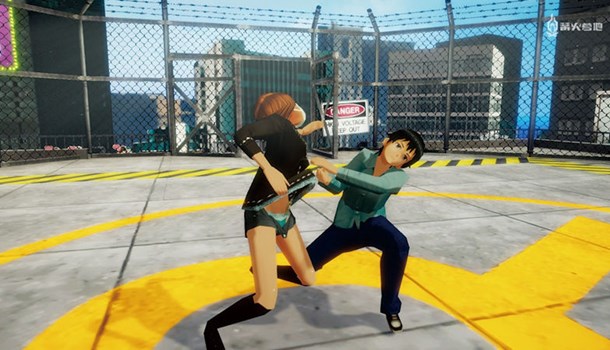 Akiba's Trip: Hellbound and Debriefed is a PS4 remaster of the first game in the Akiba's Trip series. Until now, this was only available in Japan as a PSP-only game. To celebrate the series' 10 year anniversary, it is now available in the west thanks to Marvelous Entertainment.

The story takes place in Akihabara, which most people will know as the electric town of Tokyo, or now more commonly known as the Otaku Mecca. The area of Tokyo home to copious anime and manga stores, maid cafes and various places that will appeal to anime fans in general. The game revolves around Shadow Souls which are a type of vampire that can walk around during the day but will burn to ashes when their full body is exposed to sunlight. Hence the "Strip" pun in the title of the game. Battles revolve around your character, a Recently turned shadow soul fighting against the other shadow souls of Akiba.  The objective is to strip your opponenets of their clothes while at the same time preventing  them doing the same to you. It's a very silly mechanic which the game plays up alongside its anime aesthetic. The game has various references and stereotypes of anime culture, all of which anime fans will appreciate. But these references and jokes can't save the game from its biggest failing. The game is not fun to play.

Firstly, it becomes very apparent early on that the game is a very basic remaster of a PSP game. The only upgrade is increased resolution, with no tweaks to a game that follows design philosophies that show it was on hardware with limited capabilities. The constant loading times between areas (which on PS4 should be all but eliminated), open empty spaces to make use of the limited power and draw distance, and a few other design choices that were outdated even back then. The game's combat doesn't feature a lock-on, which means there are instances where attacks will miss the enemies or it becomes a stream of button mashing in hopes of landing a hit. The game has an equipment system but can be only accessed through the hub map as the equipment changes the appearance of the main character. The sound is also rather tinny and compressed.

In short it's a bad remaster of a game that wasn't that great to begin with.

There are a lot of frustrations with the game. So much so that it feels more archaic than it actually is. The increase in resolution really shows how basic the art and animation of the original game was. The world feels empty and dull with a lot of open space, grey textures and blurry images. Whether this game captures the feel of Akiba circa 2010 who can say but it just makes the whole area feel really dull and boring. The story is daft and fun, but if you want a daft story set in a Japanese city where you can run around and fight; the Yakuza series does a much better job at this. Even the PS4 remaster of Akiba's Trip Undead and Undressed does a better job as that's the game's sequel which made a few improvements over the original.

The effort to bring this game out should be applauded but in all honesty it's not really worth your time. There's nothing here the sequel doesn't do better.