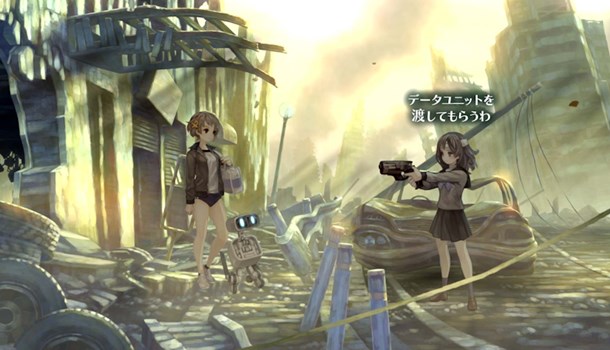 From Vanillaware, the studio known for Dragons Crown, Odin Sphere and Muramasa: The Demon Blade comes a new game, 13 Sentinels: Aegis Rim. A huge departure from the studio's usual forte of creating fantasy action/beat-em-up style RPGs that borrow heavily from mythology, fairy tales and folklore; 13 Sentinels is a Science Fiction Visual novel mixed with a real time strategy RPG that involves Giant Mechs, Aliens, Time Travel and plenty of high school teenage angst. While a bit wary of this game at first, seeing the stunning art design and being interested by the idea of playing a narrative game told from 13 different character perspectives, it succeeded in piquing my curiosity.

I'm glad it did. 13 Sentinels: Aegis Rim is one of the most fascinating games I have played in a good while. The game splits focus between 13 different characters, any of which the player can choose to play in order to advance the story. When first starting, the game locks you into a linear narrative and chooses the character you play in order to set up the story and introduce the main cast. Tied into this are a few battles involving giant mechs tasked with defending a terminal from an alien invasion. This segment of the game lasts around 3-4 hours and is a good taste of what's in store for the player.

Once this section is done, the game opens up and allows the player to choose to participate in battles as they see fit, check the previous unlocked events and advance the story by selecting which character they would like to play. Each of these 13 characters has their own story that intertwines with the others in really clever ways. The game does not overtly prioritise any of the characters the player has to choose from, instead allowing you to pick whichever of the selection appeals most. The game has subtle ways to influence the player's decision by giving certain characters more focus in the story's of other protagonists, or by referencing them heavily - the game will lock progression at certain points if a necessary path hasn't yet been viewed, and it does this by laying down certain requirements. These are such things as seeing a certain event in another character's story, completing enough battles, completing a total percentage of the overall story and so on.

The adventure section plays like a more interactive version of a visual novel, where things play out in real-time and the player advances by having conversations with characters, thinking about key terms that have entered their memory and linking them back into a conversation they are having. This interactive approach helps the proceedings feel more like a game than most visual novels, that simply require you to read what's presented. Conversations are broken up into sections, with enough an option to pick new conversation topics based on events the player has experienced - this adds an element of thought and strategy.

The other half of the game is the destruction section, which sees all 13 characters pilot giant Mechs (known as Sentinels) to defend a central terminal against alien invasion. Each mission sees the player assign a strike force of 6 characters, with the remaining crew either being unable to participate or assigned to the defence team, neither of which can be controlled.

The game allows customisation of mech attacks by way of upgrades or new skills. There are 4 types of mech spread across the 13 characters and each has strengths and weaknesses. Finding the right balance and planning ahead is crucial. The game stresses the importance of balancing the team and rotating out the characters you use by introducing a mechanic that causes characters to be out of commission if they fight too much. Like most mech anime, where children fight against aliens, fighting in the Sentinels causes major stress to the pilot and fighting in multiple battles with no rest forces the pilot to sit out of the battle once their stress gauge is maxed out. This leads the way into a bit of strategy and ensures that one set of characters won't be given priority over another. The game here is a real time strategy, think of it like a tower defence game meets XCOM but in real time where gauges are filled to take a next action.

The story is the game's strongest aspect. The game is a time travel story with characters from different eras, from the end of World War 2, the 80's and beyond in the near and distant future. The story features a lot of mystery and intrigue, with a lot of time dedicated to piecing together the various character relationships, which era they originated from, what their overall goal is and how their actions have/will impact the overall story.

With the way the game is organised, there is potential for certain things to make little sense at first due to the order the player may choose to view the character stories. The main enjoyment I've found is seeing the story play out, come up with some theories and see the story from another character perspective confirm what I thought or take things in a direction I was not anticipating. The narrative of this game has been one of the most fascinating I've seen in a while, and one of the most interesting takes I've seen on time travel combined with giant mechs fighting aliens.

The presentation also deserves special mention. The art is gorgeous. Vanillaware is known for creating beautiful 2D sprites with stunning background work. Here this is taken up several notches with incredible lighting effects, great character designs and cool mechs all woven together to create a fantastic visual experience. At the time of this review the game only featured a Japanese audio option, however an English patch is on the way. The voice work in the Japanese version is incredible, featuring a lot of famous anime voice acting talent I'm sure our readers will instantly recognise.

While this may be a departure from Vanillaware's usual style of game, they have put together something incredible here. An amazing story presented in a superb and unique way to deliver one of the most fascinating games I've played this year. I highly recommend anyone who is a fan of science fiction to seek out this game and enjoy the spectacle.