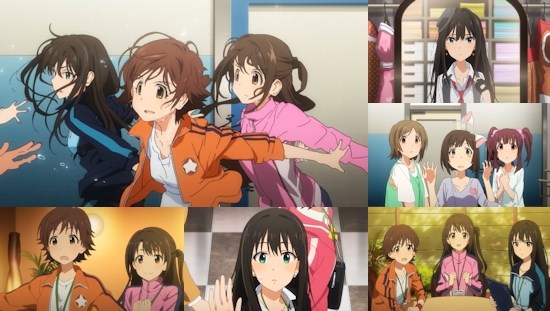 If you've been following industry trends over recent years, you can't have failed to notice the massive boom in idol anime series - although it isn't exactly a new genre per se, throwing idol characters into series has become commonplace in shows from Log Horizon to KanColle and beyond, while the success of Love Live and Aikatsu in particular for its differing demographics (at least on paper) has seen a scramble to replicate their popularity and marketability, in the knowledge that a successful series can generate untold amounts of money in merchandise, CDs, concerts and so on.

Compared to all of these young whippersnappers, the iDOLM@STER franchise seems like the wise old man of the anime idol business - it remains a hot property at its video game roots, it enjoyed a decidedly crazy mecha anime series back in 2007, and finally received a popular "proper" anime treatment in 2011 which led into an equally successful theatrical film. This winter season, it's the turn of iDOLM@STER's mobile game sister to take centre stage, as Cinderella Girls gets an anime outing of its own - with a ridiculously large cast of characters to choose from as a result of that heritage, is it going to be a case of too many idols over-crowding an already packed stage?

Whereas mainstream iDOLM@STER follows the fortunes of a tiny idol company trying to make it big, Cinderella Girls takes the opposite route, as the establishment at its core - 346 Productions (pronounced Mishiro Productions in a touch of Japanese wordplay) - is already a hugely successful one. Rather than throwing us straight into the world of successful idols however, the series follows a new programme put together by the company named the Cinderella Project, which looks to find and nurture exciting new talent.

For these early episodes, we see the unnamed (but decidedly memorable) producer in charge of the project track down and convince three young potentials to join the project, with varying degrees of ease. While two of the girls are bubbling with enthusiasm and excitement about the possibilities laid out before them, the third - Rin - really has no interest in the idea and is resolute in this disinterest despite the dogged persistence of the producer to convince her otherwise with his admittedly limited repertoire.

Of course, eventually all three girls sign up to become "Cinderella Girls", and Rin, Mio and Uzuki join the 346 Productions stable at its newest talents, where they're introduced not only to the company's opulent offices but also its bewildering array of idols. With so many characters on show, thus far none of them really stand out beyond their character designs and one-note personalities that accompany them (with only a little more fleshing out of these characters afforded our main trio), but with two cours of programming to fill there will surely be plenty more time to explore their motivations and personalities just as the original iDOLM@STER succeeded in doing with its cast.

It's arguably only once this cast has been assembled and the rubber hits the road that Cinderella Girls really shows what it's capable of, and as a result episode three is a great example of a series of this kind at its best - the entire instalment follows the new trio as they prepare for their first ever concert as backing dancers, from the hard work and training through to the sheer terror of stepping out on stage for the first time in a role for which no amount of hard work can prepare them. It's an excellent take on events that bodes well for the rest of the series if it can leverage the raw emotions that such occurrences bring forth to further build its characters and the bonds between them. The final concert scenes of this episode are also a great example of what the show can bring to bear in terms of animation quality to add to an enjoyable aesthetic throughout for the series, even if the rest of episode three does suffer in terms of quality to make way for its big finale.

The biggest issue that Cinderella Girls has to face however is that feeling of "seen it all before" - with so many idol series on the market, we've become intimately familiar with the typical (and arguably unavoidable) story arc of young idols working hard to reach the top of the tree, and I'm not sure that this series has anything to add to that kind of tale beyond having a group of existing, successful idols in the series to give more variety to the show. If you don't feel like you're "burning out" on idol anime then this may not be an issue, but having watched a number of other idol series in recent years (via an interest spawned from the original iDOLM@STER series, incidentally) this might just be one too many in terms of making any real impression on me.

Such ponderings aside, Cinderella Girls has made a pretty strong start so far - its fun, has a strong sense of humour yet still knows when to reign in the jokes, and its animation and character designs are suitably vibrant throughout. Although I'd probably still suggest that the mainline iDOLM@STER anime series is a better place to go for fans new to the delights of idol anime (especially now it's also available legally on DAISUKI), this is proving to be enjoyable in its own right so far with no prior knowledge of the source material of franchise required. Oh, and the music is pretty good too when it puts in an appearance, but that probably goes without saying...

You can currently watch The iDOLM@STER Cinderella Girls in streaming form on DAISUKI.

7
It doesn't bring anything new to the idol anime table, but that doesn't stop Cinderella Girls from being an enjoyable experience that hits all of the right notes in these early episodes.
LATEST REVIEWS