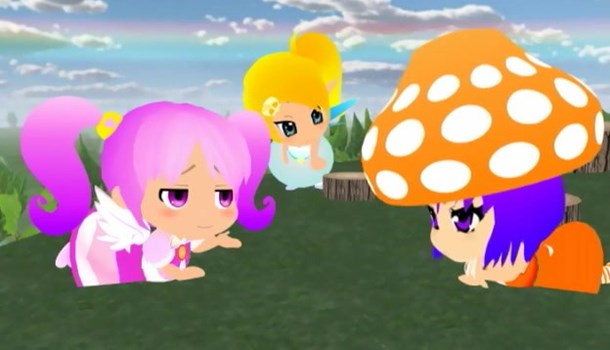 “Hey wait a second, I don’t remember there being a review of season one of this show on this site!” Well, that’s because there isn’t. Season one of gdgd fairies is just too powerful, too raw to behold and survive! Okay, I’m skewing things here - the first season was mostly looked down upon as a weird and ugly CG monstrosity and so avoided. It was only after a few intrepid souls stepped up to the plate and actually watched it that it was discovered that the show may actually be of some not-insignificant merit. Now, older and wiser, I approach season two of this bizarre show to see if it is worthy of praise.

The show centres on the characters pkpk, shrshr and krkr, tiny fairies with little magical power as they generally fart around and do funny things in a series of set types of scenes. The largest single section of  the show has the fairies drinking tea and talking about random topics, or trying out their magical powers in a blank room that allows whatever they wish to become reality. The final, most well known and perhaps the most outlandish part of the show is the dubbing lake, where the cast of fairies are shown a clip of terrible, low rent CG and they dub a few lines over it, utterly ad-libbed.

You know that you are on to something special with gdgd when the first scene of the second season is of a press conference where the cast are apologising for the first one. The show then proceeds to repeat the very first sketch of the first season with an utterly straight face before it devolves into a mind-bendingly absurd conversation about the nature and pronunciation of “deja vu”. To put it simply, gdgd fairies is nuts. The good kind of nuts. The kind of nuts that is so utterly absurd that you begin to wonder about the sanity of the staff who wrote it. It is also, sadly, the kind of nuts that sounds dull when you try and explain it, as is also the case with much is in the execution, and in particular the visual design. The main cornerstone of why the show works is that it is utterly self-assured. This show is not the result of inept flailing but of the guiding hand of those who know exactly what they are doing. This strong intent props the entire shop up and turns it from a mess into a tight, razor-sharp comedy.

Perhaps the biggest initial turn-off for people first coming to gdgd fairies is the CG art. At first glance it looks lazy and cheap, especially in the backgrounds. It all looks thrown together - textures warp and break over shapes, colours look garish - one of the main sets is even utterly blank! This is the great deception of gdgd fairies, as it actually knows exactly what it is doing with it’s tool set, managing to pull off something thoroughly entertaining within its CG style. The camera swoops around with wild impunity to show you around the scene without the need to re-draw everything, making everything a great deal more active and fluid even with the stilted movement of the various actors in frame. The character faces are entirely digital, with expressions changing directly from frame to frame is something which starts out as strange to watch but eventually grows on you in its charming way. The CG also allows the creators to have genuinely odd, creepy, or ugly models (some of which look generic enough to have been pack-ins with the software) in the show, usually performing some kind of energetic action that would take untold hours of drawing otherwise. Using the CG, they can look their terrible and shocking best for the whole of their appearance, even if that appearance involves bending over and having a gigantic screw rotate around your forehead. Once you get over the initial revulsion the design really begins to grow on you.

It is no overstatement to say that the show is held up by the sheer quality of the voice acting performances of the fairy cast, which provide the vast majority of the humour in the show. Having already done one season, the cast are now utterly at home with their characters and with each other, and this really shines through during the ad-libbed sections of the show - the dubbing pond, for example. The cast chat amongst themselves, make little asides, and sometimes simply corpse up with laughter - all of which is reflected in the CG style and so helps to make it feel more natural even with the outlandish art style. Watching the cast react so genuinely to the show they are helping to make gives the show a lot of clout with it’s humour - this isn’t being made with constant winks at the camera or artificially; even the voice actresses are marvelling at how absurd it is, after all.

This isn’t to say the scripted sections of the show are any slouch, and the performances of the voice actresses really sell what could otherwise be a rather mundane joke in many cases - the little stutters and affectations draws the humour out in a big way.

Gdgd fairies is great - a welcome breath of fresh air with its quirky sense of humour, bizarre art style, and some amazing performances from the voice cast. There is nothing quite like it, at least in my own recent memory, and it certainly deserves to be seen by more people.

You can currently watch gdgd Fairies in streaming form via Crunchyroll.

8
Genuinely great comedy, free of all the normal crutches and utterly unafraid to be flat-out bonkers.
LATEST REVIEWS