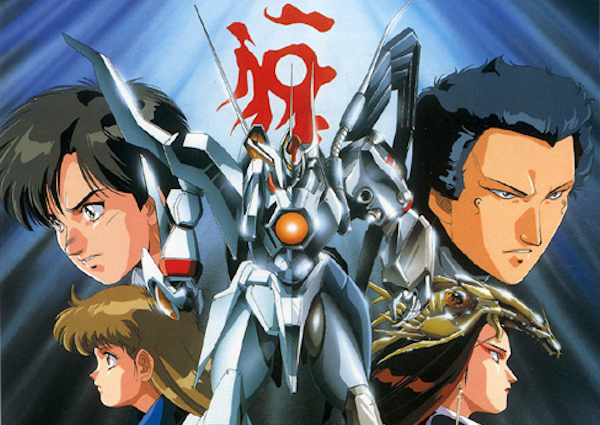 Zeoraima is a part of Manga’s re-released back catalogue and for a cheap title, it provides and for a cheap title, it provides a good couple of hours of quite decent entertainment, if you like your mecha, that is. Bear in mind please, that if you are looking for Evangelion type mecha as we are commonly accustomed to, Zeoraima predates Evangelion by quite a few years (1988 I think!), and thus, its quite, interesting as you will see…

The show fits my usual requirement for animated science fiction… give me apocalypse or give me death, and thankfully both are met with plenty to spare. The show revolves around the fight between two forces and their urges to destroy the world and reunite under a common ruler. The name for this plan is “Project Hades” with Hades being the eventual name of the new world. For those who know your greek mythology, Hades is the name of the underworld, or hell. I bet people would be clamouring to live there! ¬_¬

The story focuses around the original betrayal of the Steel Dragon Society (the bad guys with the army of giant robots) by a psychotic scientist called Masaki Kihara. He was the one who stole the Zeoraima, the biggest of the giant robots and hid it. He died, thankfully, but his legacy lived on in the form of his “clones” and the embryos of the pilots he manipulated.

Initially, it’s all a little hard to grasp exactly what is going on, why people are fighting and exactly who this fellow is. But as the minutes fly by, and the cheesiness of the dialogue passes in one ear, out the other you slowly learn the sad truth that the entire thing is just one big ego trip. Not exactly the most expected of plot twists, but, admittedly one of the better examples I have seen in recent times. When the idea comes across that everyone is fighting merely because they were genetically programmed to do so you will despair, as you can immediately grasp what is happening, and not with excitement.

I will not mention names here, as it’s a little bit pointless. The characters aren’t stunning and are rather clichéd. You have the “hero”, the main focal point and the pilot of the Zeoraima who is a heroic coward with the split personality of the psychotic scientist. You have a ruler of an evil organisation who is kind at heart, but utterly merciless and who appreciates a good f**king and then you have the sub characters who in themselves aren’t memorable, but I suppose have enough of a past history behind them to at least make you care about what happens to them. The creators certainly tried when It came to the character design, and did at least give them depth, for that I am thankful.

As usual, I viewed the English dub in the middle of a crowded train, unusually I decided to provide entertainment for the people around me, and 5 of us watched the show with many laughs coming from some of the lines in the dialogue. The most memorable to me being:

… which admittedly cracked me up as obviously, the creators had not been in high-school for quite some time! I wil give credit where credit is due however and mention that the actors who performed the parts did an excellent job considering the material they were presented with. In fact, in my opinion, the did a much better job than their Japanese counterparts who sounded rather dull and bored at times.

The only major critique I have, with most of the comments above just being my opinion, is the artwork. Zeoraima is desperate for a remastering. The quality of the art is simply terrible. Obviously for its time It was extremely good with some scenes being as well rendered as the original version of Evangelion. I wish Manga had the finances to go over their back catalogue and do some touching up of some of their releases, hell, if this got half the attention Akira had, it would look ten times better.

6
Not the best available, but certainly an entertaining classic!
COMMENT AND DISCUSS
blog comments powered by Disqus