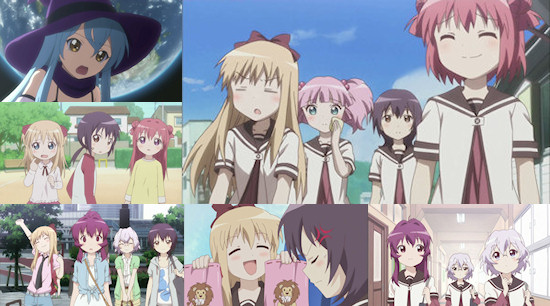 A group of girls covering a wide gamut of character archetypes and all with some underlying degree of Sapphic lust - what could possibly go wrong?  One can only imagine that this was the thinking when it came to commissioning YuruYuri to make the transition from manga to anime, and given the relative popularity of the series it seems to be a pretty smart one.  That said, the first few episodes of the show were hardly pure-spun comic gold...

Having introduced its main quartet of characters initially, the remainder of the series fleshes things out by introducing the full compliment of the school's student council, an entirely unexpected twin sister for one member of said council, and a science teacher with a proclivity towards making things blow up.  As per the lead characters, there are anime tropes aplenty here, including the nigh-on mute girl who can only be understood by one person, which in itself surely ranks as the most irritating of character traits you can find in anime.

Equally, the show's sketches take in some pretty typical anime fare, such as a visit to Comiket, a beach episode, Christmas and a school trip.  No points for originality here, that's for sure, although I suppose the scope of settings for school-based anime has been exhausted entirely by this point.

Of course, when it comes to comedy you can usually forgive any lack of ingenuity as long as the jokes are good, and in all fairness to YuruYuri it does sport some improvements along these lines.  Tellingly however, its constant reversion to sexual innuendo and fantasy isn't where the best comedy comes from - some of the show's funniest moments are either slapstick in nature (Akari's "barrel roll" is a piece of simple but devastating visual comedy perfection) or come via smart script writing (science teacher's musings on eating blowfish and the like consist of some of the show's best one-liners), to the point where you wonder why it doesn't use these tools in its arsenal more often.  But no, instead it's only ever a few minutes until Chitose gets a lesbian fantasy-induced nosebleed or one character tries to force themself on another, at which point you might as well turn your brain off again until something else interesting rolls around.

Ultimately, YuruYuri seems to offer little that will lift it beyond the realms of mediocre, forgettable comedy anime that litter our memories like so many corpses of years gone by.  As a throw-away piece of humorous entertainment however, what we have here is a colourful and ultimately cheerful little outing that manages to amuse more frequently than some of its peers (I'm looking at you, Nichijou) despite its over-reliance on sexual humour that soon becomes tired and old.  As a quick, online streaming distraction after a bad day in the office, you could certainly do worse.

6
It relies too much on innuendo and sexual humour, but beyond that YuruYuri's colourful, energetic and occasionally funny outlook is bound to win over some fans.
COMMENT AND DISCUSS
blog comments powered by Disqus