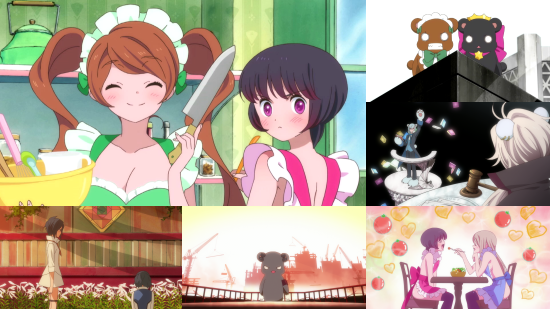 I am sitting here, cat to the left of me, cat to the right, and I am stuck in the middle of writing about something which has actually left me feeling a bit... weird. For some reason, I just want to prefix the word “Growl” to everything.

So, Lesbian Bear Storm, Love Bullet, Yurikuma Arashi, whatever you want to call it, is the newest creation from Kunihiko Ikahara, the creative brain that gave us Revolutionary Girl Utena and Mawaru Penguindrum. As its successor, Yurikuma Arashi is both beautiful, startling, disturbing and weird. I think that’s the nicest way of saying it growl... dammit.

The bears of the world were perfectly normal. They ate fish, went to use the bathroom in the woods, and lived normal bear-like lives. Then, a meteor struck the planet and its energy turned them into lusty and hungry carnivorous beasts with a taste for human blood. A long war ensued, with bears eating humans (mostly the tasty girls) and humans shooting the bears. To create peace, the Severance Wall was constructed to keep them apart. For some naughty criminal bears, the lure of tasty human girl meat was just too much, and they found themselves hunting to relieve their intense longing and hunger. Growl.

We now switch to an all-girl high school on the human side of the wall, ruled by a strict ideology whereby girls who don’t fit in are democratically elected to become excluded and invisible to everyone in the school. This is the Invisible Storm, and it drives girls to their death. Bears love eating invisible girls. Growl.

Thanks to the meteor, the hungry bears can magically transform. When two affectionate bears infiltrate the school they discover Sumika and Kureha. These long-term lovers attract the unwanted attention of these lesbian bears, forcing the Invisible Storm to react. Their relationship is tested, terminated and the bears become, suddenly, less hungry. The focus of the story changes as the now solitary bear-hating Kureha becomes the focus of both hungry bears, Lulu and Ginko, who have interests in her that transcend simple hunger pangs. Their hunger no longer lies in their bellies. Groooowl.

I have been struggling to write what Yurikuma Arashi is essentially about, and in the end the series can be summed up in a single word: love. The series is about love, the value and quality of love, and the value of giving your true feelings to someone because that "promised kiss" could change the world. What the series isn’t strictyl about, although at times it does seem that a large proportion of the runtime is devoted to it, is monsters coming over a wall to eat people, because that is a just a bit similar to another popular anime which will remain un-named. But at least that un-named series is easy to follow, and halfway through you aren’t wondering what you're watching.

The problem with Yurikuma Arashi is that the story is inaccessible. The series has bears, innuendo, it’s cute, it’s funny, but the structure and the continuous flashbacks and side stories makes retaining the main thrust of the story and piecing together the actual narrative difficult. I’d go so far as to suggest that, as with Penguindrum before it, Yurikuma Arashi is trying too hard to be smart for its own good. There is only so much you can do when you are relying on a court run purely by catchphrases and when your main mystery trope is when everyone in the school is a bear in disguise.

Yurikuma Arashi is incredibly well-produced from a voice acting and artistic point of view. The narrative may be a mess, but the character designs, backgrounds, animation, action scenes and artistic flair are just perfect. Even the little elements, such as the stained glass in the school, with its use of bears and doves, have the same level of detail as the transformation sequences. My only real criticism is the limited sets and the re-use of scenes throughout the series. I am not sure how many times I have seen the sequence for the Bear Court, but it has stopped being sexy. (Shabadadoo - Ed.)

I have been finding many English dubs released these days to actually be good and, in some cases, comparable or better than their Japanese equivalents. Case in point here the actor for Lulu. Lulu’s character is bouncy, fun, tortured and ditzy, and this comes across almost perfectly in the English dub. In the Japanese, it’s just different and, sorry to you subtitle-fans, I don’t think it works so well. Similarly, the actress for Ginko has absolutely nailed the character.

I think it’s hard to say whether I have enjoyed Yurikuma Arashi. I think I have, but I have also found it hard to watch. Is it so hard for events to happen chronologically? For flashbacks to be a rare occurrence, rather than every other scene? It makes it very difficult to follow the show, especially if you are watching it over a few days, and are distracted by lesbian bears. Yurikuma Arashi reminds me a lot of its predecessor - as with Penguindrum, the strength with this show lies in its direction and artistic flair, but like Penguindrum it’s also much longer and more convoluted than it needed to be.

6
Not quite the perfect lesbian bear storm.
COMMENT AND DISCUSS
blog comments powered by Disqus