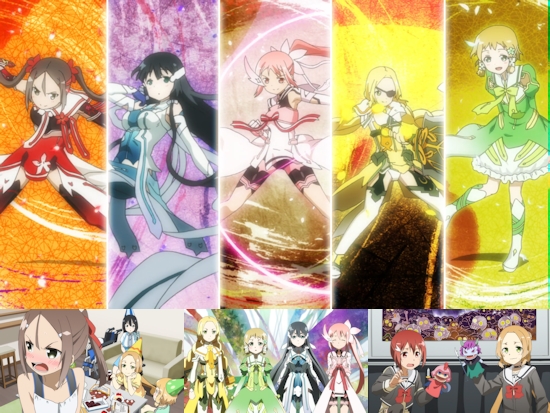 Yuki Yuna is a Hero

Ever since Puella Magi Madoka Magica aired to huge critical and commercial success in 2011, the race has been on to create "the next Madoka". Many series have tried and failed - Day Break Illusion was one of the most overt failures in that regard, while Selector Infected WIXOSS had its moments but ultimately fell short, as two of the more notable recent attempts that didn't make the grade.

More closely in keeping with the series to which it is already being compared than those examples, Yuki Yuna is a Hero began airing last autumn while keeping its cards very close to its chest, with key visuals and the show's synopsis focusing more on some cute characters running an after-school club rather than anything more sinister - one of Madoka Magica's greatest initial tricks was in acting like another cute little magical girl show before pulling the rug out from under the viewer three episodes in.

Anyhow, let's not get ahead of ourselves here. Yuki Yuna is a Hero introduces us to a world not entirely dissimilar to our own, and with it brings us into contact with a group of four middle school girls who are the members of their establishment's "Hero Club" - tasked simply with helping out anyone who requires their assistance around their local community in any way that they can. As a close group of friends, these four girls - club leader Fu Inubozaki, sister Itsuki, wheelchair-bound Mimori Togo and titular character Yuki Yuna - work hard and have fun in the process of going about their daily business.

However, this quartet have also been gathered by Fu under another pretence, as girls who have scored highly in an aptitude test to become actual heroes, saddled with the job of protecting their world from utter destruction by a group of twelve monsters known as "Vertexes" that could attack at any moment. When Fu's worst fears are realised and her group are picked out as the chosen ones who have to shoulder this burden, we seem all set for a series of "monster of the week" battles and the emotional drama that comes from it, but that's when the focus of this series begins to shift markedly...

Much like Madoka Magica, it's difficult to talk critically about Yuki Yuna is a Hero because to do so is to invite spoilers into the conversation, and once those important plot points have been aired much of the show's impact is inevitably lost. Unlike Madoka Magica however, this series doesn't really start to pull back the curtain on the harshest truth of its world until fully eight episodes in - if there's one thing to be said about the show, it's that patience is rewarded, as its poker face is incorrigible until that point.

Then again, even before it starts to roll out its big revelations to the viewer there's still a lot to like about Yuki Yuna is a Hero - it has a rich vein of light-hearted slice of life fare that brings you closer to the characters, which in turn adds impact to its final episodes, and even the show's initial forays into its magical girl-inspired efforts which sees the group learn about their powers and tackle the Vertexes that come out to play tick all the right boxes with action, comedy and some obligatory impressive transformation scenes.

These action scenes ultimately lead into what seems like an exceedingly early false climax to the series, which is the first hint that there is still a whole other story waiting to be told for those willing to see it through to the end. As we've just suggested, the series is worth perservering with for this very reason, as once the viewer (and the main cast) learn the truth and everything falls into place then you're treated to a whole other level of narrative, which not only visits some very dark subject matter but also has some thought-provoking things to raise as discussion points around its central ideas. The only major criticism of the way the series handles its final act is that it fluffs its landing - the final episode closes in a conveniently feel-good fashion which feels out of place and frankly unlikely compared to everything that has gone before, at a point where it should probably have made good on completing its journey down the path it seemes to be traversing.

Assuming that this cop-out in its final scene doesn't destroy all of your goodwill towards it, then Yuki Yuna is a Hero is genuinely a very good series. Sure, its characters all fit neatly into existing anime archetypes (although its handling of Togo's personality and disability is excellent in that it simply isn't a big deal at any point), but those characters are used to their fullest degree - first, as enjoyable protagonists in everyday school life shenanigans, then as believable reluctant heroes who just want to do their best to help others, and finally as confused individuals out of their depth in the face of the realities which confront them. From light-hearted fun to harrowing despair, here is a series that can switch gears between these polar opposite positions with confident ease - a confidence that is justified given its strong story and well-realised ideas.

The presentation of the series is also equally strong - some flaky moments of magical girl CG aside, the show is a riot of colour (particularly when it comes to fighting the Vertexes) with striking character designs throughout, and a suitably insistent soundtrack to back up its tensest and most action-packed moments. It may not be able to strike out in terms of its individuality compared to other series (I'm not trying to make another Madoka Magica comparison here, honest... okay okay, so I'm saying it doesn't look as good as Madoka Magica), but it does its job in an appealing fashion that again matches both its comedy and fraught drama in equal measure.

As a whole, Yuki Yuna is a Hero certainly ends as one of 2014's biggest surprises, albeit a late one - it doesn't seem likely to capture the imagination in the way that "the next big thing" might be expected to, but that doesn't mean that it isn't a great series that does an excellent job of setting up viewer's expectations on multiple levels and then subverting them; sometimes quickly, sometimes over the course of almost half of the series. The result is a fascinating show that expertly blends its elements to full effect as an entertaining and occasionally shocking effort that can make you laugh one moment and gasp the next, and if you have the patience to accept or even enjoy its quiet moments then this is a series you really shouldn't miss.

You can currently watch Yuki Yuna is a Hero in streaming form on Crunchyroll.

8
Yuki Yuna is a Hero is the first post-Madoka Magica series to be worthy of the name, and in spite of some lulls and a flawed ending is well worthy of your time as a result.
COMMENT AND DISCUSS
blog comments powered by Disqus