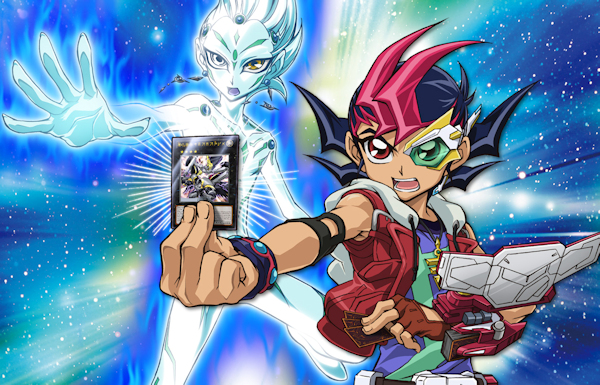 Following directly on from where the Season 1 collection left off; Yu-gi-Oh! Zexal Season 2 collection begins with the finals of the World Duel Carnival. While the main focus of the first season was on establishing the characters and outline for the show, here everything feels established enough to allow the series to focus on duels and develop the plot further.

For the most part this is all handled surprisingly well. As the collection begins, with the finals of a tournament arc beginning, the viewer is treated to some rather entertaining duels. We get to see other characters duel each other, giving a break from Yuma being the focal point. This in turn makes Yuma somewhat of a spectator in the early episodes, instead he spends his time commenting on the action thats unfolding. With the duels being more high level they tend to last a bit longer than previously. Whilst the duels in the first episode were mainly duel of the week style, lasting one or at most two episodes. Here we get duels lasting two to three episodes each. This is in part due to the plot moving forward along with duels. For those familiar with Yu-Gi-Oh!; Zexal is no exception with how it integrates plot into duels. With characters taking time to briefly pause the duel to explain motivations and the plans for their great villainous schemes. The dub - which plays up the comedy here - has the characters comment on the constant monologuing, and urges them to just get on with the duels.

From this the dub continues to poke fun at itself and actually provides some great moments of comedy. Sure, Yuma is still annoying, still says his odd catchphrases but the supporting cast and writing really do help poke fun at things. Whilst not the best dub, it works with what it's given. This helps in the comedic moments but falls flat in some of the more dramatic moments. With the tournament arc we discover the main villain’s identity, their motivation and their ties to Yuma's family. The reveal is rather ridiculous, but the show handles it in a very serious manner.

Once the tournament arc ends we get the first true arc of the sequel series Yu-gi-Oh! Zexal II, which here in the west is still under the Yu-gi-Oh! Zexal banner. Thus we delve back into the quest for the number cards and get more world building, which ties into Astrals’ origins. We also return to Yuma and his friends school shenanigans, with each enemy being a character sent to their school to duel. This leads back to the monster of the week style format which made up the majority of the first season. Considering this arc is technically the start of a follow-on series the change back to this format is understandable. With that in mind the series also falls back into some old habits for the show and franchise in general. There is some sense of escalation at play, with characters playing stronger and stronger cards as a way of showing how good a duellist they are. Also the characters still have the habit of drawing the exact card they need, and pull off miraculous comeback wins at the last moment. While a bit formulaic at times it really can be fun to watch how ridiculous the scenarios get.

Like the previous collection this set contains forty nine episodes on DVD, Dub only, and with no extras. Although if anyone bought the first season they will pretty much know what they're getting already: That is more Yu-Gi-Oh!, and more of the same formulaic approach to story telling. Yet somehow this set just manages to be slightly better than the last one. With more focus ploy and a darker tone, while still falling into the same trappings of the previous episodes and franchise as a whole. Its more of the same Yu-Gi-Oh! that fans have come to expect.

6
A slight improvement over the first set of episodes, but still more of what you'd expect
COMMENT AND DISCUSS
blog comments powered by Disqus