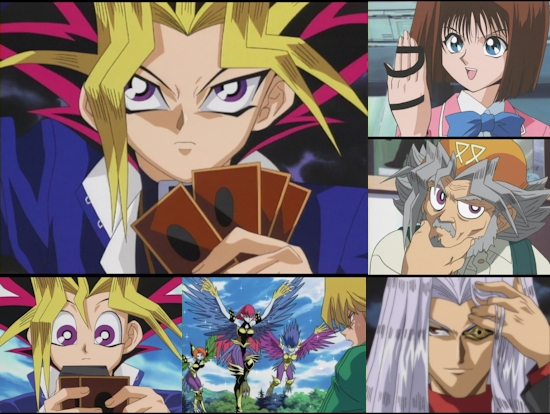 It might not exist in quite the same beloved place of nostalgia as Pokémon or Digimon, but there is nonetheless a large number of people with fond memories of Yu-Gi-Oh. Indeed, much like Pokémon it would be unfair to confine the popularity of the franchise to nostalgia alone - take a look around any MCM London Comic Con and you'll normally find a not insubstantial amount of real estate dedicated to the card game which spawned various anime and manga spin-offs, complete with opportunities to play it.

Given how Yu-Gi-Oh has endured, it's surprising that it's taken this long for the full Yu-Gi-Oh series, totalling over 200 episodes (not that I'm counting with a look of alarm on my face as a reviewer or anything), to come to DVD, but now here it is courtesy of Manga Entertainment, albeit in its edited, English-only form provided by 4Kids and used as the basis of the show's western TV broadcasts.

Although its real life counterpart might be a mere card game, the origins of Yu-Gi-Oh as told by this anime adaptation are decidedly more grandiose, born from a deadly and dangerous game by Egyptian kings known as The Shadow Game. Although this game was locked away lest it destroy the planet, it has somehow survived and evolved into a game known as Duel Monsters, and with it some of the magical powers from Egyptian times have also managed to transfer into the modern era.

Heading up the series is, of course, Yugi, a keen Duel Monsters player whose own abilities are supplemented by his ownership of one of seven so-called "Millennium Items", Egyptian artefacts with magical powers. In Yugi's case, his Millennium Puzzle allows him to call upon the spirit of an Egyptian pharaoh - one who also just so happens to be both a pretty good egg and an excellent Dual Monsters player.

Yugi's simple days of enjoying playing Duel Monsters with his friends are soon interrupted however, as his grandfather - a card shop owner and knowledgeable fellow in his own right - is kidnapped by the foppish and malevolent creator of Duel Monsters, the wonderfully named Maximillion Pegasus. Can Yugi fight his way through an increasingly difficult tournament to face-off against Pegasus and rescue his grandfather?

Thus begins 49 episodes of near-incessant Duel Monsters battles, are rules are explained, conveniently forgotten and built upon into a dizzying mix of attack and defences, monsters and machines, and the kind of silliness that explains the attraction of the series to so many kids. Even when a battle expands over multiple episodes, there's something to be said for the break-neck pace at which it's presented - the flow of each battle is rarely interrupted and it helps immensely in terms of keeping things interesting even as it throws around ever-more nonsensical rules and constructs.

If the action - or what passes for it - stands up pretty well even when viewed through an adult's eyes (or at least someone who plays at being one on occasion), the constant state of melodrama in which the show and its characters exist is a little less easy to jump on-board with - the attempts to ensure that every battle has high stakes quickly become inadvertently hilarious, and the struggle for all of this personal drama to co-exist with the theme of friendship that also runs through the series often collapses into farce. Still, the overall Yu-Gi-Oh experience is pretty fun, and even short of any nostalgia its cheesy, over-acted and goofy presentation can be oddly entertaining.

Then again, any nostalgia you do have for the show might be wiped away by watching it in 2014 - its animation quality is mostly atrocious and brings a whole new meaning to "limited animation", its story is not the tour de force you might remember, and its English cast ham it up to an embarrassing degree. Sometimes it's best not to revisit the things you loved as a kid, and this might well be one of those occasions.

With seven DVDs packed with seven episodes apiece, there's plenty to get your teeth into for this first UK release. It may be bereft of bonus materials but for the most part this first season offers a decent audio and video transfer with some caveats - scenes occasionally look heavily interlaced, and we spotted one episode pulled directly from the show's US TV broadcast (age rating logos and all) as an oddity rather than an issue. The major issue which stands out here once again is Manga Entertainment's continued inability to provide correctly placed chapter markers on these discs, with skipping chapters seemingly dumping you into random points in the episode rather than where you might expect them to take you. While we've merely bemoaned this ridiculous state of affairs in other releases, on a collection with almost fifty episodes aimed at a potentially younger audience it's a major issue, and we're going to lop a point from the release's final score as a result.

Whether you have a current or historical love for Yu-Gi-Oh, then chances are you'll want to pick up at least the first volume of this series no matter what we have to say about it. From an outsiders point of view, it's a fun and frivolous show that is laughably silly... but then again, that isn't always a bad thing, provided it doesn't destroy too many of your cherished childhood memories in the process.

English stereo audio; no extras are provided on these discs.

5
An entertaining yet silly and poorly animated affair that might spoil your nostalgia for it, undermined by poorly executed on-disc chapter markers.
COMMENT AND DISCUSS
blog comments powered by Disqus