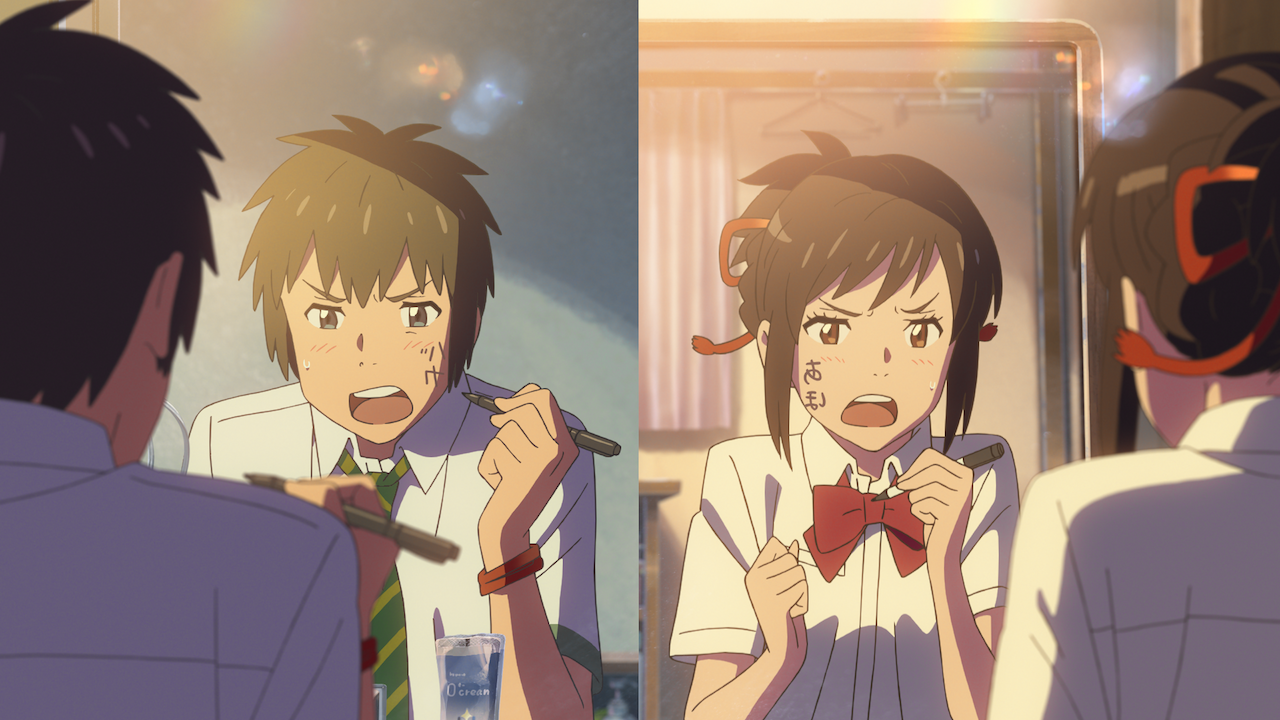 Update (02/11/27): Since this review was published Anime Limited have made a statement about the video issues noted in our review, over on the forums of our friends Anime UK News.

At this point what can possibly be said about Makoto Shinkai’s Your Name that has not already been said? The mainstream media went crazy for the theatrical release, with a flurry of five star reviews and Oscar tips not seen since the furore around Studio Ghibli’s Spirited Away. Even the famously critical Mark Kermode waxed lyrical about the film, calling it “rip-roaringly good” on Radio 5 Live. Here at UK Anime Network we have given the film two glowing reviews already.

As well as being a critical darling the film was also a box office smash. Grossing ¥23 billion in Japan, where it was the first non Hayao Miyazaki (Studio Ghibli) animated film to earn over ¥10 billion. It went on to become the highest grossing anime film of all time worldwide, raking in a staggering $355,298,270, and dwarfing even Ghibli’s classic Spirited Away. Laurence Green commented in one of our earlier reviews that after decades of the industry chasing Hayao Miyazaki's coattails, perhaps we might “see a shift toward an increasing trend of ‘Shinkai imitators’”. This has already begun, with the likes of SHAFT’s Fireworks being very clearly pushed into the same mould in an attempt to be the next Your Name.

If you have already seen the film then you will know exactly what all the fuss is about, if not then you have arrived at the right part of this review: Your Name revolves around two central characters, Taki Tachibana and Mitsuha Miyamizu, who are both seemingly normal High School students. However, the pair are a good distance apart, both in terms of physical distance and daily lives. Taki lives and studies amongst the modern trappings of Tokyo, which is gorgeously realised by Makoto Shinkai. Anyone familiar with his previous work - such as Garden of Words - will know how beautifully and accurately he animates Tokyo, especially Shinjuku. On the other hand, Mitsuha lives a relatively quiet and traditional rural life in Itomori - a small town in the Hida mountains - which is similarly well realised with it’s verdant hues and mountainous landscapes. Though Mitsuha longs for the hustle and bustle of Tokyo, and at one point even wishes to be reborn as a handsome teenage boy living in Tokyo…

Mitsuha seems to have gotten her wish and one day finds herself living as a teenage boy in Tokyo, though upon waking back in her own body she quickly writes this off as a very vivid dream. However, after Mitsuha finds a note - that she didn't write - scrawled in her school text book stating: "Who are you?" it quickly becomes clear that they are more than just dreams, and the pair are in-fact swapping bodies. So, Your Name is, at it’s core, a simple body swap tale. Something which we have seen a thousand times before, through the likes of Freaky Friday, Vice Versa, etc. Though to pigeon hole Your Name along with any of those films is to do it a major disservice. While simple at it’s core there is also a great deal of depth to be found here, if you wish to delve into it. The film explores themes of love, distance, tradition, belonging, disaster, etc. Many of the themes explored in Your Name will be eminently familiar to followers of Shinkai’s work, and here he has perfected each and every one.

Quite a few of the early body swapping shenanigans are played for laughs. Both Taki and Mitsuha have difficulty coming to terms with their predicament, in particular finding themselves in the physical body of someone of the opposite sex. While some of the jokes are nothing if not predictable they are played with pitch perfect precision. And what could be problematic in lesser hands is handled extremely well here. As the film progresses it deepens, and exposes the linchpin of this tale: The way the two protagonists learn and grow from their experiences. Though the comedic element is never quite left behind, it does take more of a backseat as the drama unfolds.

The two leads are very likeable characters, who you can’t help but root for, and the same is true of most of the supporting cast. Making the supporting cast’s reactions to the pair’s behavioural shifts believable is quite a feat, but Shinkai does so here with aplomb. In-fact almost every aspect of the film is a masterclass in how to do this kind of film well. While Your Name consists of many elements you will have seen before, many times over, Shinkai has refined them here and packaged them in such a way that the film never feels anything but fresh and original. We have complained in the past about Makoto Shinkai’s ability to pin down an ending but here he nails it, with a beautiful and heartwarming finale which makes the journey all the more worthwhile. Not only is Your Name his most complete film yet, it’s also his most accessible.

The soundtrack for this film comes from a somewhat odd place, having been composed by Yojiro Noda, the lead vocalist of the Japanese rock band RADWIMPS. Despite the unusual origins the soundtrack is excellent, and fits the film perfectly. Staying out of the way when it needs to and at other times belting out RADWIMPS signature sound. That it is included with the Your Name - Blu-ray + DVD Steelbook Collector's Edition and the Your Name - Ltd Deluxe Edition is reason enough to make upgrading to the top packages worthwhile. Speaking of the soundtrack, a rather nice feature of the Blu-ray is the ability to choose between English and Japanese songs when selecting to the English dub audio.

One area where Makoto Shinkai has always excelled is in respect to visuals, the fidelity and beauty of his animation has been at times simply staggering. This was no different with Your Name’s theatrical outings, which wowed audiences the world over. However, we did find some issues with our check discs which need to be covered. As I write this review there are rumblings of discontent in the darkest corners of the Internet, with some comparison shots of Madman’s masters (on which the Anime Limited release is based) looking inferior when compared to the Japanese original. The images seem to show some nasty compression artefacts and brightness/colour issues on Madman’s master.

Firstly let’s cover the artefacts: While they are there, they are not nearly as bad as some might fear. On my 50” Full HD screen I barely noticed any, and I was looking intently for them. I would be surprised if many people noticed on a normal viewing of the film, especially on a smaller screen. However - for this reviewer at least - the real issue is the brightness (well, Gamma strictly speaking) adjustment. Subjectively this release doesn’t seem to be as sharp or colourful as its theatrical counterpart. The colours appear muted and flattened throughout the movie. Shinkai’s glorious use and range of colours just isn’t in evidence from this disc. Most notably the blacks simply are not black, meaning the contrast is stunted.

But is this a problem? Well, if you have a properly calibrated TV and you know what things like “THX Optimised” and “ISF” mean (AVForums Picture Perfect Guide is a good place to start, if you are interested), then this is something that you will likely find intolerable. Similarly, if you appreciate Shinkai’s works primarily for their visuals then you will likely not find much to love in this release. However, if you (as most people do) just run your TV on its factory settings, with the bright oversaturated pictures that tend to come with the ‘out of the box’ settings, then it is probably not going to be a concern for you.

When all is said and done Your Name is about as close to perfect as any Makoto Shinkai film has been, he has really refined his style here and as a result broadened the appeal of this film. It is just a shame that Madman’s masters can’t do the film justice. If you are a videophile you could easily knock a couple of points off our score, but for everyone else - while not perfect - this release is still highly recommended.

Your Name is also available in Collector's Edition Steelbook: £34.99 and a Limited Deluxe Edition: £59.99 from select retailers and direct from AlltheAnime.com.

9
Shinkai perfects his formula, but this release is not going to please videophiles.
COMMENT AND DISCUSS
blog comments powered by Disqus