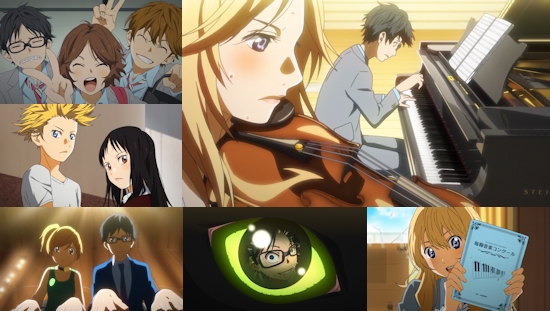 Your Lie in April

Throughout history, music has been inexorably linked to the human condition - it fills our quiet moments; permeates our minds beyond our control to play back in our heads; tell us exquisite stories; energises us or brings us to tears. For those who have the rare talent to play instruments and create music for themselves at the highest level, these feelings and powers contained within music are perhaps even more crucial to their everyday existence.

There are, however, even greater powers at play within the human mind, and for former piano-playing prodigy Kousei Arima one of these powers has him very much in its grasp. After years as a childhood genius - "the human metronome", as he's known thanks to his uncanny ability to recite classical works - Kousei simply can't hear his music any more, and is thus completely unable to play the piano. The reason for this is a simple one - the grief and trauma brought about by the death of his mother, who had more than a small hand in her son's rise to piano-playing prominence.

Rather than fight against this debilitating psychological barrier, Kousei has instead simply given up on music, and instead lives his life just drifting through grey, colourless days in a post-traumatic haze. Given the state of his ennui, it's going to take something spectacular to bring him out of this funk, and that something might just be Kaori Miyazono. Indeed, Kaori is everything that Kousei isn't - care-free, outspoken, spontaneous, and with a devil may care attitude to music; rather than immaculately recreate classical pieces with her violin, she instead tears them apart and reversions them in her own spritely image. Oh, she also happens to be a beautiful blonde girl, which always helps when it comes to attracting attention.

Although Kousei and Kaori's first meeting couldn't be more unfortunate, fate somehow forces them to spend time together, with Arima tagging along due to Kaori's friendship with his own childhood friend Tsubaki, and her interest in his best buddy Watari. Given that their first outing as a group is a violin recital in which Kaori is taking part, Kousei quickly gets to see this musical force of nature at first hand - needless to say her attitude and ability blow him away, although it's going to take far more than that to truly rekindle his love of music and help him overcome the hurdles between him and a return to the piano.

You can probably guess how things work out from here - Kaori becomes increasingly insistent that Kousei can't simply give up on his God-given talent, forcing him to confront his demons no matter what while also revealing a surprising vulnerable side of her own. If all of this leaves Kousei smitten with his energetic and passionate new friend, it also brings feelings that Tsubaki has been struggling with about her childhood friend to the surface - there's no shortage of heartache ahead for all concerned, that's for sure.

The first thing to say about Your Lie in April is that it's absolutely beautiful - here is a series that could probably have gotten away with some simple but effective animation, but instead goes the whole hog to provide one of the most attractive anime series you're likely to see. From its colour palette down to its direction, the show is utterly superb - not always consistently so, but it's often subtle moments and flourishes that will make your jaw drop are so frequent than they more than make up for its occasional sloppy moments. This all comes to the peak with the show's final episode, which eventually ditches much of its dialogue and instead relies purely on visuals and music to convey the build up to an awe-inspiring and hugely emotional denouement to the series.

Equally impressive is the show's ability to blend these aesthetic wonders with some well-placed comedy, often portrayed in a cartoon-like or super-deformed fashion that would feel jarring in some series but somehow proves to be a perfect bedfellow for the drama on show, lightening up dark moments or simply entertaining in its own right as the mood takes it. Indeed, come the end of it all you'll still have plenty of fond memories of belly laughs and silly moments to sit alongside its big, emotional moments.

In fact, every aspect of Your Lie in April's narrative is decidedly strong - the early running of the show is a lot of fun, its escalating romantic drama works excellently for the most part, and although it meanders a little here and there the overall story works wonderfully. The only caveat is that you need to buy into some of the core aspects of its premise - Kousei's psychological issues surrounding his mother's death can feel a little unbelievable (even though it's sold very well by the show's visual treatment), and similarly Kaori's circumstances and demeanour could both be seen as a little unbelievable, particularly if you aren't used to them as a typical trapping of this kind of story.

Completing this triumvirate of expert presentation and story is, of course, the show's music - its original soundtrack is simple but incredibly effective, largely using a single motif and adjusting its tone and speed depending upon the circumstances, but the series also has a wonderful selection of classic pieces which have been smartly selected to fit perfectly as an illustration of the emotions the main characters are going through at the time. These pieces are mostly used as set pieces during various concert scenes, where a legitimate complaint to be made is that the cast ruin said pieces by talking all over them via inner monologues - a necessity in most cases, but a decision that should have seen any dialogue reduced to a bare minimum to let the music do the talking a little more.

There's so much more that we'd love to talk about regarding this series, but to do so would be to spoil too many of his best moments for those yet to watch the series. No, it isn't perfect, and its minor mis-steps and irritations do tend to chip away at the sheen of near-perfection that the early episodes of the show exhibit, but it's still a touching story given a stunning animated representation that will dazzle you - it really needs a high quality western Blu-ray release, that's for sure.

Even with some of its more outlandish narrative strokes, there's something incredibly grounded and easy to relate to about Your Lie in April - it has love stories that may cut you to the quick, and there's a truly organic feel to much of its comedy and drama that again is accentuated by that precise, impeccable visual presentation. Anime has no shortage of romance-led series, and while many of them fall flat Your Lie in April rises above them to strike out with a compelling story and great sense of humour that guarantees you'll feel something come the end of every episode. In that sense, it's very much like the music which resides at the heart of the series - no matter how hard you try, it'll work its way into your mind and thought processes, and touch you in a way that you'll never quite forget.

You can currently watch Your Lie in April in streaming form on Crunchyroll.

8
A visually beautiful series packed to the rafters with heart to ensure that it's funny and touching in equal measure.
COMMENT AND DISCUSS
blog comments powered by Disqus