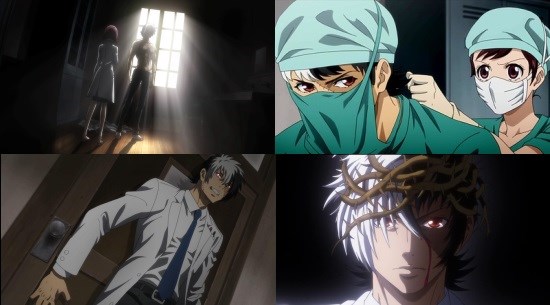 Osamu Tezuka’s Black Jack is one of the master’s best-known creations – a gifted, mercenary surgeon with a look that still informs the design of many characters today. Most of the anime adaptations of Black Jack have never really made it to the West (and only a single OVA has ever been released in the UK), and even today it’s not an adaptation of Tezuka’s works but rather the prequel spin-off by Ninja Slayer’s Yoshiaki Tabata that’s coming over via Crunchyroll. But can Young Black Jack really hold a candle to the man its lead is set to become?

It’s the 1960s in Japan and Hazama, the man who will one day wear the mantle of Black Jack, is a young medical student. More seriously-minded than his peers and combining incredible skill with a willingness to take big risks, he stands out from the crowd though he often finds his work unappreciated by those around him. Taking on everything from reattaching a child’s severed limbs to dealing with the fallout from the war in Vietnam, Hazama must walk the path that will lead him to becoming the world’s greatest surgeon whether he wills it or not.

So here’s the thing about surgery. Surgery is intense, skill-based, complicated and delicate as its practitioners make an astounding series of decisions that will decide if their patient lives or dies. However, surgeries tend to take hours to complete and to a bystander are a combination of boring and disgusting for the most part. This is why every medical drama you’ve seen tends to focus on the character-based drama that occurs around the surgery itself, spinning webs of comedy, romance and gripping through lines (maybe not so much the last one). Even the lowest dregs of such series like Casualty understand this, but Young Black Jack seems to have forgotten these lessons. Instead we get almost the exact opposite, with the bare minimum of character development and plot so that we can get to scenes of Hazama having internal monologues with himself about how the operation will go and sequences of the surgery being performed which sadly aren’t remotely interesting as they mostly take place at a distance, so there’s rarely much of an indication about what’s happening apart from what Hazama or other present characters tell you is happening.

This, it would seem, is the only function Young Black Jack has for its characters who, when they aren’t telling you what Hazama’s doing (as opposed to the series actually animating it), they’re explaining just how amazing he is. Five episodes in and there are barely any recurring characters other than Hazama himself and those that are there have essentially no part to play. It’s wholly understandable why they would want Hazama to be the star here, but even the man himself is pretty lacklustre and is more a way to dump out large chunks of exposition rather than be a character that the audience can have any kind of attachment to.

Visually it must be said the series looks pretty great. Whilst Tezuka purists may bemoan the fact that the character design almost totally jettisons the classic look of a Tezuka work, Tezuka Productions have done a great job here (their first since 2012’s Kids on the Slope) particularly in terms of capturing the look of the period. The only flaw comes in the aforementioned surgery sequences which are dull as can be and you can’t help but wish that director Mitsuko Kase (of Saikano fame) had been able to inject some style and energy into these sequences to bring them to life.

Where the series really shines is musically though. The sound design throughout is really good and there are two brilliant songs bookending the series. ‘All Categorise’ by Takuto is a great number punctuated by the clever visuals of showing each of the series characters next to a version of themselves drawn in Tezuka’s style and ‘I am feeling alive’ by UMI☆KUUN is a really phenomenal opening theme that you could listen to for ages.

Despite the great soundtrack we must however ultimately conclude that Young Black Jack just doesn’t really deliver. It’s as bland as anything and frankly you’ll likely not remember anything about it even five minutes after having watched it. Like all surgeons after a failed operation perhaps Hazama should sorrowfully shake his head and just walk away whilst the music plays.

4
The operation has failed.