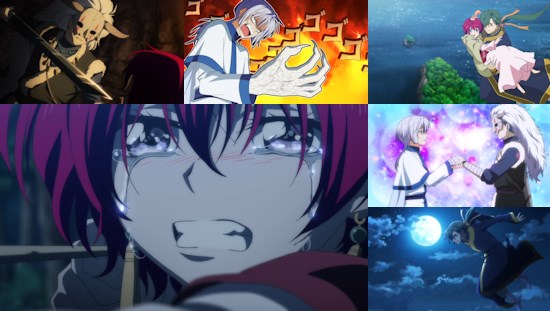 Her father murdered. Her own life in danger, thus sending her on the run. A seventh month wait between Blu-ray volumes. Poor Yona is having a tough time of things, so hopefully the later than expected arrival of this second half of her story can finally bestow some good fortune upon her.

Still, in spite of all of the obvious hardships that this young princess has had to face up to, the end of Yona of the Dawn's first half at least saw her making progress - as well as some distinct personal growth in terms of her handling of the problems at hand, she's also now well on the way to assembling the four Dragon Warriors destined to come under her influence should she be able to find them. With two of those four humans with impressive powers already at her beck and call, it shouldn't take long to find and persuading the remaining warriors so that the adventure can really start, right?

Wrong. Instead, it takes basically the rest of the series for Princess Yona to finish assembling her dream team (or should that be dreamy team?), before being distracted by a finale involving human trafficking that leaves exactly no time for her to embark upon her true quest to avenge her father and win back the kingdom which is now rightfully hers. To call this disappointing is an understatement - there was no need for this series to take a full 24 episodes to set up its scenario and "get to the good bit", as there's little of sufficient value to justify the glacial pacing of the show. This decision is thrown into particularly sharp relief when compared to the recent anime adaptation of The Heroic Legend of Arslan, which uses a very similar theme but puts together its crew and embarks upon its... well, its heroic legend, in short order.

I'm sure there's a version of all of this careful build-up that might be rewarding in its own right, but Yona of the Dawn never seems to know what to do when it stumbles upon something interesting. At one point, Yona is faced by the possibility that the kind, passive rule of her father might have actually done more harm than good to many of his subjects - a fascinating ideal that should have been explored fully, but it's instead used as little more than a footnote before we get back to trudging around hunting the next Dragon Warrior. Similarly, what seems like a seismic (albeit criminally hurried) chance meeting between Yona and the man responsible for her father's demise brings one of the show's emotional highlights, but not 10 minutes later it's forgotten about as if it never happened.

These stumbles could be easily forgiven in a series filled to the brim with fascinating characters and stories, but instead they're rare rough gems in an oasis of moribund story-telling. There's a rich world here for Yona to explore, but we never get to see enough of it to be amazed by or interested in it, as we're constantly spending all of our time watching over the far-less interesting primary cast and constantly cutting jarringly away to moments of comedy that invade the series feeling as if they've landed from another show entirely. Oh, and there's a random fighting tournament episode in the middle of all of this, as if that's somehow an exciting and innovative way of shaking things up.

While it's easy to rail against the pacing of this second half of Yona of the Dawn, the more I think about it the more that feels like pointing the finger at the wrong suspect. Yes, everything the series does plays out at a glacial pace (with apologies to any glaciers reading), but what's more important is that the vast majority of those events don't feel like they matter. The first half of the show at least showed marked progress in Yona's character as she learns to think on her feet in difficult circumstances, but there isn't much further left for her to go in these episodes and those around her don't have anything unique to bring to the table either. In essence, an already unremarkable series becomes boring.

On a more positive note, the animation quality of Yona of the Dawn remains colourful and pleasant - it's vibrant to look at, character designs are equally pleasing, and although its action scenes are unremarkable it makes strong use of its assets to ensure that pivotal moments stand out nicely. The show also boasts a decent enough dub that we can't particularly fault, and subtitle quality is also pretty strong so we have no qualms with the show's presentational package.

Having heard quite a lot of praise for Yona of the Dawn prior to watching this series for myself, I have to confess that I've been left scratching my head at exactly what all the fuss is about. The core premise of the idea isn't all that original - and, as noted previously, The Heroic Legend of Arslan does it a whole lot better - and the execution can boast only very rare highlights from a series that is for the most part dry and dull when it isn't leaping into moments of jarring comedy. As a result, I find it hard to recommend this series when there are better alternatives available - Yona of the Dawn proved to be Donor of the Yawn in my case.

4
This second half of Yona of the Dawn is less a desperate race to restore a kingdom, and more a sedate and meandering stroll through it.
LATEST REVIEWS
Girls' Last Tour