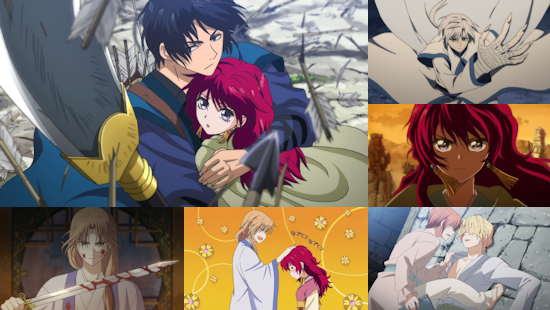 Being a princess for an important kingdom can be a tough gig but not, it seems, for Yona - so sheltered is her life within the kingdom of Kohka that she's a precocious, demanding and entirely self-absorbed young girl who is more worried about how her hair looks than the future of the kingdom and its subjects. This is particularly surprising given the situation Kohka finds itself in - its kindly king is seen as weak by many, in turn causing the threat of war or some kind of uprising to be cast over it, and with the queen having passed away there are no male heirs to which the kingdom can be bequeathed.

All of these problems are about to come to a head in the most violent way possible for Yona however, as the young man which she loves reveals himself to be the agent of her father's demise so that he might become the new ruler of the kingdom himself. Having witnessed this atrocity with her own eyes it seems that Yona is about to be sent to join her father in the afterlife, although a mixture of blind luck and the skills of childhood friend and high-ranking general Hak combines to save her from her fate. With Hak and Yona now on the run and pursuers looking to capture or kill the princess to ensure Su-won's plan comes to pass, how on earth can this precocious girl hope to survive?

Therein, of course, resides one of the key hooks for Yona of the Dawn - watching this entirely self-absorbed young girl come to terms with the harsh new realities of her life and learn how to thrive in spite of them. Certainly, this element of the series is by far its most satisfying - Yona arguably shifts a little too quickly from helpless girl to hard-nosed, weapon-wielding woman at times, but for the most part seeing her grow up and grow into the new role required of her is interesting and satisfying in equal measure.

By the time we reach the half-way point of the series, we find some notable fantasy elements added to the equation too, with Kohka's ancient mythology transitioning from fiction into fact and leading Yona and Hak in a search for those who might turn the tide and see the kingdom returned to its rightful ownership. It's here that the series falters entirely - the individuals Yona is looking to recruit have already been shown off in both the opening to the series and a later flash-forward, which strips any real tension from the hunt for them, and the actual process of finding and persuading these individuals to join Yona's party is frankly rather dull. For a series that had some moments of real tension and energy in its early episodes as we watched Yona on the run, for the show to turn into a rote and plodding journey to assemble the rest of the cast feels all the more disappointing. The only hope here is that events can take a more exciting turn again once this element of the story is completed in part two of the show.

For all of the serious events being bandied around here, Yona of the Dawn also looks to present plenty of comedy within the structure of its narrative, with plenty of cuts to superdeformed versions of characters to punctuate such moments. The results of this are frankly a mixed bag - there are some good laughs here, but sometimes these cutaways for comic asides interrupt the pacing of a scene or distract from more important events in a frustrating fashion. It's a surprising moment of weak judgement from a show that is otherwise well-directed - some of its action scenes in particular are excellently realised, and the series otherwise hits the nail on the head tonally beyond those distractions.

Speaking of those action scenes, these serve as a reminder that the show's animation quality is something of a mixed bag itself. Overall, the visuals on show here are pretty decent, but it's clearly a series working within some strict limits and as a result it puts its best foot forward in some pivotal scenes while others look mediocre at best. Yona of the Dawn has appealing character designs and backgrounds that help make up any shortfall, but taken as a whole it's a solid if unspectacular affair with a handful of standout moments sprinkled throughout.

As the first UK release to fall officially and directly under the Funimation Entertainment label, you'll be pleased to hear that everything is as it should be here - video and subtitle quality are both good and we didn't come across any major issues to speak of. The show's English dub is also pretty solid across the board, with fitting performances that are largely just as good as those you'll find from the original Japanese voice cast. In short then, everything is present and correct here.

Although our overall thoughts on this first volume of Yona of the Dawn are tempered rather by the dull latter episodes on this set, it should be said that there's a fair amount of potential in the series as a whole - Yona's journey is certainly an interesting one in both physical and character-building terms, and there's a sufficiently strong cast around her to make that journey compelling. Thus, our feelings about the show at this point are very much a case of "wait and see" - this volume tails off markedly after a pretty strong start, but a good second half to its narrative could make this series far more worthy of your time as a whole. For now though, what we have here is a decent little story marred by some misplaced comedy and a long, dull ramp-up while it assembles the remainder of its cast.

English 5.1 and Japanese stereo audio with English subtitles. Extras consist of US cast commentary tracks for episodes 4 and 8, promotional videos and TV spots, trailers, and textless opening and ending credits.

6
A decent premise and some good character work gets undone by some misplaced comedy and a dull journey to assemble its wider cast.
COMMENT AND DISCUSS
blog comments powered by Disqus