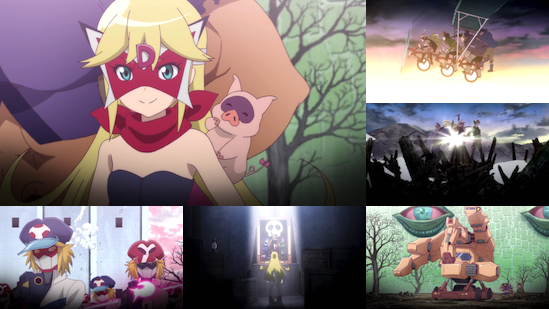 For over fifty years Tatsunoko have created some of the biggest names in classic anime, so it’s no surprise that the legendary studio is still reworking them to be loved by a modern audience all over again. Firstly, Neo-Human Casshern received a live-action movie in 2004, followed by the rather brilliant apocalyptic remake Casshern Sins in 2008. Then in 2013 Science Team Gatchaman received a continuation of sorts with Gatchaman Crowds, along with a proper live-action remake that same year. 2015 marks the 40th anniversary of Tatsunoko’s popular “Time Bokan” franchise, so what better way to celebrate than with a new series inspired by it’s second (and arguably most successful instalment) - Yatterman. Even though it already received the live-action treatment and an anime remake in 2008/9, this time Yatterman Night is set to turn heads the same way both Casshern Sins and Gatchaman Crowds did.

Acting as a sequel of sorts to the original series, Yatterman Night takes place long after the Doronbow Gang have been defeated by the original Yatterman #1 and #2. As punishment for their crimes, the Doronbow were sent to live in poverty while everyone else thrived in the Yatter Kingdom. Generations pass, and the story begins with Leopard - a nine-year-old girl who is the direct descendant of Lady Doronjo herself. When Leopard’s mother falls ill, she travels to the Yatter Kingdom with her mother’s friends/servants Voltkatze and Elephantus (descendants of Lady Doronjo’s henchmen Boyacky and Tonzra respectively) in search of help. However, the guardians of the Yatter Kingdom don’t take kindly to their arrival, with the trio leaving empty-handed and unable to save Leopard’s mother.

Realising that the Yatterman can’t be the heroes they’re cracked up to be if they won’t help a sick woman, Leopard vows to give them “a good forehead flicking” and takes up the mantle of Lady Doronjo herself. Along with her new henchmen, the Doronbow Gang is reborn and ready to make the world an unsafe place for the Yatterman!

For those unfamiliar with the original Yatterman, it was a comedy superhero series that saw the titular heroes fight against the Doronbow Gang as they searched for the skull stone - which would lead them to the largest gold deposit in the world. So, think of the Doronbow less as these ultimate super villains but more as akin to the original Team Rocket - complete with a ridiculous mecha contraption of the week. As you’d expect from an anniversary series Yatterman Night pays homage to style and tone of its predecessor - but that isn’t before tugging at the heartstrings with a pretty hard-hitting first episode. Despite having only spent around twenty minutes with them, the death of Leopard’s mother feels like the loss of a main character. It does what any first episode should do and really gives you the motivation to keep watching, even though you know the rest of the series may have already achieved its emotional height.

From there on the show begins to gradually move more toward the humorous side of things, but the events of this first episode are never forgotten or lost. Even when the new Doronbow Gang are sitting in whatever mecha they’ve managed to concoct out of everyday objects this week, Leopard's strong sense of justice is still ever present to remind the audience of her bereavement. It’s quite bizarre to see a series manage to juggle such a series opener with a very retro sense of humour, but somehow Yatterman Night is able to manage it. That isn’t to say every joke is a triumph - the second episode particularly has some questionable “belly button” moments that would probably have been funnier back in 1977, but there is some undeniable charm to this bumbling trio and their over the top “HA HA HA”s.

One of the biggest problems of films/series that twist the villains into a protagonist's role face is that in order to work they often have to make some controversial change to a key element of said character - usually making it turn out that they were more misunderstood than anything else. So far Yatterman Night has been able to bypass this by being largely open to interpretation. Leopard herself is beginning to wonder whether Doronbow were truly the bad guys, but so far there’s been nothing to tarnish the legacy of the original characters. Newcomers to the show are getting a highly enjoyable series that’s flipped the hero/villain dynamic on its head, while existing Yatterman fans are left speculating how the former heroes could have become so corrupt over the generations.

Yatterman Night has a lot in common with last year’s World Conquest Zvezda Plot, which also featured a prepubescent “supervillain” with a rather questionable wardrobe choice. But even with its retro-stylings Yatterman Night feels considerably more reigned-in than Zvezda’s utter absurdity, scaling back the grandiosity of world domination to instead give us a smaller and more believable cast. In a mere three episodes, Leopard’s backstory is already considerably more cohesive and understandable than Lady Zvezda’s could ever hope to be.

Being the long-standing studio Tatsunoko are, it’s no surprise to see the animation is of top quality. It retains the 1970s Saturday morning cartoon charm of the original Yatterman, while at the same time bringing it up to the standards one should expect from a series in 2015. Meanwhile the main character designs are good, if not always feeling completely original (blonde haired lolis are hardly in short supply). The swarms of Yatterman robots however are chillingly awesome, and even when they’re dive bombing out of a giant mecha stalk or battling a giant forehead-flicking hand still manage to stay imposing. It may be too early to call that latter effort the best mech design of the year, but at the very least its evidence that this series isn’t short of imagination.

You can currently watch Yatterman Night in streaming form on Viewster.

9
True to its origins while somehow holding a perfect balance between humorous and heartfelt, this could very well be the sleeper hit of the season.
COMMENT AND DISCUSS
blog comments powered by Disqus