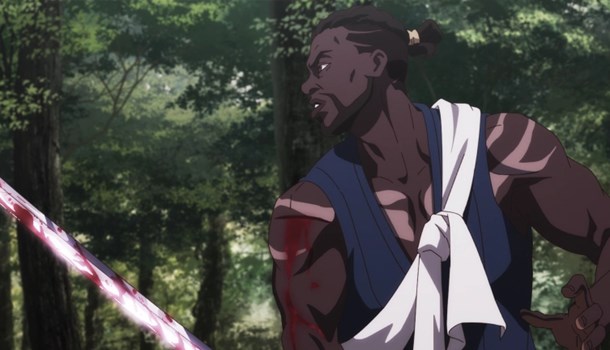 From the trailer and the promotional material Yasuke promised a historical drama following the story of the an African Samurai who was a retainer under Nobunaga Oda. I was expecting the story to follow him from his arrival in Japan as a slave to gaining Nobunaga's trust and respect; working his way up the ranks to become an honourable Samurai during one of Japan's most historically significant times. Instead Yasuke as a character is a means to tell a different story. Loosely based on historical facts Yasuke features demon armies, magic and mecha to create a completely original story.

Instead of completely focusing on the story of Yasuke working under Nobunaga, we see this as a framing device used as flashbacks to times in Yasuke's life that tie in to the current story. In the "present" Yasuke, no longer a samurai and now a Boatman, spends his days drinking in his local village pub and fishing in order to get by. At the same time, one of the children of the village notices how strong Yasuke is and tries to become his apprentice in the ways of the sword - a request Yasuke rebuffs constantly. Things take a rather sudden turn when another village child, a young girl named Saki who is ill, discovers she has psychic powers. Yasuke is tasked with escorting her to see a doctor in a neighbouring village while avoiding a group that has ties to the current rulership of the country.

The story of Yasuke is a rather flimsy one, and certainly not what I was expecting. Rather than seeing the Sengoku period on full display, we cut instead to the period after which everything is resolved. We do see the occasional flashback here and there but things are used in order to give context to Yasuke's current actions and mindset rather than a detailed history of events. These scenes include those that show Yasuke's moral code and that he still values honour and the way of the samurai. These moments are brief and, honestly, more interesting than the story we're actually given.

The plot is very formulaic; two characters get thrown together and have a common goal or destination to get to. It's a road trip movie affair, like the Sonic movie, with the actual plot being shown when they arrive at their destination. However, unlike the typical style of such movies, there's barely any interaction between Yasuke and the young girl he is protecting. There is no developing friendship between them or any development of trust. Things move too quickly with Yasuke and his charge getting to their destination and participating in battles. Things move at a rather breakneck and frankly rushed pace, which isn't unexpected when the anime is only six episodes long. I expected this to be the introduction arc with the group getting to their destination just as things end, but sadly not. By the end, all plot threads are resolved, and instead of a lead in, we're done in 6 episodes - I would have preferred if the show did a bit more to develop Yasuke and Saki's friendship, their characters and the world around them.

This is another flaw. The world feels rather empty and the main conflict and source of oppression feels like it comes out of nowhere. We learn that since Nobunaga's defeat, the new Daimyo in charge has made things hellish for the people of Japan; yet we never hear of this until near to the end of the series. Here we find out that the Daimyo wants Saki's power so she can live longer (turns out she's a demon!). It's a bit odd that things were idyllic and quiet in Yasuke's town. He lived his life for 20 years undisturbed and suddenly things in the country are awful because he decides to take a girl with psychic powers to another town. It feels rather forced. We also see Demons and characters that have special abilities appear, while Yasuke, strong and very skilled as he is, is just a regular man. He does have a lot of endurance and determination but it's odd seeing him fight against a woman who can turn into a bear, a robot and later on a demon army with their own demon mecha. This aspect of the show is briefly teased in the intro scene of the show with magic arrows being cast against a demon army. But in Yasuke's flashbacks to his days as a samurai we never see the demons.

Things get incredibly bloody near the end, with a lot of character death played more for shock value than meaningful loss. The deaths feel very "TV drama" in tone, in that typical "death flag" way of finding out more about a character just for them to get killed off immediately so that the audience has some kind of emotional response. Tied into this we also see in the flashbacks the attempts at showing racism towards Yasuke without outright stating it. We see a few characters that do not respect or acknowledge Yasuke, making complaints about how Nobunaga trusts Yasuke so much. There are very brief moments of this that I feel the show should have focused more on. Yasuke is a very uncommon case in anime, as not many feature an African man as the main character of a Japanese show (Afro Samurai is th emost obvious comparison). The show should have focused more on showing Yasuke's strength and success in spite of the disdain of his peers. There are a few moments when Yasuke is put into odds that are wholly against him and comes out on top, but for the most part we see Yasuke not really being phased by things and moving on. It feels like a missed opportunity to champion a black character as the star of an anime. Instead I feel like Yasuke at times plays second fiddle to the young girl he is to protect. It seems that our hero is tossed around by events rather than taking control and solving them.

With all that being said, there are a few interesting things about the show. It has a lot of style, the animation is also solid and consistent. There are great fight scenes that involve some very creative character designs and Yasuke himself is a cool character when the show knows how to properly convey it.

If only the series had spent more time developing the main character, he could have been iconic, but as it is this is a short and shallow watch. At only six episodes the series has an extended movie feel to it, with each episode blending seamlessly into the next. Its brevity is both a blessing and curse.

All in  this is a watchable show, but it could have offered far more.

6
Cool, Stylish but short and rushed. A shallow experience.