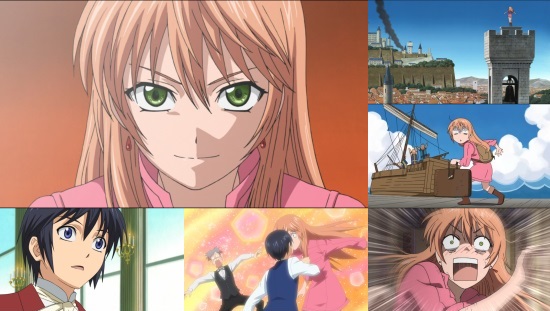 Nike, the fourth and youngest princess hailing from the Rain Dukedom makes her way to the capital of the Sun Kingdom in order to marry its king. In exchange for marriage her homeland will be granted autonomy. Nike finds herself in this situation thanks to the method that is used to settle most major decisions in anime: Rock, Paper, Scissors. After losing the game, Nike is designated as the princess who will marry King Livius, rumoured to be a monstrous king due to his conquest of the entire world within three years of his enthronement. Upon arriving in the Castle of the Sun King, Nike is shocked when she sees that rumoured monster king is still a boy who is younger than herself. Nike, being a princess of the Rain Dukedom, has the power to create rain, which is the main reason Livius wished to take a princess from the Rain Dukedom as his bride. Upon learning this, Nike states that creating rain is a sacred ritual and to do it properly needs to learn more about both the area she wishes to create it in and the hearts of those who wish to see it.

The World is Still Beautiful begins immediately by establishing Nike as a headstrong and earnest female lead character. While in an undesirable situation she decides to go ahead with it and gives it her full dedication, and her earnestness shows when she decides to forgo the luxurious route of travelling to the palace by sending her entourage home and taking the scenic route from the port town of the Sun Kingdom to its capital alone. By doing so she hopes to grasp the lay of the land and get to know the people of the country she'll be queen of. Unfortunately, things don't get off to the best of starts when she is not only the victim of theft but collapses due to hunger and fatigue. Here Nike meets a generous family who ffind her and nurse her back to health. After another run in with the thieves, Nike manages to find a way to get safely from to the capital, but things don't go so smoothly here either when her behaviour gets her into a scrape with the palace guard. After being brought before the king and her future husband, both are shocked to discover the other is not what they had in mind. The king expected a better looking and more refined princess, and Nike expected someone older. However, Livi does find Nike amusing enough to keep her around the Palace, and Nike sees sadness and the burden of being king in Livi's eyes.

From here the series mixes comedy and drama into it's romantic proceedings, most of which stem from the arguments both Nike and Livi have that revolve around creating rain, the responsibilities of the monarch and the clashes in their personalities, during which we do see some gradual development between the two - Livi starts to open up more to Nike and Nike shows genuine concern for Livi. While plot is a little thin at the moment there are some hints at a deeper story revolving around disloyalty amongst the nobility in the kingdom, which may possibly stem from Livi's lineage and childhood, exemplified by some briefly seen conversations in the first episode and assassination attempts in the following instalment. While the aim of the series so far seems to be pointing towards getting Livi and Nike to have mutual feelings for each other, the plot feels like it may come to the fore in later episodes. For the time being though, the series has focused on establishing Nike and Livi's characters as well as the initial dynamic in their relationship. Luckily Nike is a strong and very likeable female lead who is able to carry the show and make up for the plot's shortcomings. Livi, while showing signs of development, just needs a bit more time and focus in order to stand on equal footing with Nike. Fortunately it seems like this won't be an issue as there seems to be plenty of opportunity to get the two characters together for some more back and forth banter.

So far the show has been rather entertaining - with a strong female lead and fun to watch dynamic between Nike and Livi, it has a lot of promise and potential. In order to fulfil this it needs to properly convey its plot and also develop Livi in the right way. From the outset it looks like there shouldn't be too much to worry about in this regard but only time can tell.

You can currently watch The World is Still Beautiful in streaming form on Crunchyroll.

8
A fun romance series carried by a strong female lead that offers a lot of promise.
COMMENT AND DISCUSS
blog comments powered by Disqus