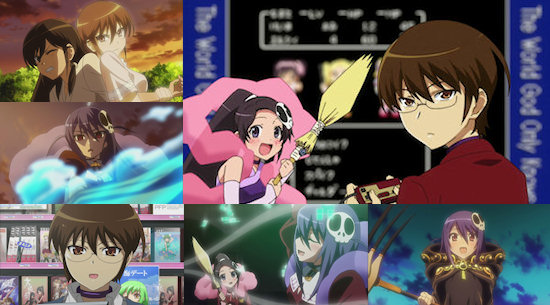 While some anime series have to endure a constant "will it/won't it" debate regarding the commissioning of additional seasons, The World God Only Knows managed to endure a relatively painless process where a second series was confirmed before the first had barely started.  Admittedly this wasn't a huge surprise given the popularity of both the manga from which it is derived and early enthusiasm for the anime itself, but it still allowed us to view the series without concern for a vague, unsatisfying ending to the show.

Thus, as season two of The World God Only Knows begins, it kicks things off with a recap which amounts to a shrug and a fourth wall breaking comment effectively informing you that "you really should have been watching the first series anyway".  From here it's very much a case of normal service being resumed, as an encounter with a pair of bullies leading to Keima meeting the next target in his quest to capture so-called "Loose Souls".  As per series one, this also means getting to know a character that exists entirely within the rather tired world of female anime character conventions - an outwardly tough as nails girl known as Kusunoki Kasuga who is trying desperately to hide her love of cute, girly things.  Needless to say, it's up to Keima to resolve this conflict, steal a kiss from Kasuga and fill the emptiness in her heart that has been claimed by a Loose Soul.  It's a fun and enjoyable enough story arc, but nothing that stands out from the crowd if we're honest.

Thankfully, the series does mix things up a little more for next pair of story arcs.  The first of these introduces another Demon to the show's roster in the form of Haqua, a former classmate of Elsie with a glowing reputation but a slightly less stellar reality to her soul capturing exploits in the real world thus far.  This particular scenario freshens up the series and its story on two fronts - firstly, by pushing Keima into the background somewhat, which in turn allows Elsie to take the spotlight to a greater degree.  Elsie and Haqua's interactions also serve to give us more insight into the show's world and core concept, allowing us to learn a little more about Demons and the tools at their disposal, Loose Souls and so on - a fleshing out of the story that goes at least a little way to adding some more depth to proceedings.

This is followed by another tale which looks to shake things up a bit, by introducing a girl named Chihiro who breaks all of the rules in Keima's dating sim-derived book by being utterly, utterly ordinary.  Again, the premise of the series is turned on its head somewhat by the twists and trials suffered by both protagonist and potential conquest here, making for a more fascinating chunk of viewing which doesn't quite pay-off in the end, but again at least suggests that this is a series that is willing to try harder than simply offering bland slice after bland slice of romantic comedy.

As per the first series, The World God Only Knows stands out as a polished offering above all else - its slickly animated with attractive and colourful character designs throughout, all well-voiced and backed up by a soundtrack that goes from the effective to the downright delicious as it offers up another full-blown oratorio for its opening theme.

All of this combines to create a series that perhaps leans a little too heavily on tried and trusted character archetypes at its core, but manages to be entertaining despite of that (or perhaps even because of it - this is a show that knows what the fans enjoy) to the point where you can forgive it some occasionally glaring flaws.  The World God Only Knows doesn't have the emotional depth (or depth of character) that it might occasionally think that it does, but that doesn't mean it isn't fun to watch and as a piece of undemanding entertainment that shifts knowing glances in the general direction of otaku on a regular basis it actually works pretty well.

7
It's more of the same for fans of the first season, although these episodes have seen fit to freshen things up to good effect.
COMMENT AND DISCUSS
blog comments powered by Disqus