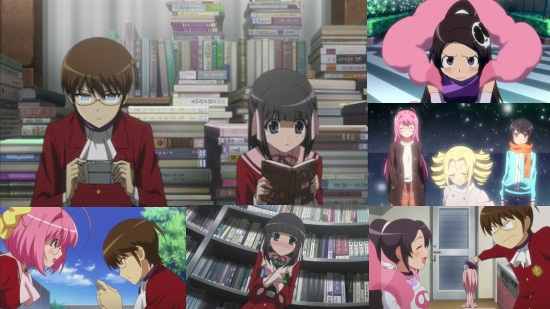 Although it holds a place as the most-watched autumn season series streaming on Crunchyroll, an impressive feat in the midst of some stiff competition, we weren't exactly blown away by the opening episodes of The World God Only Knows as it went about its business in a way that was solid if unspectacular.

We rejoin the series just in time for it to partake in a filler instalment - an occurrence that usually has the viewer break out in a cold sweat in anticipation of a pointlessly mediocre excursion.  However, on this occasion The World God Only Knows pleasantly surprised us via an expertly crafted episode which riffs on the idea of buggy and crash-prone visual novels which is hilarious to anybody who has ever had to suffer the irritations of a bug-ridden video game.

After that brief distraction we return to Keima Katsuragi's conquests, via what seems to be his toughest challenge yet in Kanon Nakagawa, a schoolgirl turned idol with a complex about being ignored by anybody.  Keima approaches this particular problem in his usual brusque manner, somehow winning Kanon over as this arc reaches its climax with an episode that showcases what this series can do when it gets into gear in the form of an expertly directed and atmospheric episode that feels almost cinematic in its treatment of the subject matter at hand.

Unfortunately, that solitary episode proves to be the sole highlight of this show's story-telling exploits, as its final arc returns to mediocrity via Keima bemoaning how boring and clichéd the typical "book worm" girls in visual novels are... before introducing us to a book worm of a girl who Keima is left to free from the Loose Soul that resides within her.  Again, there are occasional nice touches and expertly crafted scenes, but not enough to really make either the story or its characters stand out.

If all of this sounds like a rather unenthusiastic appraisal of this series as a whole, I'm afraid that's entirely the case - it isn't that The World God Only Knows does anything wrong in its premise or how it tells its stories, but sadly its presentation is so staid and unexciting that at no point do you ever feel roused into any state other than abject apathy.  This certainly isn't helped by Keima Katsuragi himself, who stays true to his real girl hating character but in turn becomes an extremely difficult individual to like; hardly what you want from a leading man who you should be rooting for.

This state of affairs is all the more disappointing when you consider those brief flashes of excellence which the series does enjoy - its sense of comedy in that aforementioned filler episode is bang on the mark, and the end of Kanon's story arc displays all of the emotion, drama and directorial verve that the show's admittedly ripe premise deserves.

Instead though, we're left with little more than mediocrity polished only by the occasional good gag or moment where the production team suddenly "get" what the series requires to function in its animated form.  The World God Only Knows could so easily have been a sharp, almost satirical prod at the world of the Japanese visual novel and dating sim - instead, it's simple an average twist on the very thing it looked to be trying to subvert.  With a second season already commissioned, let's hope it learns some of those lessons for its next outing in 2011.

You can currently watch The World God Only Knows in streaming form right here at UK Anime Network!

6
A few bright moments don't hide the fact that The World God Only Knows is a rather bland effort overall.
COMMENT AND DISCUSS
blog comments powered by Disqus