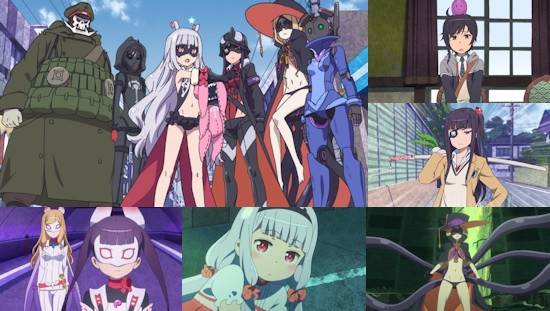 As Tears for Fears once stated, "everybody wants to rule the world". Everyone including young children it seems, as the mastermind of the world conquest plot in question in this new, original streaming series is nothing more than a little girl.

In fact, the opening scene of World Conquest Zvezda Plot's first episode makes it clear that this plot isn't just a twinkle in the eye of its originator - it's an ambition which has already been successfully realised. With this knowledge at hand, we back up to the true beginning of our tale, and a boy named Asuta Jimon. Finding himself homeless, Jimon is additionally caught with nowhere to go as his town's curfew kicks in thanks to the martial law in effect in the town. It seems that the cause of these draconian regulations is an entity known as Zvezda, regarded by dangerous terrorists by the powers that be.

All of this seems a million miles away from the hungry little girl on a tricycle that Jimon runs into as he searches for somewhere to go - a hunger which gives way to a rather precocious nature as she takes his only food and lectures him at length. This little kid seems to have ideas above her station - or does she? Surely this girl, Kate Hoshimiya, isn't actually the leader of an organisation hell-bent upon conquering the world?

With no food or home, Asuta is beyond caring about the whys and wherefores of Kate or her group of oddball friends - a dangerous mistake perhaps, as he finds himself becoming an unwilling henchman of Zvezda as they seek to conquer the world one step at time - steps including stopping people from smoking, amongst other things.

Although some wider aspects of its story are laid out in a basic fashion, these early episodes of World Conquest Zvezda Plot are pretty episodic in nature, seeing the group tackle some minor irritation of Kate's in the name of their ambitions to rule the world for reasons that are never defined in these episodes. Admittedly, there's some real charm to be found from Kate's worldview when coupled with the power to change that world, which effectively asks how a relatively young child would change the status quo if given the opportunity to do so free from the encumbrance of politics, social mores and so on.

Sadly, this charm and interesting point of view is wasted utterly in each and every one of these early episodes, with any good ideas ruined by incredibly disjointed narrative that either detracts from what's going on or ensuring that it makes absolutely no sense at all. It's clear that there's supposed to be a surreal vein running through the series, but rather than a source of the show's potential it's used merely as a crutch to prop up its flimsy story-telling - a crutch that might as well be made out of soggy newspaper, as it collapses under the weight of what is demanded of it every single time.

Any sense of a greater whole to the concepts within each episode is further undermined by the show's characters - at no point does the series delve in Jimon's motivations between his ill-explained homelessness, and likewise we know nothing of Kate's motives or the origins of her power (or her penchant for wearing uncomfortably revealing clothing in her Zvezda garb, for that matter). Some of the show's peripheral characters are built up a little better, but it still leaves the impression that these back stories are simply filled with nonsense once the writers run out of any better ideas for their existence or motivation.

The result of all of this is incredibly frustrating - every episode is screaming out for the space an opportunity to allow its good ideas to breath, but every time it looks as though it's about to finally join the dots and reveal its grand vision the entire thing is smothered to the point where the only one left screaming is the viewer out of sheer disappointment. Perhaps everything will come together in a coherent and enjoyable way further into the series, but given the quality of writing on show in these opening instalments we suspect that it simply doesn't have the talent to shift up a gear into something more than the case of wasted potential that World Conquest Zvezda Plot currently exhibits.

Still, it isn't all bad - the show's colourful, busy animation is as charming as the core of its premise and creates a world that would be pretty compelling if it had an over-arching story to back it up. The show also has some enjoyable opening and closing credits (and music to accompany them), and Misaki Kuno's voice acting turn as Kate is perfectly pitched.

The fact that we're touting the show's credit sequences as a positive tells you the real story here though - World Conquest Zvezda Plot is a massive, massive disappointment. If it were just a bad show we'd probably be able to shrug it off as a failure, but the fact that its potential is so clear to see and comes so close to breaking through on a couple of occasions that watching these episodes is an exercise in frustration. This series could have been something truly wonderful and its heart is in the right place, but incompetent execution means that it can't even conquer its own limitations, let alone the world.

4
A charming core premise is sunk without a trace beneath sloppy, disjointed writing.
COMMENT AND DISCUSS
blog comments powered by Disqus