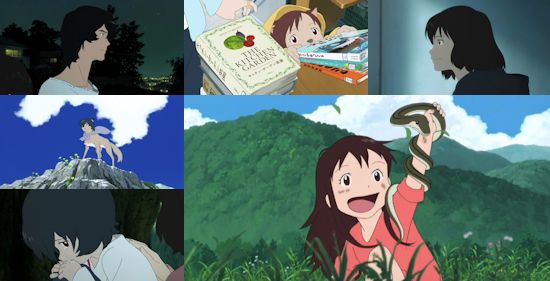 It's hard to mention the name of Mamoru Hosoda without following it with a torrent of gushing praise of his work - aside from directing arguably the best One Piece movie, his work on The Girl Who Leapt Through Time and Summer Wars speak for themselves.  Thus, it's with substantial excitement that we sat down to watch Hosoda's latest work as the closing film of Scotland Loves Anime 2012... and what a way to finish the festival with a bang.

While the film is narrated throughout by Yuki, one of the film's two titular wolf children, we begin by being introduced to Hana, a kindly and studious girl who makes the acquaintance of an intriguing loner studying at her college.  Upon learning that he isn't even registered to be studying there but is instead attending lessons on the quiet, she does everything that she can to help him with his studies.  Acquaintance turns into friendship turns into love, before ultimately Hana learns the secret behind this mysterious man's nature as a loner - he's actually part-wolf, part-human, and the last of his kind to boot.  This does nothing to faze Hana or quash her love for this man, and ultimately the couple have two children together, both of which inherit their father's part-wolf nature while also retaining all of the more usual human characteristics.

If you thought that bringing up human children was hard, it is as of nothing compared to bringing up a pair of wolf children, and this is made immeasurably more difficult when Hana's significant other passes away in what seems to be an accident.  Left to fend for herself and with no recourse to look to doctors, social workers or anyone else for help lest they learn the secret of her children, all Hana can rely on is her own instincts and a determination to do what is best for Yuki and Ame - a determination which ultimately leads her and her family out into the country to avoid the ever-growing attentions of society towards her growing children.

After struggling and ultimately coming out on top against the difficulties of life in the country thanks to a surprisingly friendly and resilient community around them, the next challenge that this young family has to face is the biggest one of all - growing up.  With many of the usual growing pains and hard lessons learned of childhood supplemented by the unique issues encountered by Ame and Yuki, is there any hope that these two individuals can ever grow up to be who, or what, they really want to be?

So goes the premise of Wolf Children, a film which is ostensibly a love letter to parenthood and the worries that any new parent will invariably go through.  Despite the added frisson of Ame and Yuki's true nature to effectively isolate the family from society, everything that we see our main characters go through will resonate with anybody and everybody - whether it's a parents dilemmas surrounding how best to raise their child while giving them the freedom they need or judging when to let go and allow your offspring to walk on their own two feet, or the childhood worries of being accepted and finding your place in the world, every aspect of human life and growing up is depicted in a stunningly sharp and intelligent fashion.

Perhaps the real genius of Wolf Children is how quickly it draws you into its world and ensures that you fall deeply in love with its characters - it's impossible not to be caught up in the breathless shock of Hana discovering the death of her significant other (helped along by an almost claustrophobic cascade of rain on the soundtrack which rises to  a deafening crescendo) and to cheer her on as she struggles valiantly to look after her two children alone, before later feeling the pain of Yuki in particular as she tries to integrate herself into a society which isn't entirely ready to accept her.  There are so many elements of this film that one could pick out and discuss ad infinitum, but rather than spoil them all I'll just be vague in saying that Wolf Children confidently and expertly unravels so many facets of the human condition that it's a marvel in its own right.

Beyond all of the film's thought-provoking pondering of nature versus nurture and the challenges of bringing up children or growing up yourself, Wolf Children is also incredibly entertaining - both Ame and Yuki are delights that light up the screen whenever they appear for most of the film, as their situation offers plenty of potential for light-hearted comedy that is realised fully and with maximum effect.  These moments also served to tighten the bond between characters and viewer, lending all the more power to its touching final scenes.

Having already mentioned one notable case of the film's audio track doing its part to accentuate the film, I should probably affirm that it does a grand job throughout, backed up by some equally strong performances from its voice cast.  Visually, the film doesn't try to do anything eye-popping, but instead settles for a consistently high quality of work sprinkled with some notably gorgeous sequences here and there.

At this point I'd normally bring up a few negative points just to prove that this isn't a work of absolute perfection, but to be honest I'm genuinely struggling to find any here.  You could perhaps argue that one aspect of the final act of the film is over-played and unnecessarily dramatic, and visually I could point out a few cases where some poor CG work was a little distracting, but this all small fry against the backdrop of a film that is, quite simply, incredible.

I almost don't feel qualified to suitably describe just how good a film Wolf Children is - its subject matter is universal (although I imagine parents might glean an extra layer of emotional connection to it), its characters instantly lovable and its outlook life-affirming - the film's closing message of "be yourself and do what you want to do" is hardly fresh or unique, but set against a movie that so perfectly depicts the hardships and challenges that lead to that conclusion it feels rather inspiring.

At the risk of sounding as if I'm over-egging this pudding, this is one of the best animated movies I've ever had the pleasure to watch, and there's a very good case to be stated for calling this Mamoru Hosoda's best work by some distance.  It seems a given that you'll be granted further opportunities to see Wolf Children in the future, be it in a cinema or via a physical release.  When that opportunity comes, I suggest you take it with both hands to experience one of the most life-affirming works you're likely to have seen in a long, long time.  Quite simply, Wolf Children is a masterpiece.

10
A beautiful, intelligent and inspirational film that captures and distils many facets of human nature and the wider world superbly. An almost perfect movie.
COMMENT AND DISCUSS
blog comments powered by Disqus