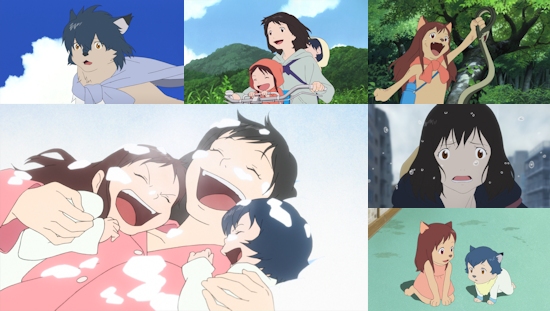 Trotting out the "new Miyazaki" label for a successful anime film director is a tired old plaudit to use, but in the case of Mamoru Hosoda it was very nearly true, having joined Studio Ghibli to work on Howl's Moving Castle before being cast aside as Hayao Miyazaki decided to take control of the production himself. Still, even without that aborted attempt on his resume, Hosoda has arguably cast aside any claims on being the next Miyazaki by proving his credentials as a director in his own right. From impressive work at Toei which first got him noticed as he added his own style and story-telling nous to the Digimon and One Piece franchises he really came to his own via his work on The Girl Who Leapt Through Time and Summer Wars, a pair of fantastic movies that captured the hearts of many both within Japan and beyond, leaving us waiting excitedly for a UK release of his latest film, Wolf Children. That film is now here on Blu-Ray, and we can categorically state that it was worth every second of that wait.

Then again, in our particular instance that wait has been mitigated somewhat by watching the film at Scotland Loves Anime 2012 (our review from that event can be found here), so perhaps the question in our specific case is whether we still love the film so unequivocally?

Wolf Children begins with a love story, pure and simple - university student Hana becomes fascinated by a man who appears in her classes, works diligently but alone, then disappears without even getting his attendance marked. It turns out that this man isn't a registered student at all, simply someone who wants to better himself any way that he can. With none of the materials required to make the most of his course, Hana offers to help - lending him books and sneaking him into the library, and before we know it the two of them spending most of their time together is a regular fixture. However, this is a man with a secret - that being that he isn't strictly a man at all, but rather a wolf-human hybrid. This revelation of such a massive secret would send most girls running for the hills (or at least I assume so, having never had to reveal myself as a wolf to a girlfriend) but not Hana - if anything, their relationship becomes closer than ever, ultimately leading to the birth of two children, Yuki and Ame.

In a sense (and not to detract from the beauty of this tale alone), this is where the story really starts - circumstances contrive to leave Hana alone to bring up two wolf children, with all of the difficulties that entails. This also serves as a wonderful story in its own right, as we see Ame and Yuki growing up via a series of vignettes that are often comical, and occasionally sobering in their handling of the realities of their situation.

Eventually, the prospect of bringing up these two unusual kids in the middle of a city simply becomes untenable, so it's off into the country we go for the family to live in an isolated, run-down cottage that actually provides Hana with the support she's never had before as she tries to provide a good life for her two children. As the years go by and given the mixture of wolf and human blood coursing through their veins, both Ame and Yuki find themselves facing a crossroads - whether to embrace human society, or return to nature as wolves. It's this path towards maturity, fraught with difficulty for both child and parent, which dominates the final act of the film through to its ultimately satisfying (albeit arguably slightly forced) conclusion.

Reading through those past few paragraphs makes you realise just how much Wolf Children attempts during its running time, taking in almost an entire lifetime's experiences over the course of a couple of hours and doing so incredibly well. Each phase of its narrative is satisfying (and emotional) in all of the right ways, and the film's mixture of comedy and drama is exquisitely balanced to create a story that says everything that it wants to while never feeling like it's trying to preach or wax philosophical - the complex emotions on show are presented in a way that is simple to comprehend, allowing Wolf Children to serve as an excellent piece of entertainment that is also worthy of any more considered thought you wish to throw at it.

If we had one concern about Wolf Children before seeing it for the first time, it's that its subject matter didn't grab us in the way Hosoda's previous films had in terms of concept alone. It's a real testament to this film, therefore, that it succeeds in being so engaging and something that you can instantly relate to - you don't have to be half-wolf to recognise the struggles Ame and Yuki go through to be accepted or find their place in the world, and even as someone who would rather set his own hair on fire than have children I could empathise with Hana's efforts to bring up her offspring as well as her reactions to the prospect that they were getting ready to grow up and carve out lives for themselves. Coupled with Wolf Children's musings on the concept of "nature versus nurture", the entire film is packed with what makes Hosoda's films so accessible - even in delivering the fantastic or unbelievable, its presentation is grounded in human nature, with characters and their reactions feeling so natural you're effortlessly drawn into events.

Having moved on from Madhouse to his own production team, Studio Chizu - a team admittedly made up largely of Madhouse staff - Wolf Children is expressive more than it is outright beautiful. While it can serve up some glorious scenes, the movie is more interested in depicting its characters realistically (or as realistically as you can when they keep turning into wolves), which adds to the films ability to immerse you in its setting without the need for much in the way of jaw-dropping visuals. The film's character designs also work towards the same goal, creating believable characters in both their human and wolf forms (and the hybrid in-between) as the plot requires of it.

Set against a fantastic Japanese language track that does a particularly good job of handling Ame and Yuki as young children, the English dub was always going to struggle in comparison. With that in mind, the English voice cast have done a great job of conveying everything required of them to ensure that the film is equally enjoyable no matter your language preference. The only area where the English dub doesn't live up to the original Japanese recording is in its depiction of Yuki and Ame's early years, where they don't succeed in matching the natural feel of the child actors originally used. Thankfully, this is a relatively minor complaint against a broadly strong dub, and if you are sticking with the Japanese audio then the film's subtitles are excellent and error-free.

If you're after bonus materials then this Manga Entertainment release is also strong, with plenty of event footage featuring the film's Japanese cast (and Hosoda himself) proving to be the highlight here, alongside the usual trailers and US cast commentary. Much as we'd love a commentary track from the director, this is a good selection of extras with some interesting thoughts to be found sprinkled throughout.

We'll broach no arguments about the quality of Wolf Children - it's a superb movie, and almost certainly the best film release that has passed through our doors this year; a film that both anime fans and the wider public really should watch at least once. Wolf Children is an absolute triumph - but is it Mamoru Hosoda's best? That's a harder argument to make given the quality of both The Girl Who Leapt Through Time and Summer Wars, but for our money Wolf Children feels like Hosoda's most "complete" work - a film that accomplishes everything it sets out to, and engages and entertains as it does so from beginning to end.

Whether you're a newcomer to Mamoru Hosoda's works or are intimately familiar with his output, Wolf Children is a must-see movie - if we guarantee one thing, it's that you won't be disappointed with it.

10
A simply superb film that anyone can relate to and enjoy.
COMMENT AND DISCUSS
blog comments powered by Disqus