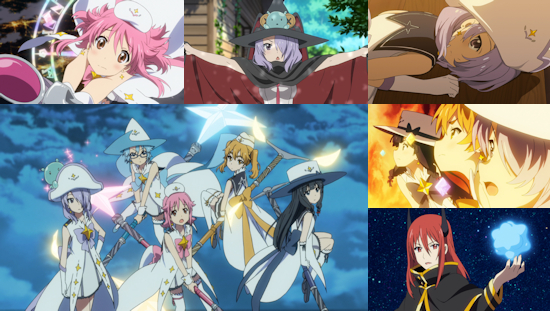 Over the years, anime has found itself party to some decidedly strange collaborations - who can forget the gratuitous shots of Pot Noodle in Freedom, for example? Even set against that bar however, the decision of car manufacturer Subaru to join forces with anime studio GAINAX is a decidedly odd one, only made stranger when you examine the results. If you're expecting Wish upon the Pleiades to be some kind of Initial D-esque racing anime, then you're very much mistaken.

Wish upon the Pleiades started its life as a short ONA series made available (complete with English subtitles) on a YouTube channel created for this collaboration - indeed, we even reviewed it on this very site, noting that its biggest hurdle was its short running time. We clearly weren't alone in that feeling, and so we find ourselves with a fully formed, full-length TV anime series to test that theory.

We join the series via Subaru (what else did you think she was going to be called?!), a quiet, clumsy but pleasant girl with a love of stargazing. However, one day her trip to the school clubroom which doubles as her observatory leads her stumbling into an unexpected location - a strange but beautiful greenhouse, which contains within it a sickly and slightly odd but otherwise friendly boy. This is the first hint that things are about to take an unusual turn in Subaru's life - the second is that she finds herself falling in with a group of girls working at the behest of an alien blob to recover the engine parts lost after his spaceship came crashing to Earth.

It turns out that these girls - and indeed Subaru herself - have all had their fates altered and intertwined in previously imperceptible ways, an event caused by this impromptu and unplanned Pleiadian "invasion" and providing further drive (do you see what I did there?) to assist this surprisingly adorable blob. With twelve engine parts to collect, it's time for the gang to transform into magical girls, rev up their broomsticks... sorry, "drive shafts" and journey into the skies and far, far beyond. Unfortunately for them however, they aren't the only ones with an eye on the missing parts...

The GAINAX of recent years may be very, very different than the one which brought us the likes of Gunbuster and Gurren Lagann, but at least some of the facets that made the studio what it was still clearly remain in its DNA, and as a result Wish upon the Pleiades feels very much like a very GAINAX series. This is particularly true in terms of the way that the series ramps up - what starts out as a relatively simple jaunt across the sky ends up with some moving tales to tell and an adventure that takes us into the farthest reaches of the galaxy. There's something pleasantly surprising about the way the series' allows its scope and ambitions to grow alongside the confidence and friendship of its cast in a way which also works as an examination of their own individual growth in experience and maturity.

The series also manages to dig into those characters really nicely on occasion. As a prime example, there's a wonderful episode where Nanako takes on a mission to retrieve one engine part alone, under the agreement that she'll call upon her friends once it's discovered. Thus, Nanako sets off alone, giving her plenty of time for reflection on her (often solitary) home life, the friendships her alien encounter has granted her, and ultimately a crossroads where she needs to choose between achieving her goal alone or relenting and opening herself up to the idea of relying on others. Add in the vast loneliness of space, and you have a fantastic little self-contained story that is a great showcase for what this series can offer.

Unfortunately, the downside of this is that you're ultimately left wishing there were more similarly strong episodes on show within the series. It takes a good six or seven episodes before things really pick up, leaving the first half of Wish upon the Pleiades feeling like a lightweight and meandering series that has no real direction without throwing out some hints at Ikuhara-esque undertones that the series never successfully manages to build on. It's a real shame, as the final five episodes really seem to grasp the nettle and work its characters and story into a truly compelling package, but for many that will feel like too little too late after so many wasted opportunities. Patience is a virtue in the world of Wish upon the Pleiades.

In terms of its presentation, the series similarly has some nice moments but is for the most part unremarkable - any sense of wonder comes more from the scope of where the show travels than how its presented, but it does at least broadly put itself across well save for some clunky CG work that rears its head in most episodes when the girls start racing around on their drive shafts. If nothing else, the show's character designs are uniformly appealing, and there's some gorgeous artwork that provides the mid-episode interstitial card to gawp at. As a subtitle-only series, we have no complaints about the show's subtitles or Japanese language track - again, everything here is effective.

Over the course of watching Wish upon the Pleiades, my feelings towards it shifted markedly - at the halfway point I was, quite frankly, pretty bored by the whole thing, yet by the end of the series I was enchanted by much of its cast, their stories and their organic growth on account of their adventures. This makes summing up the series incredibly difficult - there are some real gems of moments within the series that constitute great episodes in their own right, but the burden on the viewer to sit through a couple of hours of less compelling fare to get to them reduces those achievements markedly.

If you have the patience to take in the series, and perhaps revel in some of the small but satisfying moments that reveal themselves throughout its early running, you'll find yourself faced with some stronger fare later in the series. That is a big "if" though, and it's a lot of time to burn when, of course, the series will see you reaching for your laptop to put an order in for a Subaru Impreza WRX - or maybe that's just me...

6
Some strong late episodes don't make up for the unremarkable slog through its early episodes to get to them.
COMMENT AND DISCUSS
blog comments powered by Disqus