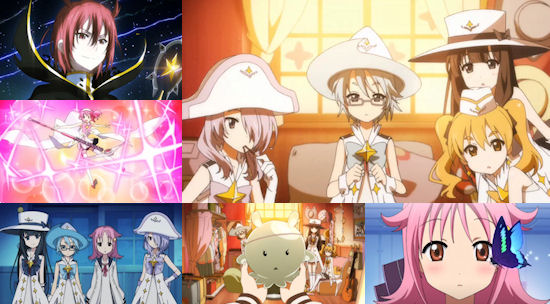 Wish Upon the Pleiades

Mention a collaboration between car manufacturer Subara and animation studio GAINAX, and chances are most of you would conjure up visions of some kind of Initial D-esque series featuring fast cars and... well, more fast cars.  Not so in the case of Wish Upon the Pleiades, a series of four short episodes now available exclusively on YouTube complete with English subtitles fresh out of Japan.

Instead, this series proves to be (of all things) a magical girl offering, which begins with the rather slow girl considered to be impolite by many Subaru (do you see what they did there?) witness some rather unique shooting stars in the sky.  Next thing she knows, the school club room to which she has access has been transformed into a spectacular garden while the room also contains a mysterious person named Minato, before Subaru then stumbles across another club which includes her friend Aoi amongst others.

This is no ordinary after-school club however, as its occupants are all magical girls while the club president is, to put it bluntly, a blob... an alien blob to be precise.  In fact, this club is little more than a vehicle to help said president return home, which can only be achieved by collecting fragments of the "engine" he requires to journey back.  However, the "Prez" (as he's known) isn't the only one after these powerful engine parts, setting up a face-off between this collection of girls as Subara joins their midst, with their opponent proving to be a familiar face to the star of the show at least...

With little more than twenty minutes of running time to work with, Wish Upon the Pleiades' biggest struggle is with the constraints of that running time - there's simply no opportunity to introduce any of the characters or explain their back stories properly, and even the main plot point of the show is vague in terms of the origins of these cosmic engine parts or exactly why the "bad guy" of the scenario wants the power these parts offer.  Although these short episodes do just enough to make the story and most of the character's actions comprehensible, this doesn't stop Wish Upon the Pleiades as a whole feeling more like a highlight reel for a longer series.  There's easily enough content and potential here to fill a full thirteen episode series without too much trouble... who knows, perhaps that's GAINAX and Subaru's hope in releasing these short episodes the way that they have?

Visually, Wish Upon the Pleiades is certainly an appealing show, with great character designs and some gorgeous backdrops to set them against - if nothing else, this is a sweet slice of eye candy that you might want to run your eye over for that reason alone.  It struggles rather to shoehorn its sponsor's product into the show's magical girl setting (although the girls magical wands/broomsticks make engine noises if that helps) and I can't imagine it actually selling cars as a result, but there is at least a certain amount of light and fluffy fun to be had from watching these episodes.

Wish Upon the Pleiades is, when push comes to shove, hardly a memorable effort or a particularly ground-breaking one in terms of its content, leaving us with an unspectacular yet cosy little series that is an inoffensive attempt to squeeze a vast amount of content into a very small segment of time.  Whether this is enough to persuade any interested parties to consider a full-on series of this magical girl show is another question, but beyond the specifics of GAINAX's effort here perhaps the most exciting thing for UK anime fans is to see a show streamed complete with English subtitles straight out of Japan with no need for middle-men.  Admittedly, this isn't the first time it's happened and the specifics surrounding this effort are rather unique, but it's another positive sign of anime producers looking outside of Japan for their core audience, and that can only be a good thing even if you aren't a fan of cutesy magical girl fare.

6
An ordinary yet undoubtedly good-looking short series that struggles to flesh out its story at all in the miniscule running time afforded it.
COMMENT AND DISCUSS
blog comments powered by Disqus