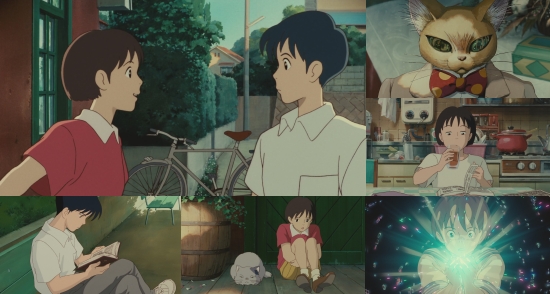 Whisper of the Heart (Blu-Ray)

As we continue to see Studio Ghibli's back catalogue brought back to the forefront of our minds via High Definition, Blu-Ray remasters, the latest film to get this visual upgrade treatment is perhaps one of the saddest back stories from the studio's catalogue.  Released in 1995 and based on a manga series of the same name, Whisper of the Heart was the full directorial debut of Yoshifumi Kondou, a man tipped as a potential successor to Hayao Miyazaki.  Unfortunately, that prediction was destined never to come to pass, as Kondou passed away just three years later, sending shockwaves throughout the studio that reverberated all the way through to Miyazaki himself.

In comparison to the fantasy settings of which Ghibli's work tends to be best remembered, much of Whisper of the Heart is very much grounded in reality.  At the heart (with every pun intended) of the story is a middle school girl and bookworm from Tokyo named Shizuku Tsukishima.  As Shizuku goes about her business checking ever-more books out of the school library, she begins to notice a pattern - each and every book she reads has also been borrowed from the library by another student named Seiji Amasawa, a boy that she can only picture in her mind as some kind of perfect "prince" over which she develops a crush based on his literary tastes alone.

When Shizuku loses a draft of a song she's writing for some of her schoolmates, the rude boy who hands it back to her while commenting on how cheesy the lyrics are seems like a far cry from the imagined wonderful boy from her library books - indeed, he couldn't be much further from the demure ideal in her head.  When a second chance meeting between the two of them angers her further, there's a clear rift between them coupled with more than a tiny dose of curiosity, and as further encounters bring them closer and closer it's eventually revealed that the boy in question is in fact Seiji Amasawa - cue a story of burgeoning love that threatens to be halted by Seiji's desire to study abroad so that he can follow his dream.

It probably goes without saying that the first thing to strike you about Whisper of the Heart is its visual beauty, with impeccably animated characters whose movement and action rarely feels anything other than fluid or natural, set against backdrops that are simply gorgeous representations of the film's quiet Tokyo suburb offset by some very brief dalliances with Ghibli's more traditional fantasy subject matter.  So stunning are the scenery, depictions of a cluttered domestic home and character depictions that I'd wager you could easily sit through the near two hour running time of the film just to enjoy that alone.

In terms of the actual story of the movie, I'm a little more reticent to be quite so glowing in my praise - while both Shizuku and Seiji work well as characters on their own, and even though together they have a strong dynamic which feeds the first half of the film wonderfully, there's something that feels a little "off" and even forced about their relationship and feelings for one another.  Perhaps its simply that too much is squeezed into the film's running time, but Shizuku's shift from irritation to fawning over Seiji happens too quickly for my liking, and from that point forth their relationship barrels along at what seems like a million miles an hour all the way through to the film's climax - it's touching, for sure, and its heart it in the right place with its philosophy of following your dreams and working hard to achieve them, but it's a little idealistic for my jaded mind perhaps.

Even in spite of this complaint, and with the disclaimer that this is a very sedate affair - don't go expecting another Princess Mononoke here - Whisper of the Heart is broadly a success at what it does.  It has characters that you can get behind or at least feel a connection to, which leads into some touching moments later in the film as its story progresses.  That it manages to do this without ever becoming overly sentimental, and with just the right amount of comedy or servings of flights of fancy to balance its mix of elements, only serves to strengthen the impression that this is a very well-crafted work indeed.

Given our previous comments about its impressive visuals, it probably goes without saying that the film's Blu-Ray release is breath-takingly beautiful and well-deserving of the excellent High Definition remaster provided to it.  In terms of audio we have no complaints either, even if our personal preference is very much with the original Japanese audio over the English dub for this particular Ghibli outing.  Of course, also provided in this new Double Play release is the film on DVD, so even if you aren't sat comfortably atop the Blu-Ray bandwagon yet you can still pick up and enjoy this movie.

Although we wouldn't particularly rate this as one of Studio Ghibli's "classics", by the same token we can't call it a disappointment by any definition of the word either - Whisper of the Heart is a succinctly delivered and beautifully presented story that only really flounders when it comes to the believability of some of its romantic elements.  It probably won't appeal to those who have a sole preference for the studio's fantasy-centric output, but there's still a fair amount to like here and there can be no doubt whatsoever that this is an animation well deserving of its High Definition treatment.

Blu-Ray and DVD "Double Play" pack - the Blu-Ray version of the film features English and Japanese DTS-MA 5.1 audio and English subtitles.  Extras include storyboards, trailers, TV spots and features surrounding recording of the film's dub, background artwork from The Baron's story and a look at the work of Naohisa Inoue.

7
Some of its romantic elements feel rushed, even forced, but this is otherwise a beautifully delivered and presented Ghibli outing that deserves a High Definition viewing.
COMMENT AND DISCUSS
blog comments powered by Disqus