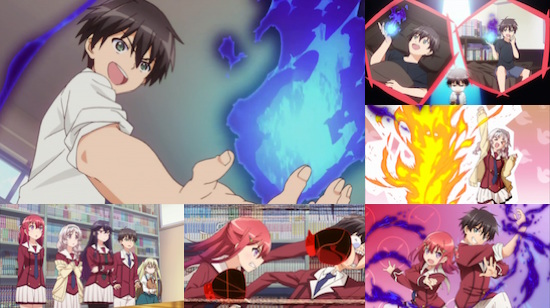 When Supernatural Battles Became Commonplace is described by Crunchyroll as "A group of five boys and girls suddenly acquire supernatural powers. Ready to fight in galactic battles to defend the human cause... they are struck by the realization that there are no wars, no conspiracies, no evils empires, no nothing in their high school life. They instead decide to idly have fun by wasting their powers away". This should be your first clue that the title of this series is something of a deliberate misnomer; three episodes in and aside from a few (more or less) friendly skirmishes between members of the club and the student council president there have been precisely zero supernatural battles and one training exercise. So, When Supernatural Battles Became Commonplace is not the fantasy action series that the title implies, but in-fact a high school comedy. However, don't expect too many laughs from this particular effort.

Mysteriously one day, the five members of the Senko High School Literature Club develop superpowers, although so far there has been no real call for any of them to use their newly obtained abilities. At the head of this group is Jurai Andou: A "chunibyo" or "chuni" sufferer ("eighth grader syndrome" - or just plain delusional to us here in the UK) who has delusions of having superpowers and acquiries the "Dark and Dark" superpower, a seemingly useless cold burning flame. Though Andou continues to be completely delusional even after developing his long dreamed of superpowers. Alongside him are Tomoyo Kanzaki, a fiery redhead who while being almost constantly exasperated by Andou's antics actually seems quite fond of him - her power "Closed Clock" allows her to freeze time; Hatoko Kushikawa, the airhead of the group who constantly takes Andou's antics seriously - her power "Over Element" gives her control over all the elements, making her a bit like a moe version of Avatar Korra; Sayumi Takanashi is the president of the Literature Club, resident martial artist and all-round scary lady, especially if you imply she is cute in any way - her power "Root of Origins" is the power of restoration; finally there is Chifuyu Himeki, who for some reason attends the Senko High School Literature Club every day despite being an elementary school student - her power, "Genesis", allows her to create any element and manipulate space.

In essence then, what we have here is a group of anime stereotypes wielding hugely powerful abilities (for the most part, aside from poor Andou) which they never really use in anger. In the absence of anything to actually do with their powers the group's lives proceed as normal... well, as normal as life in an anime high school can get, with the Literature Club members utilising their powers mostly to aid the mundane issues everyday life throws at them. That juxtaposition between what you expect of supernaturally gifted high schoolers and what actually happens to the members of the Senko High School Literature Club makes up the vast majority of the comedy in this series, unfortunately most of the jokes fall flat. That, ultimately, is all you need to know about When Supernatural Battles Became Commonplace - it's a comedy that is not really funny. The animation is decent enough, as is the voice acting, in most regards the series is perfectly competent, it just doesn't do what it sets out to do: Make you laugh.

Perhaps the most surprising thing about When Supernatural Battles Became Commonplace is that it's a light novel adaptation brought to you by Studio Trigger. That's right, from the studio that bought you the highly original and outrageous Kill La Kill comes... a mediocre light novel adaptation. Though if you did not already know that, it's not something you would be likely to guess from watching the series. Aside from a couple of subtle references to previous Trigger efforts you would be forgiven for thinking this could have just as easily been adapted by almost anyone else to a similar standard.

You can currently watch When Supernatural Battles Became Commonplace in streaming form on Crunchyroll.

5
While competent in most regards this is a comedy that is not really funny. Need we say more?
COMMENT AND DISCUSS
blog comments powered by Disqus