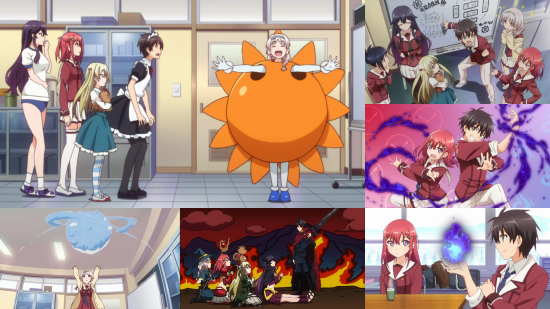 Being ordinary is boring. We are all fundamentally the same. Every member of our species has the same basic parameters, exist in the same kind of world and are dealt the same general hand when it comes to abilities. Unfortunately, super powers don’t exist. I say unfortunately as, I am hesitant to admit, a bit of a fantasist. There was a time back a few decades ago where I would sit in class, normally in English Literature, fantasising about having special abilities or being in a unique position such as being a starship captain. I wanted to be unique.

Uniqueness and being special is a trope used quite often in anime. It is a theme which plays itself out in several ways insofar as the main protagonists in most series tend to be “unique” compared to the rest of society. In When Supernatural Battles Became Commonplace our male protagonist, Andou, is exactly what I was, though perhaps a bit more damaged. He fantasised about having evil powers. He has written stories. He gives his friends in the English Literature club nicknames and super power names, while all of it is fantasy.

Well, its fantasy at first... then something happens. These powers become real. Suddenly, Andou finds out that the girls in his club, and in fact elsewhere in the school and wider society, have incredible superpowers ranging from the control of all natural elements, stopping time, regeneration, the power of creation or the power to steal superpowers. Andou’s ability however... is to be able to create a little blue flame in the palm of his hand. How cute. Though this flame isn’t quite what it seems, and actually Andou is potentially the most powerful of all. Or, perhaps it’s all just make believe and the will of a bunch of bored gambling fairies...

This is where the series kind of loses the plot a bit. Sure, every member of the Literature club have supernatural powers. Yes, there is a “war” going on of which they are oblivious and occasionally someone appears to try and cause issues. But actually, the super power element is used mostly as a plot device - a means to keep the club together. Almost as if the “chuunibyou” is the social glue. I mean, it’s a nice coincidence that these powers, borne from fiction which live in your heart, have happened to a club devoted to writing and enjoying fiction. It’s almost like bestowing a fully functional space ship to a Science Fiction club.

The everyday activities are so normal that actually I wouldn’t even class this show as a supernatural series - in fact the series is a slice of life affair for the most part, but slanted towards the harem side in a way which oddly reminded me of Toradora for some reason, though I guess it’s due to the way the relationships evolve. Andou is surrounded by four girls in the Literature club, all of whom have some kind of feelings for him (legal or otherwise) which evolve during the series, and unfortunately unlike the series previously mentioned, all of these are unrequited. Like most male anime characters, Andou is a good natured, weird guy. He is nice to the girlsm does things for them and is protective. But he is also completely obtuse and doesn’t see what is in front of his face. The standard male protagonist template all over.

Of all the characters, I am torn between Tomoyo and Chifuyu as my favourites. Both are completely different in terms of character. Tomoyo is your standard tsundere character, while Chifuyu would readily fill the gap of the “younger sibling” character nicely. However they are both well fleshed out (and no, not in that way). Tomoyo is a bit of an enigma. She berates and gives Andou a hard time of his fascinations and fantasies, but really she is exactly the same. She is also neck deep in an ocean of fiction and fantasy, and while she has a bit of a violent and loud side, she is also meek and caring. Chifuyu is just cute. Mature for her age she wants nothing more than to grow up while her beliefs and sensibilities align with Andou and the rest of the club. She reminds me of my niece oddly enough, which is probably why I like her character so much.

As Trigger anime goes, this is a bit of a weird one. I am used to Studio Trigger making series which are much more... fast-paced. This is not what you would expect from the team behind Kill la Kill at all. However, When Supernatural Battles Became Commonplace is a good series: it is funny, and although its pacing is poor the characters are likeable and they work well together. The series tries to take a more serious turn towards the end, however this plot device is left way too late and is a complete waste in my opinion. It would have worked better if those twelve episodes were spent having more high school antics, as that’s pretty much what the entire series consists of, rather than trying to tie in a mythological wargame. If you are going to have supernatural battles, you do need to squeeze them in somewhere I suppose. Like other Studio Trigger works, the art and animation is flawless and I actually have zero criticisms about it.

I do have an issue with the English dub however. I found the writing to be very heavily westernised to the point where there were mismatches with the Japanese dialogue. Although it does work, I think some of the voices, especially Hatoko and Naoe, could have been better cast. The Japanese dub works slightly better as there is more enthusiasm and variation in the voice acting. Though I did end up watching the entire series in English and towards the end I got used to it. It is always good to have that flexibility.

When Supernatural Battles Become Commonplace is a fun little series. It isn’t Studio Trigger’s greatest work, but it is pretty and well animated, if flawed in its writing and acting.

6
I only hope that supernatural battles like these never become commonplace.
COMMENT AND DISCUSS
blog comments powered by Disqus