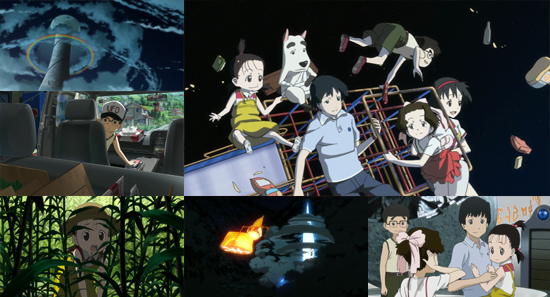 Welcome to the Space Show

Welcome to the Space Show finds itself following what begins as five children spending their summer breaks together. All of them differ in age and gender but more importantly, they differ in personalities and drive. The children are what really make this film a worthwhile viewing experience, as the interactions between one another and their overall impact on the plot itself become increasingly marked.

The film opens with a fast-paced, well animated bout of action between three alien life forms that are later revealed to be fighting over a substance that grows on Earth named 'Zughan', although their exact motives are unclear at this point. This scene sets quite a high bar for the film, and unfortunately this aspect of the film doesn't even get addressed until around half way through the film, as directly following this barrage of excitement we are introduced to the protagonists of this adventure.

Lead by the oldest child of the group, Kiyoshi, the group in question start their summer vacation trying to find the lost pet of young Amane, a fluffy eared rabbit by the name of Pyon-Kichi who sister Natsuki has regrettably lost. This is something that Amane struggles to forgive her for, which isn't helped by Natsuki herself, who equally struggles to find a way to apologise. Then there’s Koji, the geek of the group who is fascinated by space and all things nerdy, and probably the most loveable of the children. Finally we have Noriko; aside from having a younger brother who loves to roam around with his pants off she doesn’t do a whole lot. With that said I feel it’s unfair to pick one character over the rest in terms of strengths and weaknesses, as they all collectively work off of one another in an attempt to make the story relatively grounded and relatable for the audience.

While their hunt for Pyon-Kichi continues they come across a crop circle presumably left by the aliens from the opening scene. Amane comes across an injured dog that they bandage up and bring back to health. As you might suspect, this isn’t any ordinary pooch - in fact he’s not even a dog, but rather a resident of the planet Wan named Pochi. He thanks them for saving his life and treats them to a trip into space; to the not-so-dark side of the moon.

Left behind are the greens and browns of the Japanese countryside as we are treated to vibrant colours with strange-looking cityscapes and alien character designs.  Admittedly the film looks great throughout, even if it does feel like you’ve seen it all before somehow. This isn’t surprising if you’ve seen any of Hayao Miyazaki’s work, although whether it’s a homage or not I’m not entirely sure. Still, we can’t deny the film its accolade of looking great and featuring consistently great animation.

This leads onto what I can only describe as the weakest part of the film -  the movie becomes extremely long-winded and is guilty of what feels like slightly sloppy storytelling as it goes about its business. We learn a little more about Pochi’s past and how he relates with the star of The Space Show, a variety show that’s a roaring success across the entire universe. This entire segment, as great as it looks visually, just seems to go on and on. For example, at one point the kids end up getting jobs to pay their way back to Earth - I feel this could have been a plot device covered in a few seconds, perhaps by way of a montage. Instead we see what each and every child gets up to. The only one with anything worth seeing is the experiences of Koji as he becomes friends with a young alien girl, which becomes quite a sweet, heartfelt engagement.

We then hit the half way mark of the film, at which point it almost feels as if very little has happened over an incredibly long period of time. Thankfully, the story finally decides to put its foot down at this juncture and things start happening apace. There are kidnappings, characters nearly die and there are some damn impressive action scenes that had me glued to the screen and interested in the outcome of the overall story throughout. As messy and poorly paced as the overall finished product feels, it actually works as a whole. By no means is it without fault, but the last act of the film redeems itself and returns the film to what it promises to do in those early scenes.

Plot aside, the English dub for Welcome to the Space Show is glorious. There’s not a single voice that feels out of place, especially with the children who have been superbly cast and do a stand-up job in their roles. I know this doesn’t affect some of you who’ll be sticking with the Japanese audio track, which is perfectly fine in its own right - but, for those of you who are not immune to watching the English dub unless its god-awful, you’ll be happy to know you can stick with the English dub and not feel like you’re missing anything.

Overall, Welcome to the Space Show doesn’t do anything we’ve not seen in the past, but that’s not to say it isn’t worthy of your time. It’s certainly a film for the entire family, and beyond the issue of it very nearly over-staying its welcome, the film is funny and has some genuinely exciting scenes. You’d have to have a heart of stone not to feel sympathetic to this likeable cast of characters.

English and Japanese 5.1 audio, English subtitles.  Extras on the disc are made up of a trailer and storyboards for the film.

6
If you can make it through the slow first half of this film, you’ll find yourself being rewarded for your efforts.
COMMENT AND DISCUSS
blog comments powered by Disqus