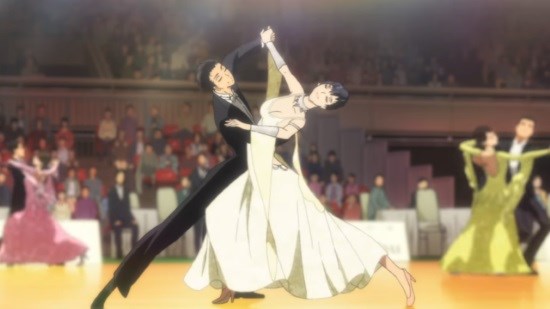 Every season has at least one show that bears the brunt of peoples expectations and this season is no different, as Welcome to the Ballroom announced itself as a contender for show of the season. Promising to be a compelling, elegant sports anime filled with gorgeous animation by Production IG. That's certainly a tantalising prospect for any anime fan. Now that we're a few weeks in let's see if anime's rival to Strictly Come Dancing can waltz us away.

Young middle schooler Tatara is a bit listless, it's almost time to head to high school but he doesn't really know what he wants to do in life. His eyes are opened to a new possibility, after he is saved from a mugging, by a world-class dancer. Tatara is whisked away, initially against his will, into the world of ballroom dancing, alongside his classmate Shizuku. The more he witnesses of this world, the more he feels desperately drawn to it. To the amazement of those around him he might actually have a talent for dance, as he sets his eyes upon the goal of competition.

If you had told me about this show in passing I'd probably never have watched it. After all, ballroom dancing can be bit of a hard sell to many people - It's the sort of thing my Mum might insist on having on the telly while I'm visiting, rather than anything I'd choose to watch. But once you see a glimpse of the show in action, in it's trailer for example, it's hard to deny that there's something alluring about it. At first glance it would be easy for someone to pass this off as another Yuri on Ice, but there's much more to Welcome to the Ballroom than that. From the moment you see Production IG's incredible animation and striking character designs being put through their dancing paces, you just become more and more drawn into the world that's presented here.

It helps that the cast are such a lovable bunch. Tatara himself is a genuinely likeable character, and his slightly embarrassed enthusiasm is endearing. As are the reactions of his new friends and teachers, who are all well-drawn and distinct. Everyone just has a sense of reality about them: From the master who becomes angry when his chosen career is taken lightly, to the amateurs who constantly strive to better themselves, often at great cost.

There are a few issues along the way however. The first three episodes are all great but they are a little unstable timeline wise. They have a tendency to jump forward unspecified periods of time between episodes, which can be a little jarring. Production IG's animation is spectacular, but there are often moments when still shots are overused. The character designs are superb, but some of the charaters (such as Tatara and Shizuku) are drawn far too old for characters who are supposed to be 14-15.

These are but little niggles, and the series itself is brilliant combination of dance, great animation and a fantastic soundtrack. This all adds up to Welcome to the Ballroom being a show that will leave you waiting with bated breath to watch the next episode. My advice is to put aside your reservations and give the show a shot. For once all the hype and anticipation are more than justified!

You can currently watch Welcome to the Ballroom in streaming form on Amazon Video.

9
Welcome to the most suprising show, that you may just fall in love with this year!