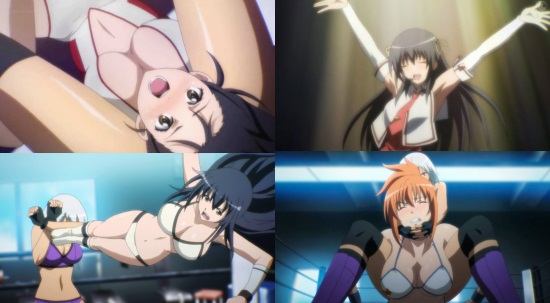 Idol singers and pro wrestlers aren’t exactly two things you put together very often. It calls to mind an image of The Rock in a short skirt singing high-pitched J-pop (admittedly a much more entertaining concept that suffering through another one of his attempts to be an actor). But this is anime we’re talking about here, and it's women's wrestling in our sights - with that it’s time to ring the bell and go a few rounds with this season's "Wanna be the Strongest in the World".

As part of a promotional event, two idols from the AKB48-a-like group Sweet Diva are asked to go down to Berserk, a women’s wrestling gym for a lesson with some of the gym's stars. However, after some ill-timed mouthing off from young idol Elena the pair find themselves instantly at odds with the gym's resident wrestlers and in a somewhat foolish fit of pride our heroine Sakura finds herself challenging one of its top stars to a full-on bout in the ring in front of a live audience. Things do not go well for some reason.... rather than accepting her defeat, Sakura makes the bewildering choice that she will put her career as an idol on hold to become a pro wrestler in order to defeat her new rival Rio.

From this point on... not much happens story-wise if we’re honest, over these first three episodes anyway. The series is much more interested in exploring its chosen fetish... I mean subject... and focusing in on the wrestling aspect over looking into any character development. Although said tongue-in-cheek, fetishistic is the best way to describe the show. Not being a wrestling fan myself I can’t comment on the realism of the holds and throws and rules that are played by here, but it very quickly boils down to one girl putting another in a bondage pose and making her scream while the camera lingers over barely concealed crotches and bosoms. It’s actually quite disturbing to watch at first, though it quickly becomes fairly tedious as it takes up at least half of each episode. One assumes that somewhere there are people who find this highly erotic but it doesn’t do much for me – I certainly assume that’s what’s intended anyway as there are also some standard blu-ray-friendly shower scenes around with steam ready to be removed once the TV censor has gone to bed. If the series had dialled things back on the masochistic aspects of the show and gone either for a more sports-show feel or down the Queen’s Blade route of total fan service the show could have been quite good fun, but so far it’s certainly not something I’d recommend to most people.

On a technical side this is director Rion Kujo’s first solo effort that hasn’t been pure hentai, and it really shows here. The wrestling scenes lack any real pacing or action and the aforementioned hold sequences really betray his background in more adult-oriented works. A fair few of the other production team members seem to have come from similar backgrounds sadly, including the lead writer, and it really doesn’t do the series any favours in what seems to be an attempt to give some newer blood a chance to make a foothold with a series that people thought would be popular. In particular, its disappointing to see such a talented voice cast go to waste with the likes of Ayana Taketasu (K-ON's Azusa) and Kana Asumi (Hidamari Sketch's Yuno) given nothing to do but foley work for 90% of their time.

At present it’s difficult to see the series being able to pull itself back on track after this fairly dismal starting effort. Possibly wrestling fans will find more here than I do so I’ll give some benefit of the doubt on that score, but even they won’t be able to overlook the terrible writing and poor direction on display here. If this was an attempt to showcase some newer talent then things have back-fired badly.  This is definitely one to pass on.

You can currently watch Wanna be the Strongest in the World in streaming form on Crunchyroll.

4
Down for the count.
COMMENT AND DISCUSS
blog comments powered by Disqus