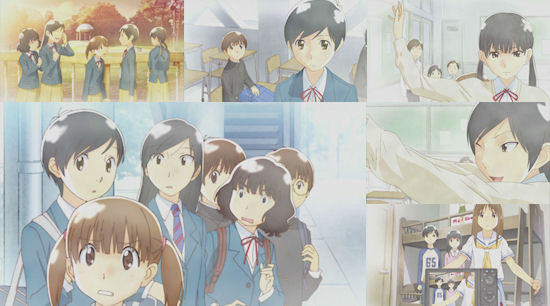 While it's hardly unusual to see cross-dressing within anime, it tends to be played almost exclusively for laughs in the midst of comedy shows, working its way into a series as a throwaway gag or sketch here and there more often than not.  This is far from the case with Hourou Musuko, aka Wandering Son; a series which takes a far more restrained and serious look at gender identity issues which is, to be honest, just as much an angle into a broader study of growing up and adolescence in general.

At the core of Wandering Son are two characters - Shuuichi Nitori, an effeminate boy who feels most comfortable dressing as a girl and Yoshino Takatsuki, a girl who really would rather be a boy, truth be told.  Rather oddly for a manga to anime adaptation, AIC Classic (the studio on production duties here) have chosen not to start this story right at the beginning, and thus the opening episode of the series jumps into a point later in the original story.  This means that we join Nitori, Takatsuki and their circle of friends and new acquaintances as they start their life at a new school - a ripe point for drama in its own right.

This odd entry point for newcomers to the story is a potentially risky one, yet Wandering Son just about manages to pull it off, filling in important segments of its back story as it goes along (most notably the state of Nitori and Takatsuki's relationship) via the kind of normal and occasionally cruel banter you might expect from a bunch of school kids on the cusp of puberty, coupled with the lead characters going about their normal business.  Come the end of episode three we have a much better handle on a love triangle which stands out in a sea of increasingly complicated relationships, as well as plenty of other intriguing inter-relationships between various individuals.

Away from its story-telling elements, we have to get something else out in the open first - Wandering Son is a visually beautiful work.  Although its watercolour inspired look might not be for everyone, it meshes perfectly with the tone of the show itself and offers up some decidedly Makoto Shinkai-esque backdrops and scenery that is occasionally breath-taking, particularly for a television anime series.

Once you've stopped drooling over the artwork itself, Wandering Son is no slouch when it comes to actually delivering on its core story elements.  The first episode in particular is an excellently realised blend of drama with slice of life elements and an occasional sprinkling of humour, and while subsequent episodes don't hold quite the same dramatic impact this simply gives it more time to drill into the particulars of its characters with an honest and frank believability that keeps the whole thing watchable from beginning to end.

Make no mistake, Wandering Son is a very different beast from most other anime as befitting its place on Fuji Television's noitaminA slot, and this unique outlook on its various subject matter can be demanding or even uncomfortable for the viewer at times; just as the best drama series should be.  If you're willing to put some effort and concentration into it however, Wandering Son is a beautiful, careful and considered tale that is anything but "just a series about cross-dressing" - it is, instead, a far broader story of growing up and the crises, confusion and simple delights of adolescence and puberty.  This makes for a surprisingly inclusive series that most of us can relate to, having grown up and gone through similar circumstances ourselves, and a show that strikes out on its one as an anime far removed from the vast majority of its counterparts - a fact which makes it a must-watch in our book alone, before you even consider its visual and dramatic appeal.

9
A beautiful and considered coming of age drama that deserves all of the plaudits it receives.
COMMENT AND DISCUSS
blog comments powered by Disqus