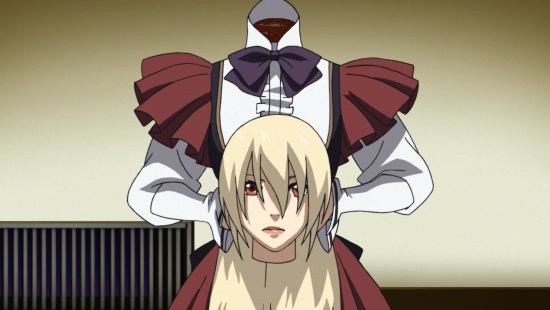 Let me set you a scene for those of you who weren’t at Scotland Loves Anime 2018. Jonathan Clements came on and introduced the film and we were introduced to two, rather than one, features. The first, a zombie-themed short called Walking Meat (21 minute short) and the second was the Calamity of a Zombie Girl, our main feature.

What we didn’t expect, at 2:30pm, was for two hours of non-stop gore, zombies and ludicrous deaths and while this isn’t a review of Walking Meat, I feel that I need to say some words on this short. My first words, it was better than Calamity of a Zombie Girl. We begin in a world where zombie meat has largely replaced farmed livestock as a source of protein. Zombies are hunted, stored, disinfected, and processed in giant factories. We meet three young trainees on their first day in a factory, with a disgruntled former Zombie Hunter, who is their trainer. The computer crashes, the factory goes haywire, and we end up in an amazing escape action where they need to run away from highly mobile zombies, complete with grotesque disembowelment, gore, guts and youtubing.

Walking Meat poked fun at millennials, dropped them into a full time job, and gave us 21 minutes of pure zombie comedy and action. It was superb and showed what CGI animation could do.

Then, to follow this fun, came Calamity of a Zombie Girl. I think its probably best to start with a quick synopsis, before we go into the bloody gory details. The members of the Occult club at a university are tasked with “investigating” (read, breaking into) the archive of the university library on the hunt for a hidden treasure. One of the students discovers two large boxes in the corner of the room, opens them and discovers two mummified corpses, fully dressed, one a blonde girl circa 16 years old, the other dressed as a maid and looking much younger. She investigates closely, digs her hand inside the older girl, and removes a glowing stone.

Unfortunately, these mummies aren’t dead, they were merely sleeping and the act of removing the stone resurrects them. The two girls rise from the dead and the maid, Alma, gets straight to work gathering information for her master, Euphrosyne. It doesn’t take long for the first casualties to mount up as they integrate themselves in the modern world, assuming the forms of staff members as they try to work out who has stolen Euphrosyne’s magic stone.

What follows is perhaps one of the most ludicrous detective attempts as the two resurrected mummies hunt for the stone by murdering their way through the student dormitory, killing each of the Occult Club members in imaginative and bizarre ways. I have never seen anyone killed by a washlet, until I saw this film.

Unfortunately, the plot is simply dire. The evil villain is obvious from the first act, the film has some rather peculiar pacing in the final conflict, and the motivations of the Occult Club members seems to be poorly defined and explored.

But, we didn’t come to see a film involving zombies to enjoy Shakespearean writing. We want gore, ludicrous action and gore-service. A film of this genre can only be utter trash, and, even with its failings, Calamity of a Zombie Girl delivers, but with a twist. Unlike most zombie films where the rampaging hungry hoard is the “villain”, actually the writing forces you to side with the resurrected mummies and I found myself caring more for them, and not giving a flying toss for any of those who they killed, maimed and slaughtered in the hunt for their stolen treasure.

The weakness in this film, other than the writing and plot, is the animation. To say it looks dated would be me being nice. Compared to the bright, vibrant and energetic animation of the Walking Meat short which came before, Calamity of a Zombie Girl looks and feels cheap in both its composure, camera angles and in its animation. Case in point, during the final battle, Euphrosyne is losing the fight and runs away from her assailant. The screen fades to black, and suddenly comes back full with both Euphrosyne and her assailant, facing off inside a gymnasium with basketballs. From a few seconds earlier when they were at each other’s throats, to being in a gymnasium. Very weird storyboard decision there and I believe that some scenes got cut.

The characters feel very similar in design and their animation to the earlier Fafner series and while the character designs are good, especially with Alma and Euphrosyne, the rest of the cast and setting just felt flat.

Voice acting was one of the technical aspects which I didn’t find fault with. The actresses who voice Euphrosyne and Alma did their jobs very well and I felt like they got into their characters well. The rest, again felt flat.

I did have a problem with them killing a dog and even with head splattering, decapitation, removal of limbs, disembowelment, I couldn’t watch this scheme. It felt un-necessary especially

Again, what do you really expect from a zombie film? If you expected gore and fun, and a lot of laughs during some inappropriately violent moments, then Calamity of a Zombie Girl, will be worth a punt.

Calamity of a Zombie Girl will likely be coming to a home video release in the near future.

6
Gore, Guts, Grime and Zombie Girls. What more do you need?
COMMENT AND DISCUSS
blog comments powered by Disqus