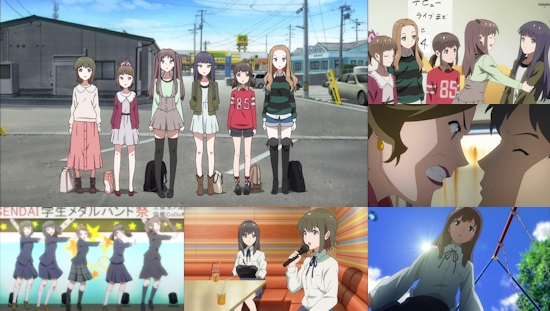 The fondness of anime producers to screen a short film as a precursor to a TV anime series has been a thorn in the side of western simulcast viewers for a little while now - with those screenings limited to physical theatrical runs we've often been left shorn of important context or information to accompany a series, which proved particularly tricky with the likes of Un-Go, where that context was all-important.  Kudos then to Crunchyroll and the production committee for Wake Up, Girls in realising the insanity of this situation and its limiting nature on western fandom, which has in turn brought us Crunchyroll's first ever English territory movie premiere online in the form of this idol show's prequel movie, Seven Idols.

Set in the city of Sendai, we join the story with an introduction to I-1 Club, a behemoth of the idol world that has, to all intents and purposes, conquered the Japanese entertainment industry entirely.  It's a situation that has doubtless caused no shortage of envious eyes, not least those belonging to the president of a small talent agency known as Green Leaf.  Down on their luck and with acts falling off their books faster than leaves in the autumn, the company desperately needs a big hitting act to pay the bills, and what better way to create that hit than to jump on the bandwagon and form an idol group?

It's left to hapless manager Matsuda to scout out and persuade some talented - or at least enthusiastic - girls to join the group, and although his efforts can hardly be called competent he somehow manages to assemble a ragtag crew of wannabe idols, from a maid cafe part-timer through to a ramen shop waitress and all the way on to the obligatory plain high school girl.  Although the group has a mixture of talent and desire to succeed, something is clearly missing - a so-called "centre" to lead the group and give it a focal point.

As it happens, there's a perfect candidate in Sendai - a girl who is both eye-catching and talented, and what's more she even has experience in just such a role, as a former centre of I-1 Club no less.  The trouble is, this girl - Mayu Shimada - has absolutely no interest in life as an idol after "graduating" from I-1 Club, and in fact the whole experience seems to have left her soured and upset.  With no other options in sight, can Matsuda persuade Shimada to change her mind, and if he does can the "Wake Up, Girls" triumph against adversity and complete their first live gig?

If you've watched any of Japan's idol anime output of recent years, or indeed are familiar with idol culture as a whole, you'll probably know how the script usually works - a group of girls are assembled, instantly become best friends and rise almost effortlessly to success while having huge amounts of fun, travelling the world and involving themselves in the bare minimum of drama.  Well, that or they fly around in mecha saving the galaxy from totalitarian censorship, but let's take AKB0048 out of the equation for a moment.

Although Wake Up, Girls! Seven Idols doesn't entirely subvert this traditional take on the idol anime series, is certainly has a more grounded and realistic view of the whole affair - a love of music and dance isn't the talent agency's motivation, it's purely down to money, and the well-being of the girls often seems secondary to that pursuit.  It's also suggested that Shimada's time with I-1 Club was hardly all flowers and kittens, with some deep mental scars apparent in her memories of life as an idol.  Even the film's closing set piece as the girls perform at their first ever event seems to hint as the exploitative nature of idol culture, as skirts flip up with panties on show while the camera focuses on this over and above much of the actual dancing.

This slightly grimier take on idol culture might be a whole lot more refreshing were it not for a couple of issues.  Firstly, we never spend any real time getting to know the characters that eventually make up the Wake Up, Girls - they're as one-dimensional as any other two-bit idol anime, notable only by some tired character trope or other.  You could argue that this could be the series making some further commentary on both idol anime and the wider culture beyond it, but we're not buying it on this occasion - make the girls into three-dimensional characters with lives and extensive ambitions and it would be much easier to care about them than the vapid cardboard cut-out characters we're presented with here; even Maya's plight is half-baked to the point of lacking any sustained interest, which threatens to sink effectively the film's biggest plot point.

In turn, this gives rise to a suspicion that the film is trying to have the best of both worlds - it bemoans an industry where idols are cash cows rather than talents to be nurtured, then treats its characters like pieces of (merchandisable) meat for much of its running time as it parades them around and never lets them do anything interesting beyond their carefully regulated character hooks.  Even the aforementioned dance sequence, although the most impressive visual turn in the film, feels more like its gaining some cheap interest from fans rather than denouncing the horrors of exploitative fan service.

As you might expect given its nature, the movie's animation quality doesn't offer up much over and above your typical television anime series - its dance sequence is impressive (if only because it eschews using 3D animation for the whole thing), but the overall look of the film is pretty variable and not the kind of quality you might expect typically from a film.  It's certainly "good enough" and does the job but little more, and the movie's voice cast also struggle to really stand out at any point with their efforts.

Having said all of that, I don't want to beat Wake Up, Girls with the stick of hypocrisy just yet - as an opening to the TV anime series it's a solid effort that offers up some interesting insight as to what its aims might be while also giving us some fleeting insights into the cast.  If the series proper runs with these ideas in a fearless and interesting manner it could become something genuinely worthy of discussion and praise, and whether you're a fan of idol anime or want to see someone attempt a more realistic take on the idol industry you certainly shouldn't give up on Wake Up, Girls just yet.

You can currently watch Wake Up, Girls! in streaming form via Crunchyroll.

6
A decent lead-in to the series proper that avoids the tropes of other idol anime, but threatens to be devoid of character in the process.
COMMENT AND DISCUSS
blog comments powered by Disqus