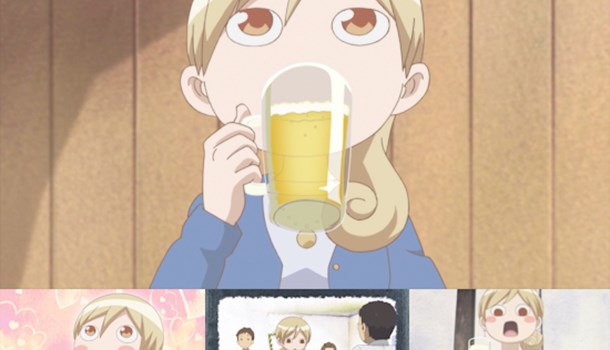 We often skip out on reviewing series of shorts here at UK Anime - after all, what's the point in writing a review that's going to take longer to read than watching an episode or two of the show and then judging for yourself? Sometimes, however, we sit fit to break that general rule, either because we feel like or we have something particularly interesting to say.

In that mould, Wakakozake fits into both of those categories, as a series of very short, two-minute episodes that breaks away from your typical short comedy series to offer something decidedly different. Its setup is simple enough - 26 year-old Wakako is a normal, everyday office worker who spends her days toiling, but her free time enjoying the simple pleasures of eating out and enjoying a drink or two in the process. Thus, each episode follows our crazy-eyed protagonist (seriously, her eyes are on the wrong end of the "terrifying anime stare" scale) as she finds a restaurant that fits her particular mood and circumstances for that day, orders food and something to drink, and then enjoys said meal.

While you might be tempted to label that premise as boring, the reality of the way in which this pans out deserves a different identifier - "zen". There's something incredibly life-affirming and tranquil about Wakako's existence - her thoughts on how good a meal or a cold beer tastes is often simply a trademark exclamation of "Pushuuuuu", and although she carries her own daily stresses about working life from incompetent juniors to the hassles of giving a presentation in front of others, it's nothing that some good food or alcohol can't solve to prepare her for the next day. This is the life that most of us lead - we wake up, go to work, get fed up of work, then spend the evening trying to recuperate from it - yet the show isn't about escaping those strictures or yearning for a better existence, it's all about accepting the good and bad of normal daily life and learning how best to wash away the stresses and strains that come with it.

This attitude makes Wakako hugely endearing - many an anime character placed into this scenario would spend her time fretting over why she's single or drowning her sorrows in copious amounts of beer. Not Wakako - she revels in being able to eat what, how and where she chooses, and luxuriates in her solitary existence and the freedom it gives her. This young woman is having a whale of a time while still existing as a "mere" cog in the wheel, and the result of her incredibly small-scale adventures is weirdly life-affirming to watch.

Then, of course, there's the food itself, which to be frank is clearly granted far more of the show's meagre animation budget that anything else within the series. Each episode, Wakako orders a different dish, be it an old favourite or a new adventure in culinary delights that she's never tried before, and of course we get to see the ordered dishes served up (and sometimes prepared too) in their mouth-watering glory - not in the insane style of Food Wars or with the near-pornographic presentation of Gourmet Girls Graffiti mind; it's just food, albeit tasty-looking food, and if you hunger for thoughts of great meals you're yet to eat this might just provide you with some inspiration.

It feels really strange to have been driven to write about Wakakozake, but somehow it's a show that deserves to be saluted for its small but notable triumph - a quiet yet firmly spoken assertion that a normal, mundane life can be a great one if it's well lived, and that a relationship isn't a pre-requisite of having a good time; indeed, sometimes being able to do what you want, when you want is a boon in and of itself. The series has its comic asides which fit in with each episode and what little occurs within it, but this is mostly just dressing drizzled over the relaxed, feel-good atmosphere of the series - just as Wakako washes her cares away with food and drink, so you can feel a hard day's work melt away as sit down and catch a glimpse of Wakako's own simple pleasures working their magic. We'd almost label it as a "healing" anime series, in its own odd and cheerful little way.

You can currently watch Wakakozake in streaming form on Crunchyroll.