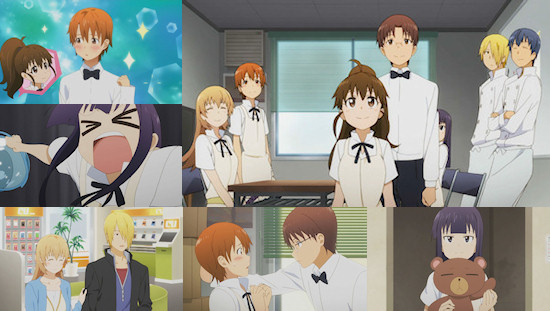 Having amused and entertained us sufficiently during the course of its first four episodes, the rest of anime situation comedy Wagnaria continues on its merry way as it chronicles the day-to-day work of its collection of oddballs (and one normal girl) within the confines of its titular family restaurant.

I commented on my initial review of this series that it's tough to review (but not quite so tough to watch) this show without any reference to its first season, which is sadly still unavailable officially in the UK, and this is perhaps even more the case during moments as series two progresses - the sudden appearance of a cross-dressing Takanashi in particular will probably baffle those who haven't watched the early episodes of this show as there's never really any full explanation of jokes such as this one.

Thankfully, such moments are relatively rare over the course of the series as a whole, and the vast majority of the comedy on offer here is nothing other than entirely accessible and, more importantly, often downright funny.  While not every episode succeeds in delivering wall-to-wall laughs, there's always enough of an undercurrent of entertainment on show to keep you hooked to the show and its characters, but when it hits on a particularly successful idea with a rich vein of comedy to mine the great one-liners and amusing slapstick comes thick and fast to great effect.

The remainder of this series is also rather democratic when it comes to giving its characters screen time.  Aside from the aforementioned normal girl Matsumoto, who only gets reeled out in the final episode to supplement things, all of the main characters get episodes or portions thereof to shine, even if it's arguably the androphobic Inami  and dense but almost relentless cheerful Yamada that tend to steal the show as highlights of a great roster much of the time.

The comedy on show here is always backed up in a very accomplished fashion by its animation, with A-1 Pictures doing a wonderful job to provide a colourful and detailed backdrop to proceedings that only occasionally drifts off-model here and there later in the series - not only is Wagnaria funny, it's great to look at too.

Overall, probably the best word to describe Wagnaria is "accomplished" - even when it isn't being downright funny it still has the knack of hooking you in and keeping you there for the duration with well-realised and entertaining characters and ideas.  This is actually pretty impressive given the limited scope of the series, which rarely ventures too far outside of the confines of its restaurant, creating a series that is arguably greater than the sum of its parts as a result.  There may be anime series out there which are funnier or more creative with their comedy, but there's an awful lot to be said for the consistency of Wagnaria's output, marking it out as a show which will rarely leave you disappointed.

7
It isn't consistently hilarious, but Wagnaria still has enough comedy to mix into its steady, never wavering brand of entertainment to be well worth watching.
COMMENT AND DISCUSS
blog comments powered by Disqus