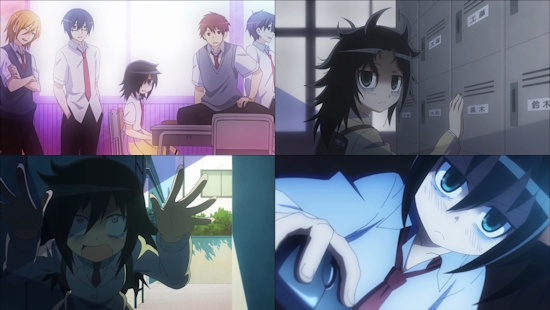 The first draft of this review was a lot more cut and dried than the version you see here, and it was pretty painful to read in all honesty. As fair warning I am going to get slightly personal here but hey, reviews are subjective and trying to discard the personal elements made the first draft read like a bunch of bullet points.

Much like The World God Only Knows, WATAMOTE is a series I am already well acquainted with through the original manga, which I own despite a very dubious proficiency reading the language. I was drawn to it by its almost scarily accurate (if slightly inflated in situation) illustration of social phobia which I myself am afflicted by (at least, according to the NHS). I never imagined it would get an animated adaptation, but was curious to check it out.

The series chronicles the (mis-)adventures of Tomoko Kuroki, a girl entering high school with a head full of delusions about what her new school life will entail built up by years of manga reading and playing dating sims. To say that school life does not live up to her expectations would be a severe understatement, causing the chronically shy and socially withdrawn girl to be buffeted by a continual raft of self-inflicted woes. Tomoko continually struggles with her own desire to be sociable but has no idea how to do so due to internal strife and warped perceptions from a life secluded with media.

WATAMOTE is a keenly painful show to watch due to how unflinchingly it portrays Tomoko’s social anxiety and self-delusion, particularly her internal monologues as they spiral down into painful depths that are both pitiable and understandable. As someone who has had, and continues to have, issues with social anxiety the show is a very awkward kind of mirror to my own life. I hasten to add that I have not gotten myself into anything as outlandish or extreme as most of the situations Tomoko gets herself into, but the thinking she exhibits and her ways of reacting in situations feel only too familiar. The show is labelled as a comedy but I cannot really consider it one - The show cuts far too close to the bone, and has too much truth in it, to possibly be an actual comedy. It feels more like a case study. The show adds to this with a general lack of sugar coating on the events that play out, exacerbating the skin-crawling awkwardness you feel when watching. Tomoko thinks and in fact does terrible and stupid things, but you can always see the through-line to how such things started or were seeded in her mind. A key example is when she thinks her umbrella has been stolen and goes on a mental monologue murder rampage - for all of two minutes until she finds she had left it a few feet away.

One thing that puts this animated adaptation over and above the level of discomfort felt from reading the manga is the pacing, which I feel weakens it overall in terms of watchability. This is primarily due to how it combines multiple short, sharp storylines together to form a normal length episode, with some events wrapping around others or being merged together to make a form of over-arching storyline over the 24-ish minutes. This has a tendency of taking the various, originally taut and razor sharp, individual storylines and stretching them out in terms of both time and development, giving you much more time between setup and payoff. Delaying closure in this way makes some already painful storylines just feel downright cruel in how they play out, both for Tomoko and for the viewer who is watching and has to squirm waiting for the guillotine blade to drop. To use a cack handed metaphor, it is like a scalpel is swapped out for a butter knife when it comes to the execution. This makes the show a lot less watchable overall, especially when it gets into some of the more extreme storylines the series has up it’s sleeve.

As an adaptation of the source material, WATAMOTE sticks very faithfully to the original, for better or worse. Some of the stories told in the original were rather extreme in how they played out, and these are only heightened by the addition of animation, a soundtrack, and additional space to fill out to bridge between different skits. Episode four in particular takes perhaps the worst single storylines in the original corpus and combines them into a very hard to watch single item. You would easily be forgiven for wanting to pause the episode while it is ongoing to have a breather. The episode is also an excellent case of Tomoko getting carried away in her own head with her warped social perceptions and expectations, which can be hard to connect with due to how outlandish they are.

Visually the show looks nice, especially when illustrating any of the more outlandish flights of fancy or mental constructions that Tomoko comes up with, bringing things to vivid life on the screen. I have to admit that I am not much of a fan of the way lighting is shown, which is very reminiscent of the polygonal translucent overlays you might find in Humanity has Declined. They look cheap and artificial to my mind, and stand out far too much in the scene, such that they are usually the first thing your eyes dart to.

The standout part of the show is the opening sequence, a very silly combination of a metal song and a moving metal album cover that is damn fun to watch and one of a few openings that I don’t habitually skip whenever I watch the show. The soundtrack for the rest of the show works well although is overbearing at times. One thing that definitely deserves praise is Tomoko's voice actress, who pulls the role off with almost frightening aplomb, skipping between internal monologue and (much more patchy) verbal speech for the character, giving each its own flavour.

Watching WATAMOTE is honestly more painful than reading the manga, which is saying a lot as the source material already made you feel like your skin was about to crawl right off your body and behind the sofa. Despite this, the manga never quite felt mean, which this series does due somewhat to its re-arranged pace and slow drawing out of each individual arc. This bugs me as it feels weaker overall, not to mention uncomfortable to watch. It’s still an interesting series and should be applauded for not making light of the main characters plight (or her reprehensible actions, either), but you need a will of iron to do so without taking a break.

You can currently watch WATAMOTE ~No Matter How I Look at It, It’s You Guys Fault I’m Not Popular!~ in streaming form on Crunchyroll.

5
No Matter How You Look at It, This Show Is Interesting but Can Be Very Hard to Watch!
COMMENT AND DISCUSS
blog comments powered by Disqus