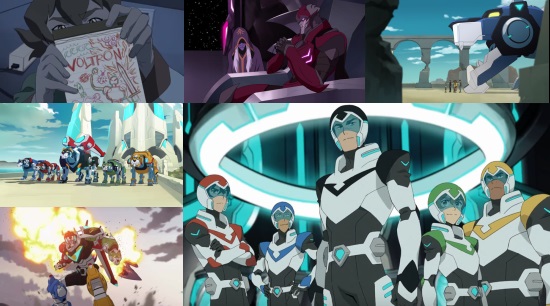 These days nothing seems to make money like nostalgia, with a pretty constant stream of re-booted and re-made franchises making their way to film and television hoping to cash in on the rose-tinted memories of fans. Even the anime industry is not immune to this with this year alone already seeing Nurse Witch Komugi-chan R and a new series of Sailor Moon Crystal to name but two. The quality and success of these reboots tends to vary wildly, often depending on whether they find an audience with existing or new fans and on their faithfulness to the source material. When Netflix announced they were teaming up with DreamWorks to bring the Voltron remake (which has been sat in development hell for years) to their streaming service as an all new animated TV show this perked up a lot of heads. After all, with shows like Daredevil, Jessica Jones and House of Cards under their belt Netflix has proven that they can really hit it out of the park with original content. But how will they handle anime?

At an unspecified time in the future mankind has moved out to explore the stars. Whilst drilling for ice cores, Shiro and his survey team are surprised by a colossal alien vessel bearing down on them and are captured by alien overlord Zarkon. Jumping forwards we find ourselves at the Galaxy Patrol Academy where young recruits Lance, Pidge (really, Pidge?!) and Hunk (all already conveniently wearing coloured outfits) are proving themselves to be pretty much totally incompetent and crash a simulator. Luckily for them they manage to spot an alien vessel crashing to Earth and decide to go take a look. When they arrive on scene Lance identifies the man pulled from the wreckage by the Galaxy Patrol as the missing Shiro, his idol, and with no information other than this the three decide to team up with newly arrived Keith (who is hurriedly given the back-story of being the former academy star who dropped out and went hunting for Voltron) to rescue a man who is never shown to be in any danger from people who were going to presumably be giving him the medical attention he’d need after being in a crash landing...

As it turns out Shiro is also looking for Voltron, and after a brief search the gang manage to find a giant blue robot lion which conveniently decides it likes Lance and tells him how to pilot it through a wormhole to the Altean star system. Here they find Princess Allura, who tells them the history of Voltron and Zarkon and sends them off to seek out the other four lions so they can form Voltron and defeat the alien menace!

I’ll come right out and admit up front that I’ve never really seen the original series of Voltron or Beast King Go Lion (which the series was adapted from ala Macross/Robotech) but the idea of a new mecha show is always intriguing, especially one with such history behind it. Sadly however the series has been pretty badly bungled on most levels. The plot would be okay except that it feels incredibly rushed and tends to throw exposition at you at such a breakneck pace that you can’t absorb any of it, and to make matters worse it’s trimmed down to the bare minimum to the point of not making much sense. "Shiro is my hero" says Lance in the first episode, but we never get told why nor are we given any context of why Shiro would be someone to admire before he escapes Zarkon for example. It’s not really helped by the characters being such broad archetypes either, especially when they prove to be so stereotypical that Pidge must be the smart one because he’s short and wears nerdy glasses and someone called Hunk of course must be big and fat and get sick when they fly around fast. Someone needs to call the writers and tell them to pull their thick heads into the modern times before the next season (should there be one – the show is technically optioned for up to 70-odd episodes) introduces a black character as a servant who talks like Uncle Remus...

On a technical level things are... well, average for an American-produced animation of the modern era - that is to say about a third as well animated and detailed as a 1970s Bugs Bunny short. It’s bland and pretty lifeless, relying on big, over-the-top movements because they aren’t really putting in the effort for subtlety. Being an adaptation of an anime certainly works against the show here as it opens it up for comparison to contemporary anime rather than just its American animation peers, and contemporary anime at the moment comprises of everything from Kabaneri of the Iron Fortress to Flying Witch and almost all of it blows Voltron: Legendary Defender’s production values out of the water. Things get better in the action scenes and when Voltron itself shows up the production team are obviously much more capable in their use of CG and things do become pretty dynamic, but again you do have to note that the models are pretty simplistic and there’s another little series out at the moment that’s also doing transforming robots called Macross Delta. I think we can all see how that comparison is going to turn out.

As mentioned before I’m not a fan of the original so whether this does enough for the fans to be happy I’m not sure, but honestly I doubt they’ll be all that satisfied with this. It feels much more like a random show for 6 year-olds that’s had the Voltron name and imagery attached because they weren’t doing anything else with the licence, so why not? You could argue that that’s not in or of itself a bad thing as, let’s be honest, the original series was made for kids (though in this day and age I don’t think that’s much of an excuse), but even kids deserve more thought and effort in their story-telling and they certainly shouldn’t still be getting such unforgivable character stereotyping in modern programming.

3
These lions are toothless.
COMMENT AND DISCUSS
blog comments powered by Disqus