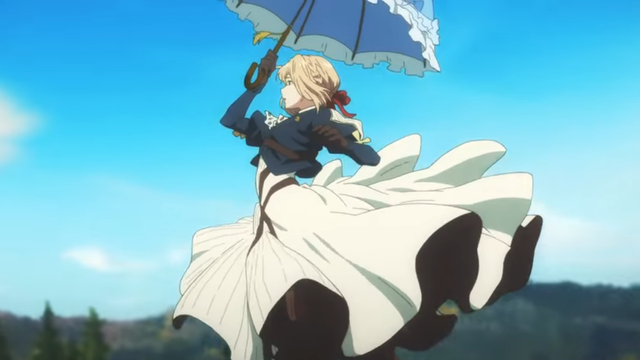 Violet Evergarden created something of a stir when Anime Limited first announced that they had acquired the series last year. Not only was it announced before it had even begun airing in Japan, but they followed up by showing the very first episode at October’s MCM London Comic Con. And what a first episode it turned out to be, the Platinum Theatre and soon the wider western anime watching world were abuzz with hype about the series. Following the premiere came the news that Netflix would be simulcasting the series in the UK. Though, surprisingly, not the US, where it would follow the now traditional Netflix model of making the whole series available at once after the Japanese run, something which caused quite a fuss over the pond. So, is the series worthy of all the hype?

Based on the award winning Kana Akatsuki light novel, the story follows the titular Violet Evergarden and her difficulties adjusting to life in the the civilian world, after spending much of her adolescence at war fighting for the Leidenschaftlich Army. Violet lost a great deal during the conflict, not least of which were both of her arms, now replaced by rather dextrous mechanical prosthetics. During the war Violet served under Major Gilbert Bougainvilleam, who foresaw the end of the war and - due to Violet lacking a family of her own - made plans for Violet’s post-war life: arranging for her to be adopted into the Evergarden family, in the country’s capital city of Leiden.

With the war over and the Major now out of her life, Violet struggles to acclimatise to a world without his orders, a world where she can no longer be with him. Rejecting her adoptive Evergarden family and struggling to live a life without orders, Violet ends up working as an "Auto Memories Doll” for one of the Major’s old colleagues, Claudia Hodgins, at the CH Postal Company. The dolls of CH Postal Company are essentially ghostwriters for hire, offering a letter writing service for those who either cannot write themselves or simply need a professional touch. Violet quickly learns to use a typewriter, with her new arms and hands making short work of the task of typing, but does she have the temperament and emotional intelligence required to be a doll? (Though quite how a country which can produce such advanced prosthetics as Violet’s can also suffer from widespread illiteracy, and still require letters to be written on typewriters, stretches your ability to suspend disbelief somewhat.)

Violet initially fails as a doll, because she doesn’t understand emotions due to her experiences in the military, which have stunted her emotional growth, but that doesn’t stop her. She perseveres, determined to learn that which she does not understand. It is that determination which enables her to continue living despite feeling as though she lacks a purpose without orders, this is powered by the desire to learn the meaning of the Major’s final words to her: “I love you”. But at what cost will that knowledge come? Understanding emotions will mean understanding the emotional impact of the war, both on herself and on others...

Therein lies the core of Violet Evergarden, Violet’s journey from being an emotionless tool of the military to being a functional member of society. One who can understand and reflect on the impact of their actions, as well as feel empathy towards others. It’s quite the ride, there are more than a few tear-jerking episodes, and at times you will feel for the characters along with Violet. She has no shortage of help on her journey, intentional or otherwise, especially from the other workers at CH Postal Company. From assisting with the deliveries to shadowing the other dolls on missions, Violet turns everything into a learning experience and grows throughout each episode.

However, the series takes its time world building and takes a while to begin telling its story in earnest. This can be explained partially by the complexity of Violet’s situation, which requires a slow and careful unveiling. However much of the time - particularly in early episodes - is taken up with incidental details and lingering, albeit beautiful, shots showcasing the series’ animation. Thus the gentle build-up offered by the opening episodes may prove a little too sedate for some. While the careful treatment and introduction of the characters enabled by this slow introduction aides the later episode’s impact, the viewer can’t escape the feeling that parts of this series begin to drag unnecessarily. That said it is well worth sticking with, and one thing that will help keep you watching is the breathtaking animation. Much praise about the animation quality was heaped onto the series prior to its release, but even so you can’t help but be in awe of what Kyoto Animation have achieved here. Every single scene in Violet Evergarden is truly stunning, it really is a work of art, the character designs and backgrounds are simply beautiful. If all this series had to offer were its visuals then that would still be reason enough to watch it...

Visuals aren’t the series’ only asset though, Violet Evergarden offers drama, action and even the occasional drop of comedy. The final third of the series in particular provides a real dramatic tour de force, enough to satisfy any viewer. However, the ending itself proves something of an anti-climax, which can’t quite live up to what came before. This sees the series feeling like it’s running out of stream somewhat before the final credits roll. Though perhaps, if anything, that’s less a criticism of the ending than it is praise for the preceding episodes, which are truly spectacular in places.

What we have in Violet Evergarden is an emotional and engaging series, which is beautifully realised. There are perhaps three or so episodes in particular which could be described as masterpieces, if the whole series were at the same level then Violet Evergarden would easily earn a perfect score of 10/10. However, the slow start and anti-climactic ending lets the series down, this is a series which takes too long to get going and then lingers too long on its conclusion. A couple of episodes worth of content could have easily been shaved away, to leave a much more concise and stronger series in its wake. Perhaps Violet Evergarden is a victim of its own success, such that nothing else it does can come close to its best moments. Whatever the reason the ending feels like a disappointment, and the opening episodes make the series at times difficult to stick with. All in all Violet Evergarden is a very good series, but it could so easily have been a great one.

You can currently watch Violet Evergarden in streaming form on Netflix.

8
Beautifully animated and emotionally engaging, your orders are to watch this series!
COMMENT AND DISCUSS
blog comments powered by Disqus