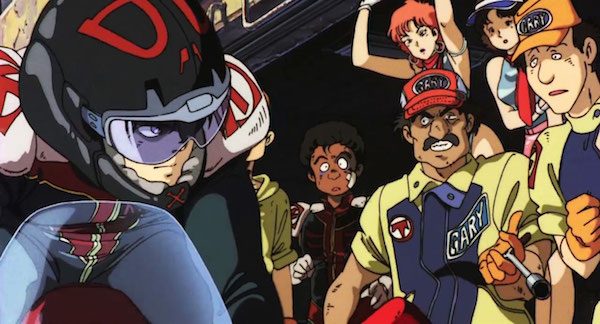 As an anime fan in my 30s - and one that has been fortunate enough to have seen a plethora of 80s and early 90s series - it was quite interesting to see what people think of this somewhat unknown late-80s science fiction film when it was screened at the Edinburgh Filmhouse, as a part of Scotland Loves Anime 2017.

Venus Wars - originally released back in 1989 - was the first film to be shown on the busy Saturday schedule and was, as you might expect, filled with the usual mix of adults both, young, old, and even a few children. The thing about Venus Wars is that, despite earning a PG certificate from the BBFC back in 1992, it is almost certainly not suitable for children in this reviewer’s opinion.

The film starts with a good solid introduction. In 2003 a large ice comet, the size of a small moon, struck the planet Venus. This caused the planet’s acidic atmosphere to improve, seas to form, and the planet to start spinning at a higher rate. Therefore the comet’s impact had the good fortune to allow Venus to be terraformed by humans. And by the year 2089 the planet is home to millions of people split into two nations, Ishtar and Aphrodia. As is want to happen when humans are involved, these two nation states are at war with each other, and this war is about to take a violent turn for the worse.

We begin our story with a journalist from Earth, Susan Sommers, arriving at the Aphrodia capital Io. She is here to cover the war for her company back home. Play forward and we meet the rest of our protagonists, a rag-tag group of monocycle racers who use their single-wheeled racing motorcycles to fight in a capture the flag style race at a local stadium. The Killer Commandos, the home favourites, are battling their local rivals when hostilities commence. Massive aerial carriers are seen above Io and they release huge tanks around the city. Beginning a massive bombardment of the city, its defensive forces, and the stadium. Hiro and his team barely make it out alive.

Following a bloody, but short, battle and subsequent subjugation under the Ishtar forces, the government caves in and things quiet down. Hiro and the Killer Commandos turn themselves into a guerrilla warfare squad and plan an attack against the tanks securing the stadium. Their monobikes give them excellent manoeuvrability, and with some light armament the squad manage to take out one of the tanks. However, in the process they take heavy casualties and find themselves massively outgunned. While trying to escape they are saved by the Aphrodia freedom fighting force, and what remains of the Killer Commandoes are conscripted into the service. Then the fightback begins anew.

Venus Wars is of the same generation as Dominion Tank Police, Cybercity Oedo 808, and Megazone 23. These just happen to be some of my favourite films of all time. The tank design especially would not look amiss in Dominion Tank Police, and I half expected Bonaparte to make an appearance (with Anna and Puma of course >^_^<). The animation and character designs are perhaps a little dated when compared to more modern titles. Though considering that the entire film was cel animated, with no help from CGI, it is quite a refreshing to feel that the highly detailed tank battle scenes - with tanks featuring more turrets than sense - were all crafted by hand. While a bit dated the smoke, fire, and explosions during the more animated battle scenes are all rather pretty.

All of the battles are accompanied by a heavy rock and vocal ballad soundtrack, which was directed by Joe Hisaishi. Who is better known for his work with Studio Ghibli (Nausicaa, Totoro, Princess Mononoke, etc). Not what you would normally expect given his Ghibli output, but it is a fun soundtrack which worked very well in the cinema.

While I found the character design, art style, and soundtrack to be great, the writing is a bit of a let down. While I appreciate that things were different in the 80s the overt misogyny and homophobia is rather difficult to swallow. At some point the writers decided to make an AIDS jokes (bearing in mind that this was 1989 during a period of fear about the disease) and write in a short-term character who is overtly gay, before proceeding to kill him off in a rather un-heroic manner. During the screenings there was some rather uncomfortable shuffling in seats, to say the least. The film also relies heavily on Mary Sue characters which, while not uncommon for the time, isn’t exactly compatible with today’s audience. What was acceptable in the 80s, isn’t acceptable now.

These problematic issues aside, I still find Venus Wars to be a lot of fun. And despite this not being my first viewing of the film (thank you SciFi channel in the mid-90s), it is the first time on the big screen. To quote myself after the film “That was ace!”.

At the time of writing, it’s not known whether there will be a new home video release, and, I am not sure if I would watch it again. Though it is good to see some of these older films getting more exposure. I just hope that we get more releases of anime classics…