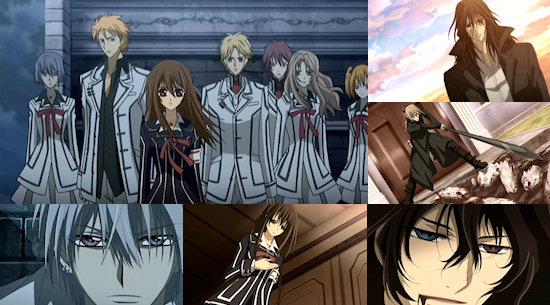 After seven DVDs worth of blood, bitter rivalries and barely concealed emotions, Vampire Knight's anime outing finally comes to an end with this final volume of Guilty with more than a hint of menace in the air - are we all set for a gripping and spectacular finale from these three climatic episodes?

With a resurrected Rido on the rampage at the forefront of some decidedly political machinations behind him, the overriding question that this volume poses is one of Yuki's safety - or perhaps more importantly, who will be her hero in the face of such danger?  Kaname certainly seems to have confidence in the plans he has so carefully laid out and put into place throughout the entirety of the series but whether his face is justified remains to be seen, particularly when it comes to Zero's own plight as it pertains to his twin brother and a decidedly hefty case of sibling angst.

Unsurprisingly, as this volume builds up to its big finale we find all of the major characters joining forces in the face of the issues before them - although of course with some of the tensions which have run through the series there are some uneasy truces on show, while some individual's ability to overcome other obstacles becomes paramount as the final battle against Rido gets into its full swing.

There's always the danger when any anime adaptation of an on-going manga series comes to a close that it'll leave the viewer with a bad taste in their mouth on account of a wishy-washy, non-existent or otherwise sub-par ending.  Thankfully, Vampire Knight Guilty manages to side-step this by delivering a conclusion that still leaves room for the anime to continue in the future while still resolving its major issues and questions in a mostly satisfactory manner.  Okay, if you were hoping for an ending that conclusively pairs our heroine with someone you might be left a little frustrated, but that aside the curtain is drawn on the series with sufficient closure for my liking.

That isn't to say that everything about the show's big finale hits the spot - some of the twists and turns exhibited by these final episodes feel a little far-fetched even for a series about vampires as they edge towards deus ex machina-like proportions, and Kaname's constant "just as planned" proclamations tend to lessen the impact of big moments as they're all but shrugged of with a "so what" by his attitude.

When push comes to shove however, Vampire Knight Guilty has been a pretty entertaining viewing experience filled with melodrama and "proper" blatantly sexual vampire fare much like its immediate predecessor.  As a series, it didn't get everything right, and its animation style and quality seemed to be stretched when it came to depicting anything even vaguely action-packed (while its DVD transfer also struggled on frequent occasions), but our general conclusion of the series is one of satisfaction thanks to its blend of elements that should draw in anime lovers of either gender despite the franchise's primarily female fan base.

Japanese and English audio with English subtitles are all we get on yet another Vampire Knight release barren of extras.

7
A broadly satisfying ending to a largely entertaining series, which should keep fans of the franchise happy.
COMMENT AND DISCUSS
blog comments powered by Disqus