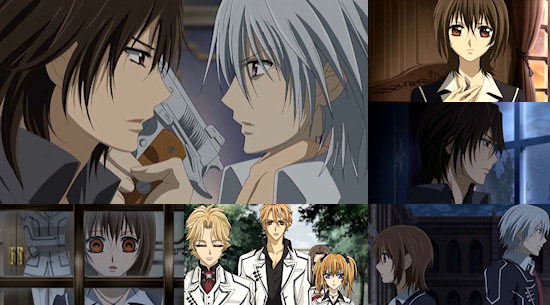 The opening volume of Vampire Knight's second season brought us perhaps the best the series has had to offer yet, lighting a fire under the love triangle which encompasses Yuki, Kaname and Zero and leaving that fire burning until the whole situation was sizzling hot.

For this second volume of Guilty the fire becomes more like a bunsen burner for much of its duration, with its flame squarely centred towards the put-upon Yuki Cross as her importance to the increasingly ominous goings-on which surround her become clear.  To start with, this seems to be entirely a personal battle on Yuki's part as she struggles to come to terms with the missing memories of her childhood and the increasing occurrences of voices in her head which haunt her, but these happenings soon prove to be important to the wider happenings at Cross Academy.

Over the three episodes contained on this DVD, we finally get to start unravelling Kaname's plans and machinations and, more importantly, the reasoning behind them - although these plans only serve to further scramble Yuki's already decidedly confused emotional state.  This gives way to a scenario that creates peril not just for Yuki, but also Zero and Kaname himself courtesy of the reappearance of a couple of familiar faces, even if one of those faces might not quite match up with their normal occupant.  These three instalments work doggedly towards building up to the half-way point of the series, and at least one huge moment which serves as a big cliff-hanger for the remainder of the show.

After operating at its sexually-charged best in volume one, Vampire Knight Guilty was inevitably going to shift away from that side of things to some extent in deference to other matters and plot threads, but in fairness to these episodes it does a pretty decent job of it - Yuki and Zero's bonds to one another and Kaname are all put to good use in terms of driving the emotional and dramatic core of the series, while the events which are building around them look set to be suitably intriguing to surpass the rather weaker story which dominated the latter half of series one.

Of course, if you're already a fan of Vampire Knight then you probably won't need to be told what this series does best - angst, smouldering looks and so on offset with occasionally moments of light-heartedness which do tend to feel a bit forced but nonetheless do their part to break the tension, if only briefly.  That this appears to be built around a solid backdrop in Guilty bodes well for the remainder of this second series - hopefully it won't make the same mistakes it did first time around, but for now it has us drawn into its world to a commendable degree.  If only there were more than a measly three episodes on the disc...

English and Japanese audio with English subtitles are all you get on this release which is otherwise bereft of extras.

7
This series continues to build upon its solid start, mixing up its romantic machinations with some deeper, darker plot points.
COMMENT AND DISCUSS
blog comments powered by Disqus