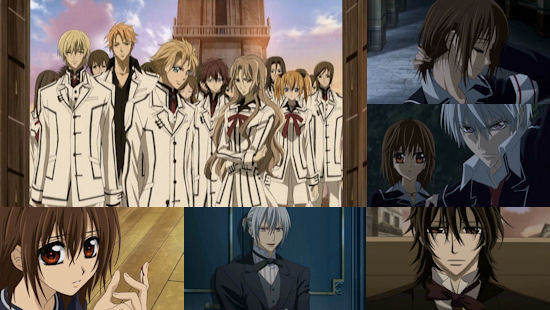 No sooner had Vampire Knight's first season come to an end did we receive confirmation that the second series of this manga-to-anime adaptation, subtitled Guilty, would also be hitting the UK.  Thus, here we are with the continuing tales of Yuki Cross and the largely vampiric company which she keeps.

Guilty begins just a couple of short weeks after the first series ended, marking the return of Zero to school after finding his transformation into a "Level E" slowed and temporarily reversed after being given the opportunity to feast on Kaname's blood at the climax to the last season.  Naturally, Yuki is happy to see Zero back in business as though nothing had happened, yet she still finds herself troubled by her lack of knowledge of exactly what happened in the aftermath of Shizuka's death, while Zero himself is nagged by the sense that something is amiss as Kaname's blood courses through his veins.

Shizuka's demise hangs heavily over the early episodes of this volume with the suggestion that there was more to her endeavours than initially meets the eye, and of course Kaname's own goals are also brought into question with even his fellow Night Class dwellers seemingly uncomfortable with what Kaname is doing for some very different reasons.  Come the end of the volume it seems as though all of our major characters are under threat from some entity or other, with plenty left to be revealed throughout the remainder of the series.

For all its foreshadowing of things to come however, Vampire Knight Guilty's first volume once again focuses much of its attention on the relationship triangle involving Yuki, Zero and Kaname, with the events of the first series really ramping up the complexities and passions at the heart of those various entanglements.  This makes for a hugely sexually charged quartet of episodes which serves the series well - as I mentioned in my review of the final volume of the first series, Vampire Knight is at is best when it traverses the traditional vampire story route where everything is an allegory for sex, and this particular volume pulls off that scenario almost flawlessly.

In terms of the actual DVD itself, the presence of just four episodes and a single disc is hard to swallow in these days of entire thirteen episode series being released in a single collection, and the lack of extras and poor video quality (which is arguably worse than the first series) doesn't really help matters - Studio Deen's animation quality isn't the most stellar at the best of times and it isn't helped by a slightly ropey transfer here.

Although Vampire Knight Guilty is no visual tour de force, the episodes contained within this first volume are the best the franchise's anime adaptation has had to offer so far as they simmer with tension between characters that threatens to boil over at any moment.  Hopefully this series will continue to focus on those aspects of its story as they're by far the strongest - if it manages to do so then this could be a real treat for Vampire Knight fans, and indeed anyone who loves a good vampire tale.

English and Japanese audio with English subtitles is all we get here in an other-wise decidedly extra-free zone.

7
Once again, Vampire Knight is at its best when it focus on the Yuki-Zero-Kaname relationship triangle; a promising start to this second season.
COMMENT AND DISCUSS
blog comments powered by Disqus