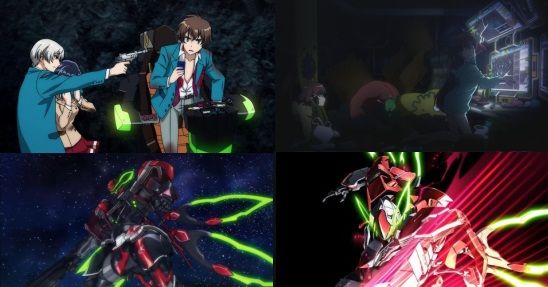 It feels like it’s been a long wait for action fans but after a stream of moe titles, this season look set to deliver that adrenaline hit we’ve all been waiting for. What's more, the mecha genre is back with several series stepping into the Gundam-shaped hole. So with pressure already mounting from the superb Attack on Titan, and Majestic Prince coming up from the rear, can Valvrave the Liberator come out with all guns blazing?

It is the cosmic era. Whilst two rival factions step cautiously to the brink of war, a neutral colony is violently attacked by a co-ordinated assault team hunting for a secret mech under construction. Kira Yamato and his friends become unwittingly..... sorry, what series were we talking about again? You’ll have to forgive me but Valvrave’s first episode is basically a full-on remake of the opening to Gundam Seed in pretty much every way, only with a few names changed. Seed had 5 commandos storm the colony – so does Valvrave. Kira had a group of friends who helped him sort out the Gundam - so does Valvrave’s Haruto. It honestly feels like they couldn’t quite figure out how to kick off the series and decided that ‘Gundam did it well so we’ll do it that way’.

That’s not to say that this continues throughout thankfully, as by episode two the story has mostly spun off on its own; however, when it starts weaving in body-swapping, vampires, one-man armies, mechs that get more powerful after they’ve overheated and stopped working and people who can tell the future.... there’s a palpable feeling that no-one on the creative team really knows where the series is going. Whilst this does mean that the story is refreshingly unpredictable, it also means that it doesn’t quite seem to hold together particularly well as a whole. There ‘s also an interesting use of social networking built into the show, which is one of the more intriguing aspects of the series, though whether this will be built upon in later episodes or just left by the wayside remains to be seen. Don’t get me wrong though, the series is still pretty good fun to watch but it feels more like the creative team has decided to cram as many ideas into the series as possible in the hope that some of them will stick and look original rather than actively writing a cohesive narrative.

The action scenes are a little unbalanced though, as the scenes with the humans feel a lot more intense that those utilising the mecha which, by contrast, feel much more leisurely. This isn’t really helped by the fact that L-elf, one of the Dorrasian commandos who attacks the station, seems to be much more powerful than the mechs despite the Valvrave pulling new attacks and abilities out of the bag every time we see it in action, making these giant robots seem almost like they was added through a box-ticking exercise.

On a purely technical level everything is exactly as you would expect from Sunrise, the creative team behind such works as Tiger & Bunny, Code Geass and (who would have thought?) Gundam Seed. Everything looks amazing, with crisp and fluid animation and some great (if not wholly original) character designs. The mech aren’t quite up to the usual iconic designs we’re used to, but then I’m willing to overlook this in the face of such amazing production values across the board.

Valvrave is, then, not a perfect series by any stretch of imagination. Whilst its production is arguably superior to other shows and it certainly knows how to bring the action, it lacks the consistent storytelling of its contempory rivals. It’s certainly going to be interesting to see how (or perhaps if) the creative team are going to manage to weave all of these story elements together, and I’ll certainly be more than happy to eat crow if this series manages to pull it off. But for now this is one to file under ‘keep an eye on’ rather than ‘must-watch’.

You can currently watch Valvrave the Liberator in streaming form on Crunchyroll.

6
An awkward first few steps for this series, but it might just need time to work the kinks out.
COMMENT AND DISCUSS
blog comments powered by Disqus